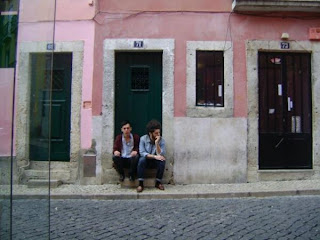 I was first introduced to La Shark through a friend and as much as I thought I'd pass I'm oddly hooked. La Shark have a very alternative sound and people keep coming back for more.

I have yet to see the band live but from seeing them in videos and interviews you can tell that the band have a great rapoor and all of this means that they have a loyal following of fans that keep coming back.

They only have a few songs out at the moment but they are those type of songs that people don't mind listening to again and again. For instance, their debut single "A Weapon" has a....interestingly thought out video but you can get past that. Videos don't have to be watched if you don't like them. As I've found with a lot of La Shark's songs, the melody is a highly catchy draw and it is quite easy just to listen to the music and drift away into their world.

La Shark do some to enjoy slightly quirky videos but in my opinion that just serves to add to their draw. They could do well for themselves as presenting themselves as a quirky alternative band and they seem quite happy to do that. I look forward to hopefully meeting them one day and will definitely be going to a gig of theirs!

Three stars from me. Not my usual music but oddly drawn in!
Email Post