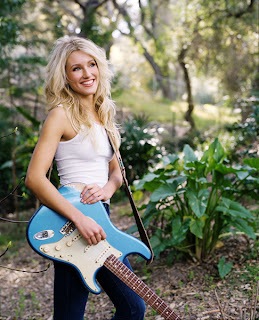 Whitney Duncan is a twenty-six year old who is currently signed to the Warner Bros label. She was originally signed in her senior year of high school and recorded few songs. This spawned her beautiful duet with Kenny Rogers entitled "My World Is Over" and really introduced her to the world of country music.

Once she signed to the Warner Bros label Whitney began working on an album. Her first single "When I Said I Would" is a true anthem. Up-beat and gutsy, "When I Said I Would" is a song that you can loose yourself in. It has a really good powerful message and is a song that should certainly be on everyone's MP3 player. Off the back of this success Whitney has released two more singles, both of which have been successful but not quite so much.

Not just a brilliant singer, Whitney has also written both a lot of her songs and songs for other successful artists. The song that she duets with Kenny Rogers on, "My World Is Over" was written by her, as was the song "Making Circles" written for Christian Kane (one of the stars of tv show Leverage) As well as getting her own music out and about, Whitney's song writing skills mean that her name goes out to a lot wider audience.

Whitney has a new EP out entitled "Young In America". There are only four songs, but after her troubles with her record label these are very good. The title track, "Young In America" is very gutsy and has a tune which keeps listeners coming back. Three of the songs stick with Whitney's usual up-beat melodies but then "Where The Back Roads Run" serves to prove to any doubters that Whitney Duncan is not just a one trick pony. The song has a beautiful slow melody and lyrics that really draw people in.

Whitney is a prolific tweeter and never hesitates to reply to any questions and comments from her followers. You need only read some of her tweets to get an idea of how laid back she is and how much of a sweetheart she seems. I hope that Whitney really does continue to get her name out there, she really is a brilliant singer songwriter.

I give Whitney a very healthy five stars - can't wait to hear more from her!
Email Post