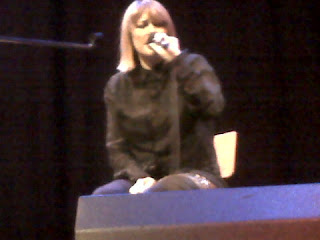 I will admit that I don't listen to the music of Cerys Matthews much but after having gone to an amazing gig of hers at the High Wycombe Town Hall last night I have vowed to change that.

A lot of people will most likely know Cerys Matthews through her years in Catatonia but there is obviously a lot more to her than that. It was easy to tell by how she acted that night that she felt a lot more comfortable performing for the small audience gathered in the Town Hall than she would necessarily have done in the huge stadiums that Catatonia used to fill.

The evening as a whole was so relaxed and it was a brilliant atmosphere to just be able to relax and have a good time. It was easy to get the impression that if she didn't feel like she had to sing Cerys would quite happily just sit there and chat to the audience the whole night, something that is refreshing to see in an artist that has been in the music business for as long as she has. 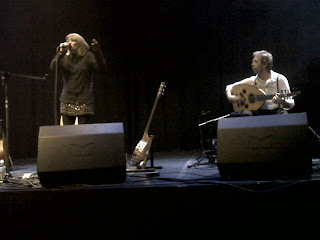 It was lovely to see that Cerys obviously felt incredibly comfortable with her amazingly talented band aswell. She only had two guys with her (proof that you don't need a huge band and a great big production) but happily laughed and joked with them throughout the whole evening. Both the members of her band are incredibly talented in their own right. Frank Moon on the ute and guitar was brilliant and Mason Nealy proved that you can play almost any instrument if you set your heart to it. You can sometimes find members of bands that set out to overshadow the lead singer but this was obviously not the case with Mason and Frank and they are a credit to themselves and to Cerys.

Of course, being Welsh, there were some Welsh songs featured in the setlist that night. There was a mix of Welsh speakers and people who didn't know a word of Welsh in the audience but you could tell that both ends of the spectrum truely enjoyed themselves and the Welsh songs were the type of songs that you didn't need to completely understand, you could just simply get lost in the rhythm of the song and Cery's gorgeous lilting voice. 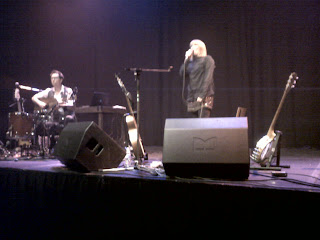 While a lot of the songs Cerys sings are very lilting and carry you along beautifully, she also proves that she is not afraid to let loose with a voice that is actually extremely strong and powerful. In this way she makes sure that the audience are kept guessing and that they keep wanting to come back for more. She sings a lot of folk songs but she also alternates between traditional Welsh songs, traditional Spanish songs and country influenced songs.

Cerys finished the evening with a beautiful rendition of "Love Me Tender" which had the audience so quiet that you could hear a pin drop all of the way though it - absolutely amazing. I just think it's sad that many people still don't know who Cerys Matthews is without being told that she used to be in Catatonia. A definite five stars from me, Cerys is an amazing singer and it was an amazing and comfortable night with brilliant music. I'd definitely love to go see her again soon! 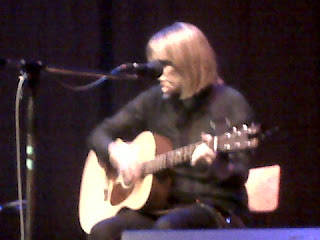