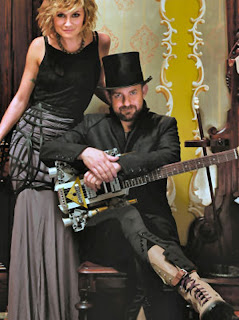 I was first introduced to Sugarland through the music of Lady Antebellum. The group comprises lead singer Jennifer Nettles and backing singer and all round muso Kristian Bush. While they are similar to Lady Antebellum in that they sing the same kind of music, there is however much to set Sugarland apart. Jennifer Nettles' voice for instance is a lot more Southern than Lady Antebellum's female lead Hillary Scott (Jennifer hails from Atlanta, Georgia)

Sugarland started life as a trio (with the inclusion of Kristen Hall). Kristen left just before the band started to receive huge success. They were originally signed to Mercury Records in 2004 and broke through with their first single "Baby Girl". It is a very sweet song in general with a catchy chorus and a perfect debut single. Their debut album was then also certified as double platinum. It was after this album that Kristen Hall left the band.

After Kristen's departure the duo went on to release three more albums, "Enjoy The Ride", "Love On The Inside" and "The Incredible Machine", the latter being released in October of last year. All of their albums and songs have led to them receiving many awards. The song "Stay" from the album "Enjoy The Ride" was the first song to win Sugarland both an award for top country song and then the award for songwriter . It was also the first time in quite a few years that a woman had won this award (the song was written singularly by Jennifer Nettles)

Sugarland have a lot in their albums to keep people coming back. They know how to mix their albums up well with different tempos and types of songs and as a listener you get the impression that they have thought hard about all the songs and none of them are simply "fillers".

One thing I like about Sugarland is their ability to do covers. They don't fill their albums with covers (in fact there are only two on "Love On The Inside" and the rest are on the live album "Live On The Inside"), but when they do sing covers, they do it in a country style. Perhaps my favourites of theirs are the cover of Beyonce's "Irreplacable" and of Kings Of Leon's "Sex On Fire".

I haven't been able to see Sugarland live unfortunately. They are huge in the US but don't command quite such a following over here. You can tell from seeing videos of performances and interviews that they bring so much energy to the stage and they don't take themselves too seriously either, something that is often missing in modern music. LOVE Sugarland so it's got to be five stars from me!
Email Post