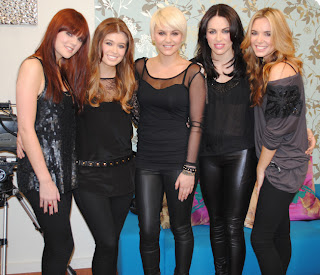 Soon after Wonderland were formed it was announced that they would be launched with a reality television programme entitled "Louis Walsh & Kian Egan's Next Big Thing". The show was a great success and in my opinion it was a brilliant idea. It is different to what bands would normally do and was a good way to make sure that Wonderland stood apart from the other girlbands that are around at the moment.


Wonderland are very much a pop band however they are not just another carbon copy of the typical current girlbands. They have a strong focus upon acoustic music and harmonies and obviously work well as a team. They have recently released their debut self-titled album and have many covers in their work but this doesn't put you as a listener off, in fact, I've found it does quite the opposite.

They have created beautiful arrangements of some very popular modern songs and each one of them gets the opportunity to show off their vocal skills on the album. Perhaps my favourite song on their album is the band's cover of Lady Antebellum's "Need You Now". The harmonies are very skilled and it is different to hear the song from five females rather than one female and two guys in Lady Antebellum.

The band as a whole have a brilliant rapoor between all of them, most of which was seen on their reality tv show but you can also see that from various performances and interviews of theirs.

There is enough out there of Wonderland to form an opinion of them and I definitely look forward to hearing more from the five girls. Four stars from me!
Email Post