In the round with Sherrie Austin, Alana Springsteen, Melissa Peirce and Alissa Moreno - Bluebird Cafe, Nashville 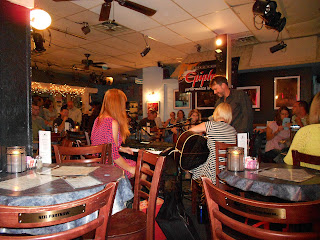 The Bluebird Cafe is a relatively small place situated in Nashville, Tennessee. Despite the small size, the Bluebird Cafe has been instrumental in the careers of many of country music's biggest stars, including Kathy Mattea and Garth Brooks.

I visited the Bluebird Cafe on 11th July and was treated to an evening with Sherrie Austin, Alana Springsteen, Melissa Peirce and Alissa Moreno, all of whom are brilliant singer-songwriters.

Sherrie Austin is a name known to many fans of country music. She is a brilliant singer-songwriter in her own write and has also written many hit songs including Shotgun Rider (Tim Mcgraw and Faith Hill) and her own hit One Solitary Tear. Perhaps one of my favourite songs from the whole night was Sherrie's title song from her newest album, Circus Girl. It is a very well written song and suits Sherrie's voice well.

11-year old Alana Springsteen held herself well alongside Sherrie, Melissa and Alissa. Alana has been writing and performing for a few years but is perhaps most widely known for performing Sugarland's hit Baby Girl with them on stage recently. Her voice is still inexperienced which is understandable but she can play guitar amazingly. I did think it was a little strange to hear her sing about love and heartbreak considering her age as many of Taylor Swift's earlier songs are about bullying and young love for instance. 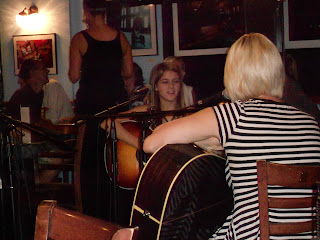 Melissa Peirce was a name I didn't immediately recognise. I was however very excited when Sherrie Austin said that Melissa would be singing a song she had written for David Nail entitled Red Light. I am a big fan of David Nail's so immediately recognised the song and was excited to hear Melissa sing it. She didn't disappoint and it was nice to hear the story behind the song, something that you don't always get to hear.

The group was rounded off by Alissa Moreno. Whilst Alissa has written with - and for - many stars (Colbie Caillat and Chuck Wicks to name a few) she also writes many songs for television. Her songs have been featured on shows such as "Laguna Beach", "Dancing With The Stars", "Will & Grace" and her first single, Far From Here, was also licensed as the theme tune to "Army Wives". Melissa has also acted in a selection of films. She has a very interesting voice and I found myself drawn to her songs.

All four singer/songwriters were very impressive and bounced off each other well. The Bluebird Cafe is a very unique venue. It's small size makes it very intimate and you are warned before the show starts that you will be 'shushed' if you talk, something that is nice to see. I also loved the idea of having the artists in the middle, it means everyone can see something and gives the evening a more relaxed feeling. If anyone ever gets the opportunity to go to the Bluebird Cafe I would definitely recommend it, it was certainly an experience not to be missed. It would be lovely to have an intimate music venue like this in the UK. I'm sure it would be well received and would help support the increasingly popular country/folk scene.