Continuing on from my feature on Kristina Kidd I managed to catch up with the up-and-coming singer/songwriter and ask her some questions....

1) What song do you wish you had written?

I always wish that I had written the songs that say something in a really different way. When I first heard the pop band The Script's song, "Breakeven," I remember thinking, man, what a great idea for a heart break song.

2) Who are your influences?

I grew up on Reba, Dolly Parton, Alan Jackson and Garth Brooks, so I pull a lot of who I am from them. I also really love Miranda Lambert and Lady Antebellum as far as today's new artists go. And I will forever love and study Johnny Cash. I think he's one of the most influential writers, performers, and people that country music has ever had.

3) When did you first realise you wanted to become a singer?

When I was a little kid I always was running around the house singing and making up little songs. When I was about seven I started singing karaoke at a little restaurant in town and I think that's when I realized that I wanted to always do music.

There are so many artists that I admire and respect. I think to bring my childhood dreams full circle though, I would have to collaborate with Reba. That would just make me happy as a clam.

5) What is the first song you wrote and when did you write it? 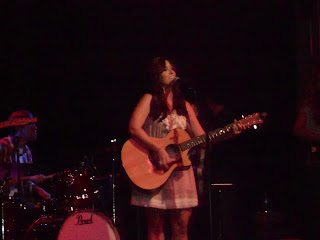 6) How do you deal with nerves before a performance?

I don't really get nerves before a show, it's more of an adrenaline rush being on stage. I'm usually joking around before a show or fiddling with something that I don't ever have time to think about nerves.

7) What are your goals as far as your musical career?

Musically I would love to always be respected as a great songwriter and a good person. I think that's as much as anyone can ask for in this field.

8) What's the best part about being a musician?

The best part is being able to wake up and have an opportunity to do what you love and express yourself creatively.

The worst, or I guess hardest, part is having to always believe in yourself.

10) What advice would you give for someone who wants to make it as a musician?

Grow thick skin but keep a good smile and a kind heart, you'll need it all. Ha! 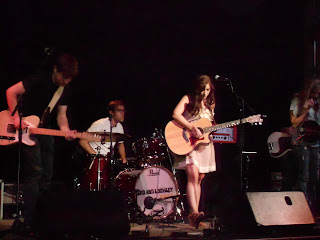 Kristina's debut EP Burn The Map is currently available from iTunes UK and as an MP3 download from Amazon UK. The EP is definitely worth buying and I'm sure Kristina will do very well. ﻿
Email Post