Pistol Annies are an American country group comprising Miranda Lambert, Ashley Monroe and Angaleena Presley. Their debut performance was during the Academy Of Country Music's Girls' Night Out: Superstar Women Of Country special which aired on CBS in America on 4th April last year. Fans of country music will already know the name Miranda Lambert. She has had a lot of solo success and has a voice that in my opinion is easily recognisable.

The group's debut single Hell On Heels is also the title track of their debut album. The single was released on 12th June last year and that was followed by the album on 23rd August. The song as a whole has a very 'Southern' sound, almost bluesy. The group's voices blend together effortlessly but still also manage to stand out from one another. With lyrics such as 'I'm Hell On Heels, Sugardaddy I'm comin' for you', Pistol Annies deliver a gutsy song that makes you want to keep listening to it. 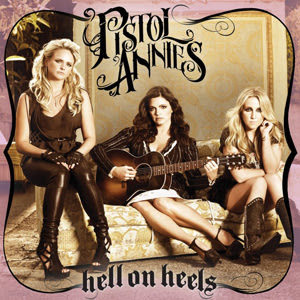 Boys From The South is another very strong song from the album. Miranda Lambert takes the lead on this song and her voice really suits the lyrics. All of the Pistol Annies songs use instruments cleverly and Boys From The South is no exception. Lemon Drop is also worth listening to. The spoken 'Thank God' at the end of the end of the song ties in well, with lyrics such as 'my life is like a lemon drop, I'm sucking on the bitter to get to the sweet'.

My least favourite song from the album is probably Beige. Lyrically it is a good song however I found myself waiting for more from it. Melodically, it does seem to stay pretty much the same throughout the whole song, something which I found quickly made me bored with the song.

The Pistol Annies have played a small amount of headlining concerts and performed alongside Miranda Lambert's own tour in the US and I would definitely be interested to hear them in the UK. Their songs are not the typical modern country that is heard from artists such as Lady Antebellum and Taylor Swift but I do feel they have found the right music for them and I like a lot of their songs. Four stars for the band from me.
Email Post