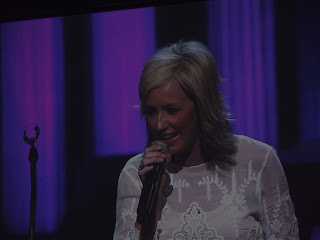 Kristen Kelly is an American country singer originally from Lorena, Texas. Recently, she is probably most well known for being part of Brad Paisley's Virtual Reality World Tour but she has also played many shows by herself and opening for other artists, including many Grand Ole Opry appearances. I was able to see Kristen at the Opry whilst I was in Nashville and she is a very talented singer.


Kristen's first single Ex-Old Man was released earlier this year. It is a very strong, gutsy song that really suits Kristen's voice. Throughout the video Kristen reminds me a lot of Martina McBride and Ex-Old Man has fast become a favourite of mine. She has made no secret of the fact it is an autobiographical song and is a brave subject for a debut song. It is a very catchy song that just makes you want to tap your feet and sing along.
Kristen's debut self-titled EP was released today and is a very competent collection of four songs. Ex-Old Man is the lead track and it is joined by He Loves To Make Me Cry, Drink Myself Out Of Love and Miss Me. All of the songs have certain things about them that keep listeners enthralled and I have found myself wanting to play the EP on repeat multiple times. Miss Me is a really good song and is perhaps my new favourite. Kristen has said Miss Me is an autobiographical song as well as Ex-Old Man. Both songs are similar but Miss Me has more of a Southern, bluesy sound to it. It is opened with an electric guitar hook that reappears occasionally throughout the song.

He Loves To Make Me Cry follows the Southern, bluesy sound with Kristen singing an acapella opening. The guitar and drums accompany Kristen's vocals well and offer a consistent beat throughout. Singing "he loves to make me cry" acapella at various points really draws the listeners attention to Kristen's strong vocals. The song as a whole is refreshingly different and harkens back to old blues and jazz songs.

In contrast, Drink Myself Out Of Love is a much more upbeat song that makes you want to tap your feet along. The song as a whole has a great part atmosphere and whilst the instrumentalisation is still relatively simple I don't find myself thinking it needs anymore at any point. I'm excited to see what other songs Kristen releases as she becomes increasingly popular. I would definitely recommend listening to the EP in an environment when you can absorb the lyrics as I feel all four of the songs tell really good stories. I hope to be able to see Kristen live in the UK very soon but for anyone who gets a chance to see her live it is definitely worth it! Five stars from me!﻿
Email Post