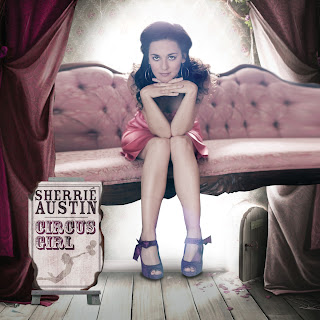 Sherrie Austin is a Australian country singer originally from Sydney who now lives in Nashville, Tennessee. During her career she has been a actress as well as both writing and singing songs. She has had roles in both The Facts Of Life and The Fresh Prince Of Bel Air as well as singing as part of duo Colourhaus before moving to Nashville to pursue her solo singing. She also spent around a year in New Year with parts in various Broadway plays.

Her songwriting skills have produced some very successful tracks, such as Tim McGraw and Faith Hill's duet Shotgun Rider, Blake Shelton's Startin' Fires and George Strait's Where Have I Been All My Life as well as her own One Solitary Tear and Lucky In Love.

Her latest album, Circus Girl, is the first album she has released in eight years and is the album that properly introduced me to her music. It is a really strong album throughout with the title track being one of my favourites. I was lucky enough to be able to see Sherrie sing various songs - including Circus Girl - at the Bluebird Cafe and she is definitely as good live as she is on the album. The song starts simply and then builds up as more instruments are added however the instrumentalisation is very clever in that the song doesn't sound over-produced at any moment.

The album is a very well produced mix of songs. He's All Yours is a very good showcase of Sherrie's powerful vocals. It starts off fairly soft but then builds up with a drum beat and strong guitar. Her new album has been described as 'a series of stories interpreted by a strong woman, about women, and for women' which I think sums up the album very well.

One of the softer and more emotional songs from album, Streets Of Heaven definitely deserves multiple listens. The instrumentalisation is a lot simpler than in some of her other songs and the message behind the lyrics is a lovely, heartfelt tale. With lyrics like "she wants to marry her daddy when she's all grown up" I find it hard to listen to this song without feeling emotional. Another strong song is That Kind Of Happy. The song is completely different to Streets Of Heaven in that is a lot more upbeat and with strong, gutsy lyrics. The low drum beat during a lot of the song also helps to keep it moving along swiftly.

Having seen Sherrie whilst I was in Nashville I can definitely recommend going to any of Sherrie's live dates. I hope to see her in the UK soon, something that she has said she would love to do. Definitely five stars for a really good album and a very talented singer-songwriter.
Email Post