Country music duo Thompson Square comprises Shawna and Keifer Thompson, originally from Alabama and Oklahoma respectively. They formed a duo shortly after they met at a singing competition in Nashville, Tennessee. They signed to Stoney Creek Records in January 2010 and released their debut self titled album on 8th February 2011 after releasing tracks Let's Fight and Are You Gonna Kiss Me Or Not? as singles. The album's release was followed by the next two singles, I Got You and Glass.

Perhaps my favourite song of theirs is Getaway Car. It is a really strong song that shows off both Shawna and Keifer's vocals well. Both also showcase their range well, with the opening starting on a lower pitch and then getting higher into the chorus. There is a good pace behind the song, kept going by the strong drum beat and electric guitar hook. 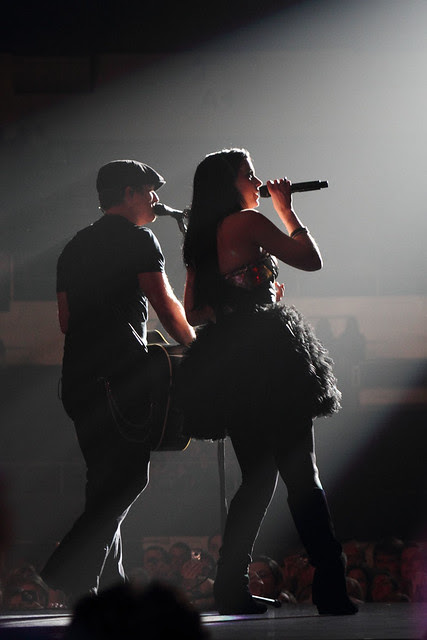 Another very strong song from the album is the duo's latest single Glass. It is one of the softer songs of the collection and features Shawna singing lead. Towards the end of the song, the production strips back for part of the chorus which is really effective in emphasising the message behind the song and is definitely a goose bump moment. I would say it is very important to listen to the lyrics throughout, there is a wonderful story behind the song and I'm surprised that it hasn't charted any higher for the duo (it charted at 15 on the Hot Country Songs chart)

The song that has been accredited with a lot of Thompson Square's success, Are You Gonna Kiss Me Or Not? adds to the album. As with Glass, I would definitely say it's very important to listen to the lyrics as the story progresses throughout the song. Keifer takes the lead vocals on this song with Shawna joining in on the chorus. The song develops from first love to marriage and is very story based. The instrumentalisation is very clever in that it doesn't overshadow the vocals but still rises and falls when it needs to in order to add dynamics to the song.

Whilst it is a hard decision to make, my least favourite song is One Of Those Days. I feel it is too over-produced, particularly in the chorus and that the duo suits songs with less of a production as they are both strong enough vocalists that neither needs to hide behind the instrumentalisation.

Thompson Square also recently caused an upset by winning the CMA award for Vocal Duo Of The Year, ending a five year run by Sugarland. You could tell both Shawna and Keifer were emotional about the award and that it meant a lot to them.


The duo recently said in a live web chat that they would love to come to the UK and I really hope that they do soon. They are a very strong duo and I'm sure they will continue to release good albums as well as challenging for many awards.
Email Post