Tim McGraw is an American country singer and actor. Throughout his career he has released thirteen albums, eleven of which have consecutively debuted at number one on the Billboard album chart. He has also won 3 Grammys, 14 Academy Of Country Music Awards, 11 Country Music Association Awards, 10 American Music Awards and 3 People's Choice Awards.

Two Lanes Of Freedom is his latest album, released on 5th February. It is also his first release for Big Machine Records after leaving Curb Records. When asked to comment on the album Tim has said


"I feel like I've progressed in my work, and I've always strived to get better. On my last album, I was discovering some new sounds and new things that I wanted to do, scratching the surface of the direction I wanted to head. This album was a way to reach a little further back, to all that I'd done throughout my career, and bring both sides together.”

My favourite track from the album has to be the second single One Of Those Nights. The track as a whole has a relaxed yet rocky feel and really suits Tim's voice. I have been playing it on repeat for a while and haven't grown tired of it, something that in my opinion shows a great song.

In contrast to the rocky feel of One Of Those Nights, I also really like Book Of John. The song as a whole is very lyric based and the stripped back instrumentalisation really works well with the track and adds another dimension to an album that includes songs such as Truck Yeah.

An interesting collaboration on the album is Highway Don't Care, featuring vocals from Taylor Swift and guitar from Keith Urban. Whilst I am not a huge fan of Taylor I actually quite like her on this track and Keith is a brilliant guitar player. Tim has described the collaboration as


"When I heard the song, I knew I wanted Taylor to sing on it, and I've been looking for years for something to have Keith play on, because I think he's one of the best artists we have out there. He's a fantastic guitar player and he went to town on this thing—I would do this for a hundred bucks a night and never sing another lick if I could play guitar like that." 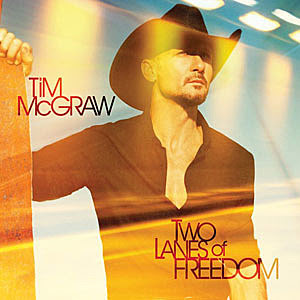 Whilst it is very hard to decide, I think my least favourite song is probably Truck Yeah. Whilst having a rocky song like this adds to the versatility of the album, I don't think it really needs it when some of the other songs such as Tainted Windows and Nashville Without You are so strong and then there are One Of Those Nights and Two Lanes Of Freedom that still have a rocky feel without going overboard.

It was announced a few months ago that Tim will headline the first night of C2C : Country To Country Festival over here in the UK. I am really excited about this, especially as Vince Gill, Little Big Town and Kristian Bush will also be joining him.


Track listing....
1. Two Lanes of Freedom
2. One Of Those Nights
3. Friend Of A Friend
4. Southern Girl
5. Truck Yeah
6. Nashville Without You
7. Book of John
9. Mexicoma
10. Number 37405
11. It’s Your World
13. Highway Don’t Care (featuring Taylor Swift and Keith Urban)
Deluxe version includes....
8.Annie I Owe You A Dance
12.Tinted Windows
15.Let Me Love It Out Of You
14.Truck Yeah LIVE
All in all I'd definitely recommend buying this album. Tim McGraw has a different voice to many of the male country artists out there at the moment such as Eric Church and Kip Moore but he definitely knows what suits him and has created a very strong album.
Email Post