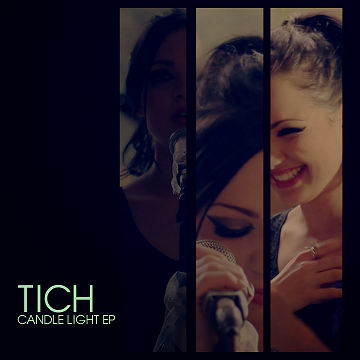 People who have been reading my blog for a while may have read my first ever post on English artist Rachel Furner. I wanted to go and re-visit her and her music and see what has happened for her the past two years. She now goes by the name 'Tich' and has also just released her debut EP Candlelight.

Candlelight features four tracks, Breathe In Breathe Out, Dust, Kingdom and Little By Little. My favourite track from the EP is Kingdom. It starts off really nicely with just vocals and guitar picking and then builds up nicely with the guitar picking hook then being repeated by a string section. Tich's vocals are very strong and the instrumentalisation builds and fades throughout the song, all without overpowering her vocals.

I also really like Breathe In Breathe Out. The track starts with an almost medieval feeling string hook and similarly to Kingdom, builds and fades throughout. Tich is very good at conveying emotion in her songs and manages to make every song sincere.

Critics could say a lot of Tich's songs sound similar which ultimately they do but I think the story behind the lyrics and the production of each song is different enough to mean that listeners stay interested throughout the EP and keep repeating tracks. She is said to be working towards her debut album release and is also set to release a single Dumb on 28th April.

You can find Tich on Facebook and Twitter and she is always very good at replying to messages from her fans. Tich is currently opening Olly Murr's UK tour after having opened for many artists during the past two years. I would like to see her do her own striped back tour at some point, I think her songs would really suit smaller, more intimate venues.

I also wanted to just take a moment to thank everyone for their support over the past two years. Both my readers and the artists are very appreciated. I have some really interesting artists planned to feature so I hope you'll keep reading my posts! ﻿
Email Post