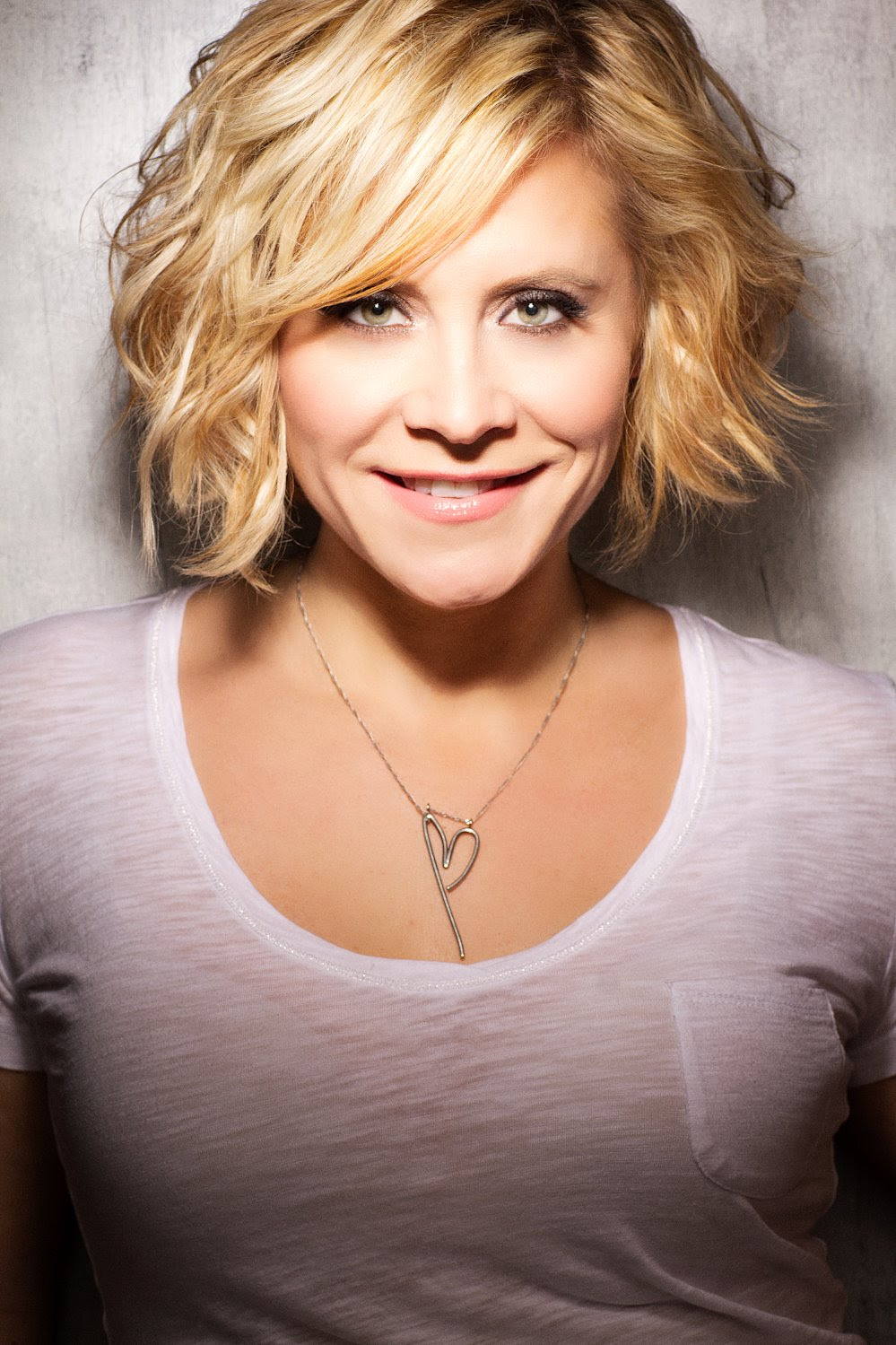 North Dakota born country singer-songwriter Gwen Sebastian is starting to build quite a strong and dedicated fan base for herself. She has previously released two albums, 2008's Invitation and 2009's Push Play and is due to release her third, self-titled album on 25th June. Gwen appeared on season two of The Voice US alongside coach Blake Shelton and has seen her fan base greatly increase since then. This is the first album she's released since appearing on the show and is definitely a must buy.  It features fifteen well produced and well written tracks, including my two favourites God Bless and One Like That and in my opinion is one of the strongest album releases so far this year.

God Bless is one of the only tracks on the album not in any way written by Gwen but she delivers an emotional, heartfelt performance that had me in tears when I first heard it. I do also think the half a minute of silence at the end of the track is very effective. The simple instrumentalisation works really well as well as keeping the focus on the vocals.

One Like That is a similarly heartfelt song but is about the love between her parents. I also thought it was a nice touch that Gwen's parents sing backing vocals on the track. The instrumentalisation behind the track works well and gives it a catchy feel that makes the listener want to both sing along and play the song on repeat. The lyrics tell a lovely story and I would definitely recommend listening closely.

Gwen also showcases a rockier side to her voice in the album, particular in tracks such as Somebody's Gonna Love Me and I Ain't The Middle Of The Road. In keeping with the rest of the album Gwen delivers a heartfelt performance but she also seems as much at home in the slower songs as she is in the rockier, more upbeat songs. Lead single Suitcase is also one of the rockier tracks and is a great introduction to Gwen's music if you haven't heard anything from her before.

My only negative from the album is that I don't particular like Annie's New Gun. The idea behind the song is an upbeat, tongue-in-cheek break-up song but I find the instrumentalisation to be a little too overpowering and busy, something that Gwen doesn't need at all and contrasts greatly with songs such as February's Fool and When I'm Gone, both of which have a much more stripped back instrumentalisation.

I was recently able to catch up with Gwen and ask her some questions.

You wrote the majority of your album, is songwriting something that comes easily to you?

I wish I could say that it does. The reason I moved to Nashville was to become part of the Nashville songwriting community because I love country music and I wrote my first song when I was eighteen and it was for my graduation. So I didn't get into in really early on but it just depends for me, as far as the writing aspect goes I enjoy writing by myself but I also do co-writing. When I do it by myself it's generally I'll get an idea, I'll get the idea and the hook and the melody all kind of at the same time and where I'm co-writing with somebody else they may have the idea and then we'll come up with....I might have the melody and then somebody else in the room might have another idea. But yeah it's something that I love doing and I don't always get to do a lot of it when I'm out on the road so I try to take advantage of it when I'm back in Nashville.

What would you say your favourite song you've written is?


Favourite song that I've written is...I love..."Suitcase" is one of them and I think on the album "When I'm Gone" just for the fact that the inspiration came from a very personal point of view that was from basically when I was back home looking around at all this beautiful land that my dad had farmed and just knowing that it's going to stay in the family was a really good feeling but there's a lot of people that are thinking what kind of legacy am I going to leave and what am I going to pass down and that's kind of where that song came from was inspired by that and then we all feel that way I think even as younger people I think probably have that side but a lot of times mothers do and of course it goes into our soldiers and who's going to take my place when I'm gone so that came from a kind of a real heartfelt spot and it just means something to me so that's probably that's my favourite.

How do you pick the songs that you don't write?


First of all I try to listen to every song that's ever pitched to me, no matter what I'm going to listen to it no matter who it comes from and for me picking a song that I haven't written I need to feel it and I need to be able to sing it like I did write it, like it comes from me myself, so it's important to do that because I think that in the long run you want people to feel the song and I have to feel it before they can so that's generally what I look for. Not necessarily content, it just has to do with does it move me, does it make me laugh, does it make me sad, what's it going to do when I sing it, can I move people.

Which song is your favourite that you haven't written?


I love "God Bless". To me that was just so clever in the way it was written, I heard the songwriter Lisa Carver sing it at her CD release and the entire room was silent through that whole song. It was a couple of years ago that I heard it but I just definitely wanted to cut that if I ever had the chance and so I'm glad I did.

Who would you like to collaborate with and why?


You know there is a lot of people that I would love to, as you've heard on the album Miranda Lambert took her time out of her crazy schedule to come and sing on the album and that meant a lot to me, she was somebody that I've always wanted to do that with so that's a dream come true right there and she sang on "I'm Not Who You Think I Am" which was the song about the whiskey talking and kind of a darker place and then a fun "Annie's New Gun" which I thought was so cool to have one of the Pistol Annies on that song so that was really cool and amazing for her to take her time out to do that but I love Don Hanley [lead singer for the Eagles], that would be a big one for me right there.


Which song do I wish I had written...."He Stopped Loving Her Today" just in general, yeah that would be one of them. "Heart Of The Matter" I love that, gosh, "Across The Universe" there's quite a few, there's lots [laughs] I'm in love with songwriters and I don't know if, do you know who Kacey Musgraves is? I'm sure you do. I love "Merry Go 'Round" I think that's one of the best written songs in a long time so that's a good one too.

You kind of mentioned before, you worked with Blake and Miranda on The Voice and after that, how was the experience?


It was awesome, on The Voice itself we didn't get to interact with the coaches and mentors that much, pretty much what you saw on the show is what you get kind of thing but then now just being on tour with Blake and meeting up with Miranda and things like that, she's one of the coolest people in the business and I've already said this to you that if I didn't cross paths with them in the music industry and if they weren't singers and if I wasn't a singer, I have a feeling we'd be friends anyway, they're cool people, they're down to earth and they've done a lot for me, they really have, they're just good people.

What's your favourite part of being a musician?


Just being able to do what I love to do and interacting with people, I love the fans, I love meeting them and just seeing the reaction on their faces.


Being away from family and friends.

What advice would you give to anyone wanting to be a musician?

What was it that made you decide you wanted to be a musician?


I knew when I was really little, my parents are musicians so I grew up with it and I didn't necessarily know I was going to do it full-time or have it as a job per say but when I was really little like even five years old I was already doing shows in front of my stuffed animals and every cousin that I could get to watch [laughs] When I was in high school I had the itch to really move to Nashville for that reason. I did go to nursing school because I thought I needed a little back up plan but I ended up quiting collage and nursing and going to Nashville, so I knew pretty early on.

Any plans to see you in England soon?


I am so wanting to come over there! I have not been ever and yes, I will be coming, I don't know exactly when but hopefully, we're thinking maybe even 2014 to come on over and do some shows.

Brilliant, there's a lot more support for country music over here now than there has been.


Yes, I can see that, it's been embraced more and things like that and especially like I said Louis [Newman, her fiance] is from there, just to be able to come on over and see where he's from and then incorporate what we love to do, music, would be a nice little trip.

Gwen was such a lovely person to get to chat to and I would definitely recommend purchasing her impressive new album once it is released on 25th June. It will be available digitally and as a hard copy in America and digitally internationally. Recommended tracks are Somebody's Gonna Love Me, I Ain't The Middle Of The Road, God Bless and One Like That.