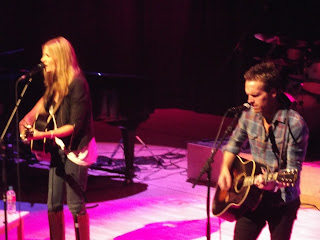 Regular blog readers will have seen my reviews of Holly Williams' last two albums Here With Me and The Highway. I am a big fan of Holly's so it was great to be able to see her live last night at the Town Hall in Birmingham. Unfortunately Holly is mainly over in the UK as the support act for Ron Sexsmith's UK tour but she is playing one headlining date at the Borderline in London on 23rd June.

Whilst being a support act meant that Holly played a limited set it still gave her enough chance to showcase her vocals and musicianship. Coming onto stage with only her husband Chris Coleman as support set the tone for a stripped back acoustic set which really suited both Holly and the venue. Her vocals were amazing live - definitely as good as any recording - and goes to show that you don't need flashing lights and dancers to have a great performance.

All of the songs she sang were from her new album The Highway and the whole album was either written or co-written by Holly, something that shows her songwriting skill. My favourite songs from the album are The Highway and Without You so it was great to see those included within the set. There were also a lot of times throughout that Holly seemed completely enthralled in the instrumental parts of songs and made the audience feel like she was completely comfortable and at home up on the stage. 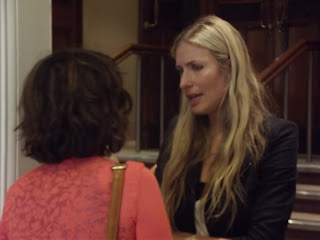 She held the attention of the audience well and after her set had a lot of people buying CDs and other merchandise, which she also signed. I was also able to catch up with Holly after her set and she kindly answered some questions.

Do you feel it's a help or a hindrance being related to someone so well known throughout the genre?


You know I think for me it's really not too much of either because it's so different, like my dad's music and my grandfather's music is so different from what I'm doing, I'm the female singer-songwriter who likes to play piano, my dad's a rowdy country singer, Hank Senior's obviously the biggest legend, so if anything in the beginning I'll always tell people it may make people's ears perk up and someone go 'I'd like to see her what's that all about' but it's not going to make them a life long fan, it's not going to make people spend money on tickets and merchandise. So it's something I'm very proud of and honoured by but career wise it doesn't change it that much. I mean you do deal with some prejudice of people assuming I'm going to be like this rowdy country singer with a cowboy hat and I have to prove myself to them but that's really the only thing where it gets awkward.

Do you draw your songwriting inspiration from your personal experiences?


Definitely, every single song is completely personal for the most part. There are some where I put myself in other people's shoes - 'Railroads' on this album, 'Drinkin'', even 'Waiting On June' my grandfather - but it's either something I have gone through or someone very close to me.

What was your first guitar?


My first guitar was a black Gibson and it had these little stars all over it and I was broke and needed to sell it and sold it to a friend of mine and I'm so upset about it now because I would do anything to have it back, I wrote all my songs on it.

How did you get the guitar in the first place?


My dad gave it to me actually, I think I was eighteen.


Oh my gosh tons of them, today I'll say 'Hold On' by Tom Waits. It's such a brilliant lyric, he's so good at storytelling and making the listener feel like they're in a film and in a movie the whole time so I think it's one of the best written songs there is.

Which artist would you like to collaborate with that you haven't already?

What would you like to achieve in your career that you haven't yet?


You know for me it's all about just being able to sell out theatres all over the world one day and building a really strong fan base. I mean I've been building that for years but it was never about a hit single or a million records to me, that's great and fine if it comes along but it's all about finding people who love me for all of my stories and all of my songs not just one focused thing and who really follow each album with what I'm going through so just continuing to develop and one day get to collaborate with Neil Young [laughs] on stage, at the Royal Albert Hall, I want to sell that out.

You've touched upon it but are there any venues you'd really like to play?


Yes, the Royal Albert Hall is the dream.

Do you get nervous before a show?


I really don't. If it's a local show in my home town where all my family and friends are there I get very very nervous. I sang at my best friend's wedding last year, I was more nervous than I've ever been but if it's strangers I don't get too nervous before a show, but home town or people I know make me nervous.

How do you deal with that?


I just pray and try not to cry [laughs] not much else, drink some wine.

What's your favourite part about being a musician?


My favourite part is honestly the performing, just telling story songs and getting to meet fans at the end of the night and getting to experience so many different cultures and groups, travelling all over even though I'm exhausted most of the time you also get to really live life and you get to really have the good and the bad and everything along with it.

How do you find audiences here compared to in America?


They're great, here it's much more of a listening audience which some people are scared and think 'oh they weren't in to it, they were so quiet' but that just means they're really paying attention and listening so I think that they seem to really follow people for years and years and just have a lot of passion for songwriting where what I do in America is really kind of left of centre but here it seems like y'all have a lot of songwriter fans.

What advice would you give to someone wanting to be a musician?


I would say that you just have to play and play and play and write and write and It's not all about looking for other people and looking for a record label or a manager or someone with connections. I didn't have any of that for years and I just played afternoon rubbish gigs where they may have been five people but you just have to get your name out there and keep writing and if it's not, if you feel like you can breath and go on without it I wouldn't recommend it but if you're like 'for me to function I have to play music, it has to come out of me' then people latch on to that passion and commitment and follow you.

Which would you say your favourite of your albums is?


The new one for sure. I think any artist would ever say that because you feel like you've grown so much, I've grown so much in the last four years, the songwriting is where I am now so probably every time that you asked me I would say 'oh the new one' I think that songwriting term getting to a place and I've really found my voice more as an artist and writer and everything.

How are you finding balancing H. Audrey with songwriting and touring?


It was hard a few years ago but now I've got my mum who does that accounting every day, I've got an amazing store manager who handles all the day to day stuff and the ins and outs of it so it's not at all what it used to be. I do the buying with him and Tori but she knows music is my first and foremost, she keeps it going and I check in and I'm there when I'm in Nashville. 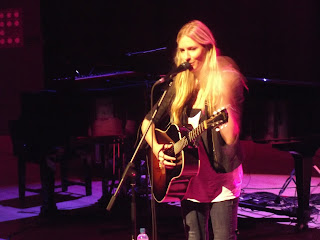 Holly is a very sweet, down-to-earth person and it was great to get to meet her. I would definitely recommend going to any tour dates you can - you can find the whole list here - and I am also sure that anyone already going to see her live will really enjoy it. Holly also mentioned that she will be back in the UK for a tour in the autumn, something that I'm very excited for!

Thanks to Malcolm Stone for the photos
Email Post