Cassadee Pope - 'Wasting All These Tears' 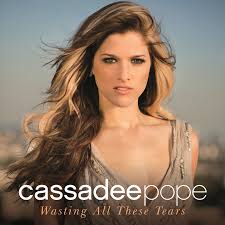 Cassadee Pope is a name that will already be known to many music fans. She was the lead vocalist in the band Hey Monday but she is now perhaps better known as being the winner of season three of The Voice US. Shortly after winning The Voice Cassadee signed with country music label Republic Nashville, something that doesn't link to her background but does link to her performances on The Voice - towards the end of the series she performed songs such as "Cry" by Faith Hill and most famously "Over You" by Miranda Lambert. She was also coached by Blake Shelton which gave her even more of a country influence.
She has recently released her first single on Republic Nashville entitled Wasting All These Tears - released on 4th June and just recently released on the UK iTunes store. The track sold 125,000 copies in it's first week of sales and it's highest current charting position is number seven on the Hot Country Songs chart. The music video for the track premiered on US channel CMT on 17th July. Directed by Brian Lazzaro, the video sets up a strong atmosphere and works well against the song.


Whilst Wasting All The Tears is certainly a country pop track it is a very strong one. Opened with a banjo and then Cassadee's surprisingly deep range the instrumentalisation is just right and even when the song progresses to the chorus it isn't overwhelming. The instrumentalisation works well against the mood of the song with a sombre restrained opening and then drums are added into the chorus which helps the more gutsy, slightly angry feel.

Throughout the track Cassadee delivers a heartfelt sincere performance helped by her impressive vocals and vocal range. It is written by Caitlyn Smith and Rollie Gaalswyk and with lines such as "finally I'm through wasting all these tears on you" and "you ain't worth another sleepless night" it conveys a message of moving on from a break-up although there are ideas of heartache in there with "my loneliness was rattling the windows" and "you left me standing on the corner crying".

With a background such as Cassadee's (with Hey Monday) don't expect the song to fall solidly into country. Whilst it certainly has country elements I would probably best describe it as country pop and suggest she is probably most like artists such as Carrie Underwood and loosely Miranda Lambert. It is however a very strong song and I would recommend downloading it even if you are a staunch country fan. Cassadee has also performed tracks Good Times, Easier To Lie, Break Your Heart, Champagne and You Hear A Song - all of which will join Wasting All These Tears on her upcoming album. Each of the songs is a lot more country than Wasting All These Tears, my favourite of which probably being You Hear A Song.


You Hear A Song is a lot softer than Wasting Your Tears even though there will most likely be more instrumentalisation on the studio version. The message behind the lyrics of the song is really nice and once again Cassadee delivers an assured performance. I also really hope this is released as the next single. Cassadee is a very strong vocalist and I hope she finds her way to tour the UK soon although she is currently on Rascal Flatt's current tour alongside The Band Perry. In my opinion she is definitely an artist to keep an eye on.
Email Post
Labels: Cassadee Pope "Wasting All These Tears"