The first two CMA awards were announced on Good Morning America earlier in the day with Highway Don't Care from Tim McGraw, Taylor Swift and Keith Urban receiving the awards for Musical Event and Music Video. The Musician Of The Year award was announced in the pre-show telecast and went to Mac McAnally.

Entertainer Of The Year and Male Vocalist Of The Year nominee Luke Bryan opened the show with a performance of his hit That's My Kind Of Night. Multiple nominated Florida Georgia Line joined him for a short performance of their smash Cruise and then to duet with Luke on the rest of That's My Kind Of Night. This performance then gave way to the much anticipated "Paisleywood" pairing of hosts Brad Paisley and Carrie Underwood. With an opening monologue that picked at feuding and Obamacare mainly, the duo had the audience laughing throughout.

The first award of the main ceremony was presented by some of the stars of the show Duck Dynasty with Single Of The Year going to Cruise by Florida Georgia Line. It was the duo's first win in the category and paid homage to an amazingly successful song. The presentation of this award was then followed by three performances - Jason Aldean performing album title Night Train, Kacey Musgraves performing new single Follow Your Arrow and Lady Antebellum also performing their new single, Compass. 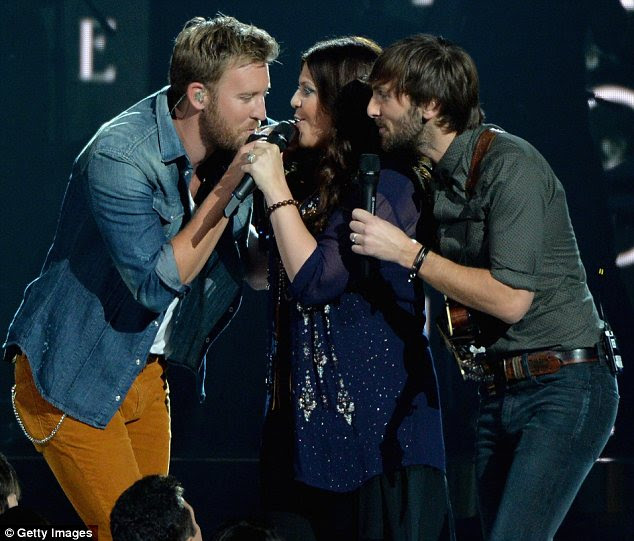 The categories moved on to the award for Song Of The Year. Presented by Jake Owen and Lucy Hale the award went to I Drive Your Truck written by Jimmy Yeary, Connie Harrington and Jessi Alexander and performed by Lee Brice. This is a gorgeous track with a really emotive message behind it so I was really happy to see this win. Regular blog readers and twitter followers will know I am a huge Little Big Town fan so I was naturally looking forward to their performance. They took the stage after the Song Of The Year presentation for an amazing performance of their new single Sober. Starting the song a cappella was a brilliant decision and highlighted the tight vocal harmonies the group create. This was definitely one of my favourite performances of the night.

Little Big Town's performance was followed by the award announcement for the Vocal Duo Of The Year category. This was always going to be a tough category in my opinion and whilst I had picked Thompson Square to win I wasn't surprised when Florida Georgia Line walked away with the award. This award was followed by another one of my favourite performances of the night, Keith Urban and Miranda Lambert singing We Were Us from Keith's newest album. It's an upbeat, summery feeling track and Keith's and Miranda's vocals work really well together. Following up from this Taylor Swift took the stage to perform her hit Red alongside Alison Krauss, Vince Gill and Sam Bush. Whilst I am admittedly not a huge fan of Taylor I would happily say this was a very strong performance - I would however have liked to have heard more of the brilliant Alison Krauss and Vince Gill.

Hunter Hayes and Jason Mraz then collaborated on Hunter's hit Everybody's Got Somebody But Me and then Hunter moved smoothly onto presenting the award for New Artist Of The Year (which went to the popular Kacey Musgraves). Eric Church then took the stage for a performance of his newest single The Outsiders. A lot of people had questioned the logic about performing an incredibly rocky track in front of a country music audience but the standing ovation at the end of his performance shows his true acceptance into country music in my opinion. Following that performance was The Band Perry with their new single Don't Let Me Be Lonely. This is one of my favourite tracks of theirs and the trio delivered a strong performance.

This then led to perhaps the toughest category of the night, Album Of The Year. There were so many amazing albums released this year that a lot of fans commented on certain artists missing when the nominations were first announced. I will say I was very surprised when Blake Shelton won for his album Based On A True Story... He seemed to be very much the underdog in the category up against Little Big Town, Carrie Underwood, Kacey Musgraves and Taylor Swift. As a Little Big Town fan I am of course disappointed that they didn't win but I can appreciate the strength of Blake's album and his credentials. Tim McGraw took the stage after this to perform perhaps my favourite song of his Southern Girl and the performances were then continued with Blake Shelton singing Mine Would Be You including backing vocals from the talented Gwen Sebastian.

Presented by Tim McGraw, Faith Hill, Brad Paisley, George Strait, Rascal Flatts and Keith Urban, the CMA Pinnacle Award was then awarded to Taylor Swift. I hadn't realised at first but Taylor has opened for all of the acts that were on the stage to present her with the award, something that I thought was a lovely touch from CMA. The show then led into a medley performance from Carrie Underwood of her most recent number one singles - Good Girl, Blown Away, Two Black Cadillacs and See You Again. It was an all-round strong performance from Carrie's impressive vocals.

Another tough category, Vocal Group Of The Year was up next and was presented by Kellie Pickler and P Diddy. As I mentioned before I am a huge Little Big Town fan so was absolutely thrilled when they retained the title that they had won for the first time last year. They have had a huge year and continue to go from strength to strength. Quite a few performances followed this category, including the two tributes of the night. Alan Jackson and George Strait continued the show with a very touching George Jones tribute singing a medley of some of his hits. The highly anticipated collaboration from Zac Brown Band and Foo Fighters drummer Dave Ghrol came next with the debut of a new song Day For The Dead. Certainly an impressive performance and one that in my mind further cemented the knowledge that the whole band are incredible musicians.

Brad Paisley then performed Mona Lisa from his current album and was followed by Rascal Flatts, Darius Rucker and Jennifer Nettles performing a tribute to Kenny Rogers - who was then awarded the Willie Nelson Lifetime Achievement Award. The night moved on to the presentation of the Female Vocalist Of The Year with Connie Britton and Charles Esten (from the show Nashville) presenting the award to an unexpecting Miranda Lambert. Whilst many fans and critics argued it should have been Carrie Underwood's year in my opinion it is always hard to pick between the two.

After a touching performance of Drink A Beer by Luke Bryan which he dedicated to his late brother and sister, it was the turn of Miranda's husband Blake Shelton to accept another award as Kelly Clarkson announced the award for Male Vocalist Of The Year. We then moved onto the final (and perhaps biggest) category of the night, Entertainer Of The Year. There were some huge names in this category and I was absolutely thrilled when George Strait was given the award. He seemed completely shocked and received a standing ovation from his peers as he went to accept his award, showing how well respected he is in the industry. He has said this tour will be his last and I thought it was a lovely thing for CMA to give him the award - and well deserved!


A brilliant night all round and once again proof that the CMA Awards is truely a great night. Congratulations to all the winners and here's to another amazing year in country music!