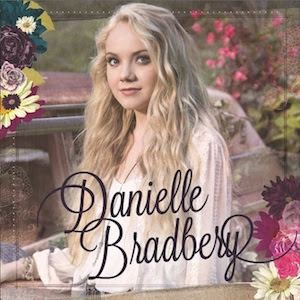 Country singer Danielle Bradbury is the newest winner of The Voice US and released her debut album on 25th November. Danielle signed to Big Machine Records (home to Taylor Swift and Rascal Flatts amongst others) the day after winning the fourth season of The Voice US on 18th June and released her debut single Heart Of Dixie to digital retailers on 16th July.
In my opinion Heart Of Dixie was a good choice as a debut single, it introduces new listeners to her voice and her brand of country with a good level of instrumentalisation and still keeping a focus on Danielle's vocals.
I have been a fan of Whitney Duncan for a while so I was intrigued to hear that the lead track on Danielle's album was to be the Whitney track Young In America (which is also my favourite of Whitney's) The instrumentalisation on Danielle's version is similar to Whitney's with more of a poppier feel from the fiddle and mandolin. I found I was very impressed by this version, Danielle has quite a powerful vocal and the punchy instrumentalisation gives the track a good energy, admittedly there is not much to differentiate it from Whitney's version but as a fan of the original I don't think it needs it.

Daughter Of A Workin' Man is one of the softer tracks on the album and it is really nice to see that the album is not just full of upbeat pop numbers. I have to credit both the songwriting and Danielle's story telling at this point, Nicolle Galyon, Dave Barnes and Clint Lagerberg have written great lyrics throughout, with lines such as "I'm a restless girl from a red-dirt town, like a tumbleweed I rolled right out" and "I'm the daughter of a workin' man, he built our world with his two hands, he gave us everything he had". The instrumentalisation is also at a good soft level, led by the acoustic guitar and fiddle. Daughter Of A Workin' Man is followed by another really strong track, Dance Hall. The opening staccato guitar playing sets a good pace without being over the top and gives the start a sense of anticipation. I can imagine Dance Hall being a great single at some point. Lines such as "we could string the stars over these corn stalks" and "we could turn your truck into an old jukebox" set a great picture and the track continues to build upon this.

Unfortunately there a couple of tracks on the album that I don't think work as well. I Will Never Forget You could be described as the big ballad on the album but I would have liked to have seen the instrumentalisation stay at the opening level, the chorus feels overpowering and it feels like Danielle has to push herself too much to be heard. Her softer voice in the verses is really strong so it's a shame. Similarly Yellin' From The Rooftop feels overproduced, especially because it follows softer tracks Daughter Of A Workin' Man and Dance Hall.

Overall I would say this is a very strong album from Danielle. There is certainly a pop influence on a lot of the tracks but I think that is to be expected and after listening to the album I am pleasantly surprised. I would like to see a few tracks with more of a stripped back instrumentalisation and I hope as Danielle releases more music that this will come. I would definitely recommend checking out the album and recommend Daughter Of A Workin' Man and Dance Hall overall.
Email Post