Kellie Pickler - 'The Woman I Am' 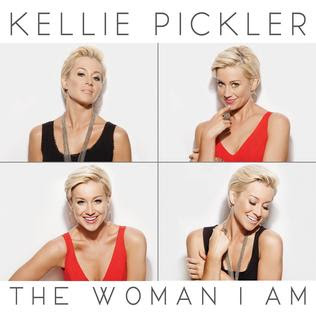 North Carolina native Kellie Pickler released her fourth studio album entitled The Woman I Am on November 11th last year. Kellie was a contestant on the fifth season of American Idol and has subsequently released Small Town Girl in 2006, Kellie Pickler in 2008, 100 Proof in 2012 and then The Woman I Am in 2013.

Lead single (and album closer) Someone Somewhere Tonight is in my opinion one of the real gems from the album. Kellie delivers an emotive performance and the waltz time signature adds a smoothness to the overall production. The instrumentalisation is also built up so that the electric guitar solo halfway through actually seems to be a logical progression rather than clashing with the softer start. The track has a great story behind it, with lines such as"someone somewhere tonight is taking their first steps, letting go of the hands that held them and trusting themselves" drawing listeners in.

Kellie partners with her husband Kyle Jacobs to write title track The Woman I Am. The acoustic guitar and soft drum accompaniment provides a good base for the vocals and other instrumentalisation to work over, with the occasional appearance from fiddle and electric guitar. In my opinion some of the strongest tracks in this album are the slower, more emotive numbers and this is one instance where you can feel Kellie's involvement in the autobiographical track in her vocal performance.

In contrast to the aforementioned tracks, Selma Drye has a faster pace from the start with the hand claps and acoustic guitar helping to push the track along. Co-written by Kellie this is another autobiographical track (this time about her great-grandmother) and Kellie says "she was very much old-school and I think that song represents the women of her generation" when describing the track. Selma Drye has become a favourite for many fans and critics alike and I will be interested to see if this becomes a future single from the album.

Whilst the overall production of the track made me smile, I found that Buzzin' has passed me by every time I've listened to the album. I think this is because a lot of the album seems very personal to Kellie - even with songs she hasn't written - and Buzzin' feels a little like a throw away addition, lacking the depth that some of the real gems on the album hold.

The bluesy feel to the opening verses of No Cure For Crazy works surprisingly well, however I find the instrumentalisation in the choruses too much. Kellie's vocals are still heard but in my opinion it feels like she is trying to compete against too much production. I would have liked to have heard the laid back blues production throughout the whole song rather than a far too short snippet.

Kellie already has quite a few US tour dates planned in (including a few in Australia) which you can access here and I certainly hope we get to see her in the UK soon! Although I have never seen her live I can imagine she delivers a strong, emotive performance.

Overall, I would definitely recommend listening to this album. Since first hearing Kellie's music I have often felt she is undervalued as a vocalist and I hope that this mature sounding album will start to change that. Recommended tracks are Ring For Sale, The Woman I Am, Closer To Nowhere, Selma Drye and Someone Somewhere Tonight. I'm excited to see how Kellie develops the sound she delivers throughout The Woman I Am!

Email Post
Labels: Kellie Pickler "The Woman I Am"