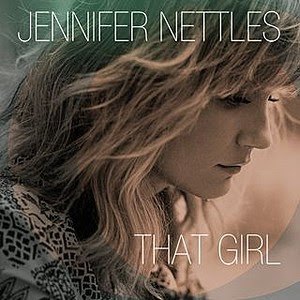 With her distinctive Southern drawl, country singer-songwriter Jennifer Nettles is perhaps better known as one half of the successful country duo Sugarland. The release of That Girl on 14th January marks her first solo release since the release of An Acoustic Evening With Jennifer Nettles II in 2004 and the album is currently number one on the Top Country Albums Billboard albums chart and number five on the Billboard 200 chart.
Fans searching for echos of Sugarland will find it in songs such as album opener Falling. In my opinion the acoustic start of the track is a real high point and the stripped back instrumentalisation immediately draws a listener in and makes you appreciate Jennifer's impressive vocals. The production is very well thought out throughout the track and at no point do you feel Jennifer is overpowered by the sound of the instruments. I do however find myself wanting the acoustic opening and close to the track to be longer.
The album title track was released as the lead single on 19th August last year. Cleverly marketed as the answer to Dolly Parton's Jolene, That Girl has a distinct blues feel and highlights Jennifer's impressive lower range. With lyrics such as "I don't wanna be that girl, with your guy" and "so I called you, to explain why, I wound up with your guy" the track tells an interesting story and the overall production is strong.

That Girl is then followed by, in my opinion, the best track on the album. This Angel is written by Jennifer and Mike Reid and is about the birth of her son. Whilst there are certainly a myriad of gems on the album, the emotion that Jennifer pours into this song compliments the simple instrumentalisation and makes it the stand out track. Lyrics such as "who is this angel, sent here to change me, sent here to take me where I've never been" and "the sweetest surrender is losing myself in all that you are" are delivered softly and warmly and I found the emotion of the track very powerful.


Also worth a mention is the reggae infused Moneyball. The syncopated drum beat keeps the beat going through the track and is the most noticeable instrument throughout with quieter, simple electric guitar riffs in accompaniment. Jennifer delves into a deeper tale in this song with lyrics such as "Facebook emoticon replaces the high five" and "we all earn our keep but can't keep what we earn" and I would say this is one of the songs on the album where the listener needs to pay close attention to the lyrics in order to get the full meaning - although the first few times I listened to it I found myself swept away with the overall instrumentalisation.

The next single from the album will be Me Without You - the track goes for adds at US country radio on 10th February. Another heartfelt performance from Jennifer travels through lines such as "well you left the cage door open and your pretty bird just flew" and "I never knew that I could fly so high and the sky could be this blue" to tell a story of moving on from a relationship, accompanied by acoustic guitar and soft horn and drum section.

With similar production, Thank You is another one of the softer tracks on the album. Written with Little Big Town's Phillip Sweet, the key of the instrumentalisation and the soft plucking of the guitar give the track a happy, sweet feel even without the high levels of production that some of the other tracks have and the sentiment behind the lyrics is lovely.

Whilst lyrically very clever, I found myself wanting to reign the production in throughout Know You Wanna Know. The track opens with almost frenetic piano playing and quick descending riff on the base guitar and that pace continues throughout, feeling a little overpowering.

In my opinion This One's For You lacks the sparkle that some of the other tracks on the album hold. Whilst still an 'okay' track, I found myself passing it by a few times, possibly due to the fact it is sandwiched between two upbeat tracks.

Listening to the album it feels very personal to Jennifer, perhaps highlighted by the fact she has had a hand in writing ten out of the eleven tracks. She has also not been afraid to travel between genres and you will find hints of blues, Americana, country, reggae, R&B and soul throughout. In my opinion Jennifer Nettles is one of the strongest female country vocalists at the moment and there is something for everyone on this album.

I did find myself having to listen to some of the tracks a few times before they really sunk in and I would suggest a few listens if you are not sure of certain tracks. For me, the real gems are the softer tracks where Jennifer's story telling skills and strong vocals can really come across but the up-tempo numbers are also strong. Fans of Sugarland should listen to Falling and Me Without You however overall recommended tracks are This Angel, Falling, Thank You and Moneyball.

Jennifer is set to go on tour soon across the US with Brandy Clark opening for her. Having been over to the UK a few times as part of Sugarland, I hope we will see her back here soon!
Email Post
Labels: Jennifer Nettles "That Girl"