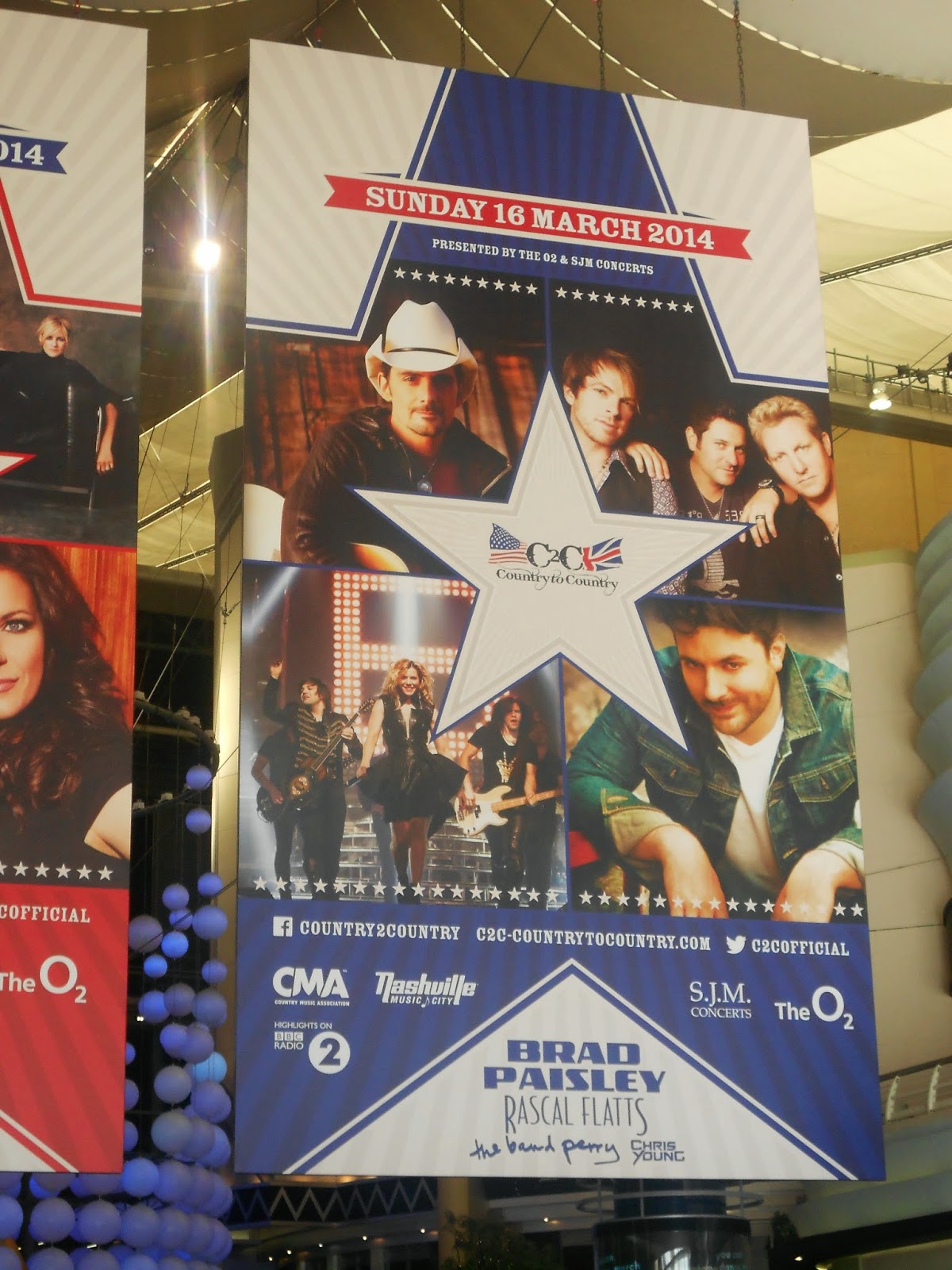 The Country to Country Festival continued with a line up of Chris Young, The Band Perry, Rascal Flatts and Brad Paisley on it's second (and final) day. The evening's show was again hosted by Radio 2's Bob Harris. 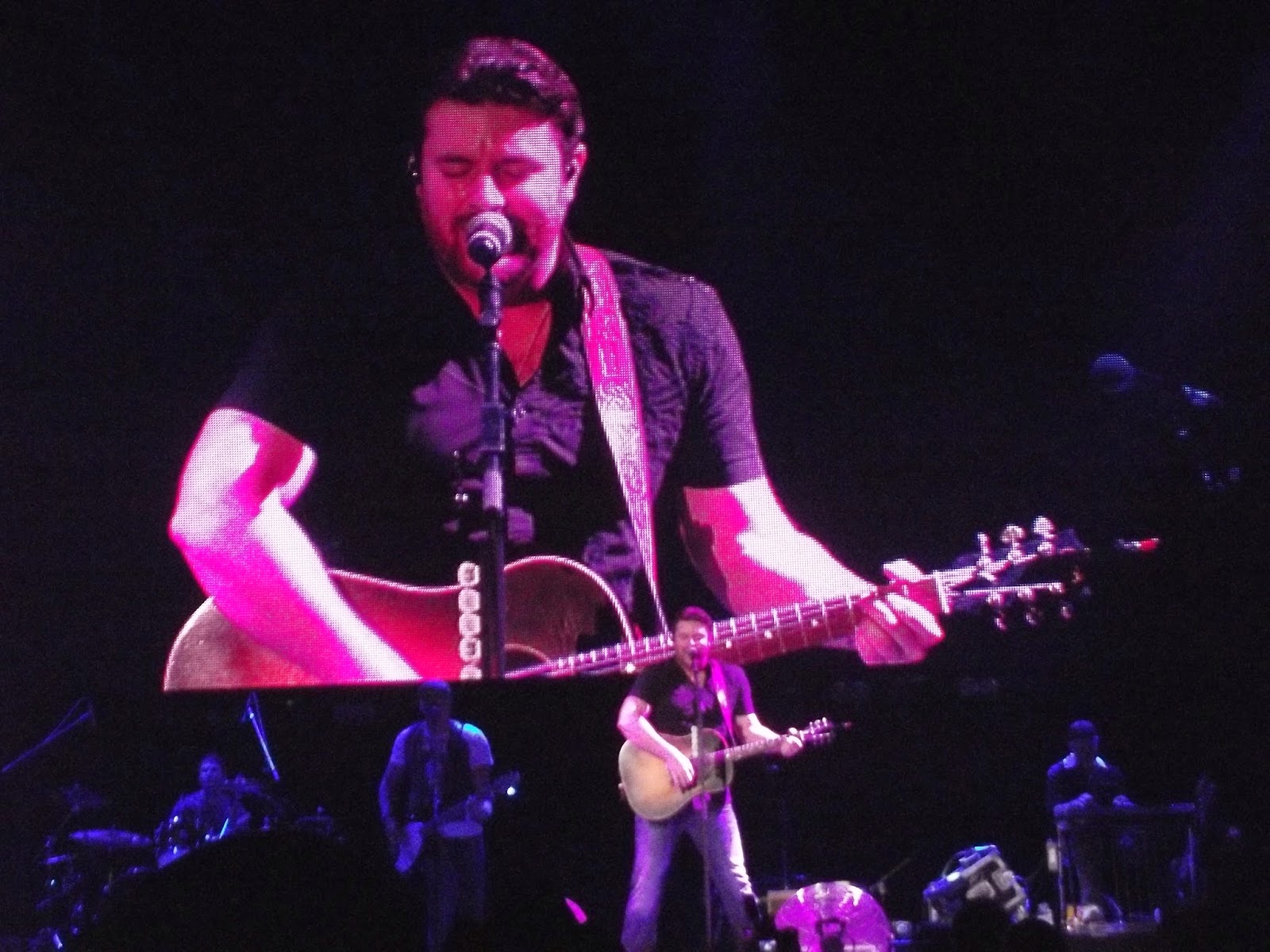 Due to the fact I was attending The Band Perry's press conference (keep an eye out for the write up) I missed the start of Chris Young's set. I hadn't listened to any of his music before hearing him live. He delivered a strong set but didn't wow me personally. I was happy to see he wasn't as rocky as I thought he'd be and the audience seemed to respond to him really well. Tomorrow and Who I Am With You were the two highlights of his set for me showing an emotive side to his rockier edged voice. 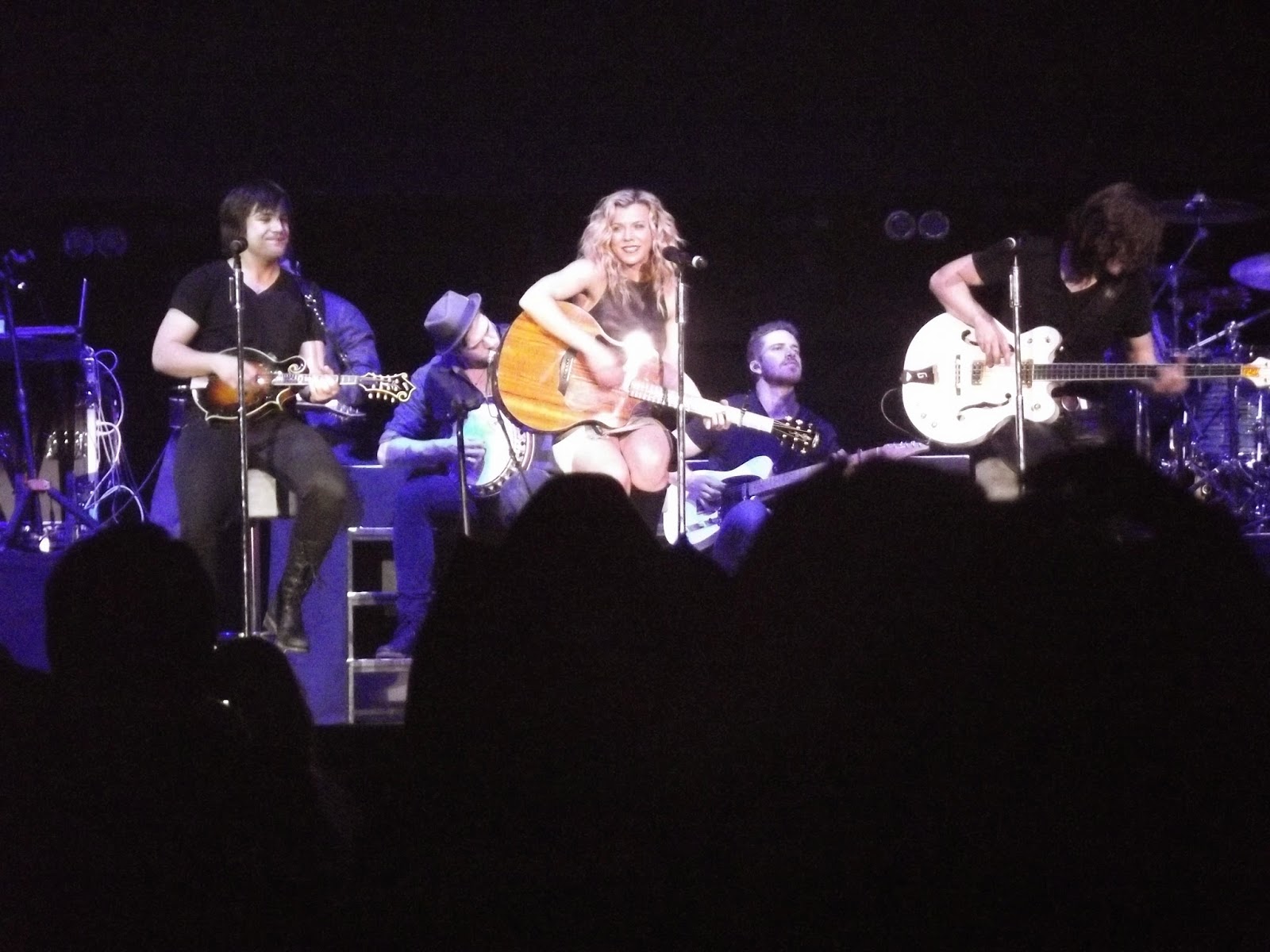 The Band Perry were then welcomed on to the stage. It has been almost three years since I last saw this trio live (I was at their very first UK gig) and it was great to get to see them again! They delivered a polished hour long set that showcased their rockier side but still included some of their slower songs such as All Your Life and their breakthrough hit If I Die Young. There is no doubt they had a set full of energy that steamed through tracks such as Chainsaw, You Lie and Forever Mine Nevermind. 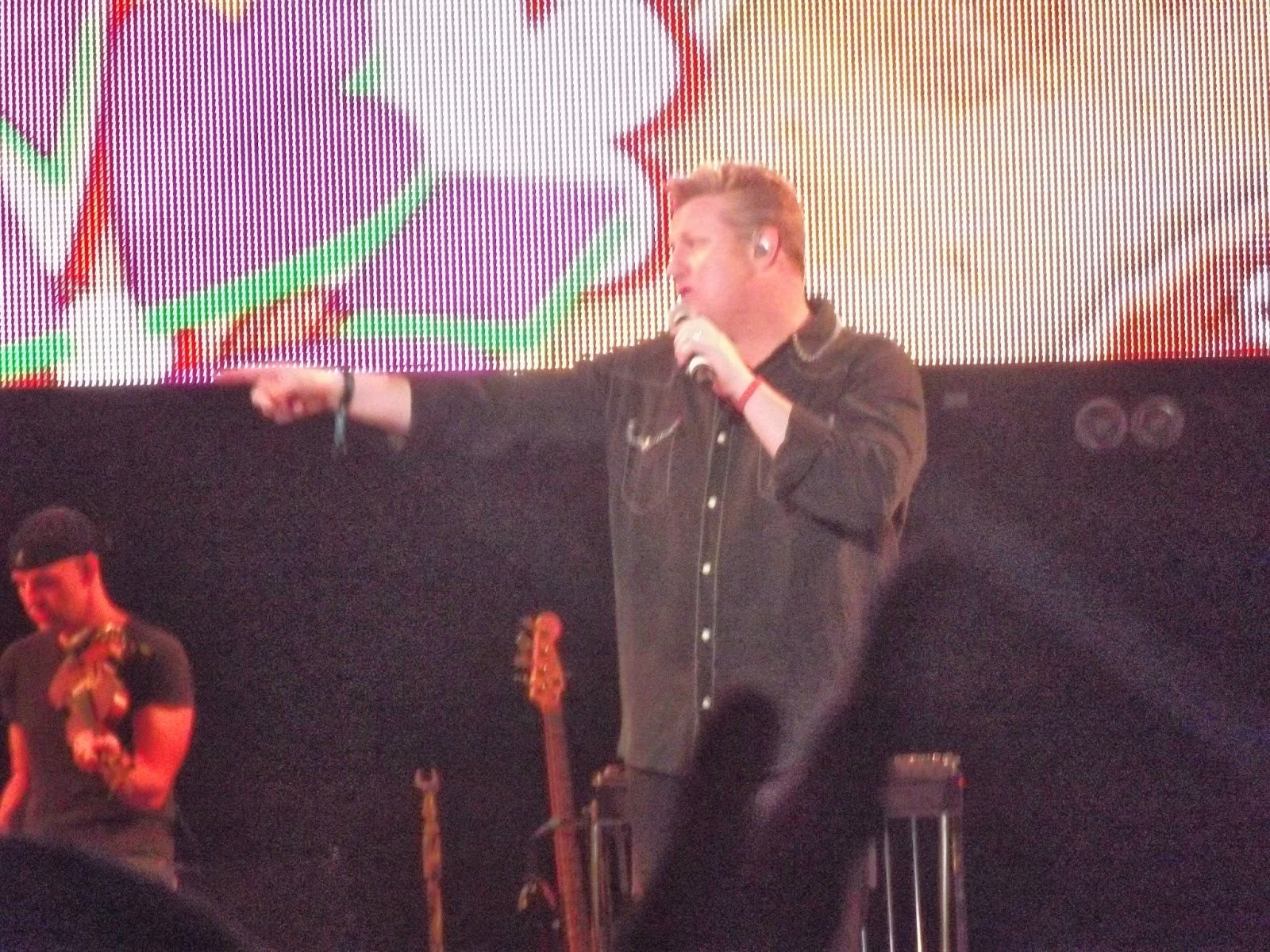 Rascal Flatts were the next act to take to the stage. I haven't listened to much of their music but I knew I would be in for a good show from them. They opened their hour fifteen set with Banjo and played a mix of tempos from a mix of albums. They also performed their newest single - from their upcoming album - Rewind as well as older songs such as Here's To You, Me And My Gang and What Hurt's The Most. It has been a few years since the trio released Bless The Broken Road but in my opinion it was one of the best tracks of their set. Whilst, as I mentioned, I didn't know some of their set list, I was impressed by Jay DeMarcus' and Joe Don Rooney's musicianship. Both are very skilled and the trio as a whole delivered a professional set. 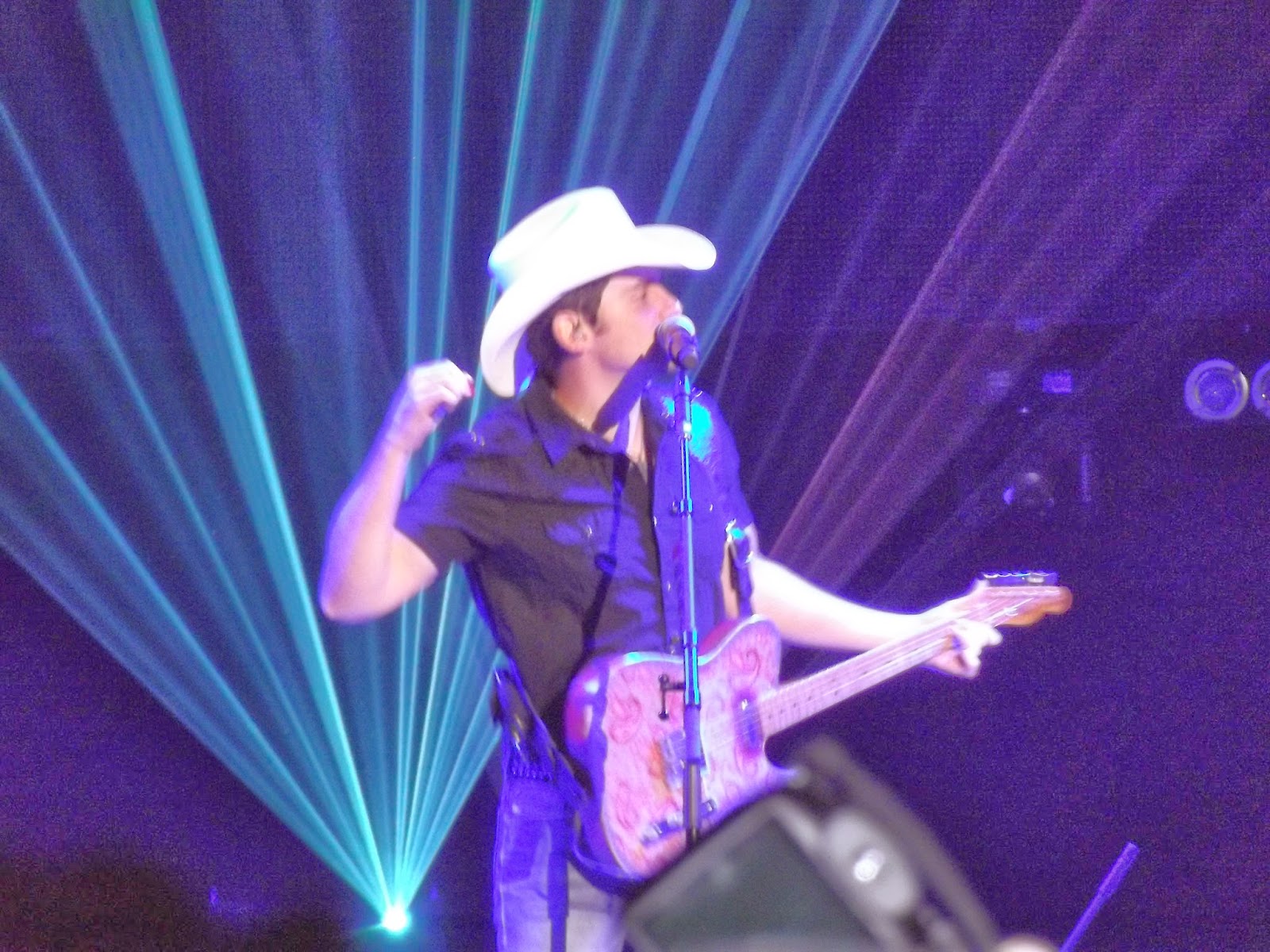 Sunday night's headlining act was Brad Paisley. I hadn't been able to see him live when he last toured the UK so it was great to get this opportunity to see him perform. He opened with what is definitely one of my favourite songs of his, Southern Comfort Zone. It was also his set that gave the audience what was in my opinion the real gem of the night (and possibly the weekend!). Brad first released Whiskey Lullaby as a duet with Alison Krauss and I had been hoping he would sing that for a very long time (whilst wondering who he would sing it with!) I was not disappointed as towards the end of the set he sang his opening solo verse and after hearing her vocals during the chorus, Kimberly Perry took the stage to sing Alison's part. I also thought it was really sweet that Neil and Reid Perry were also brought back on to the stage as part of Brad's band. It was certainly a truly lovely moment and was amazing to get to hear live. 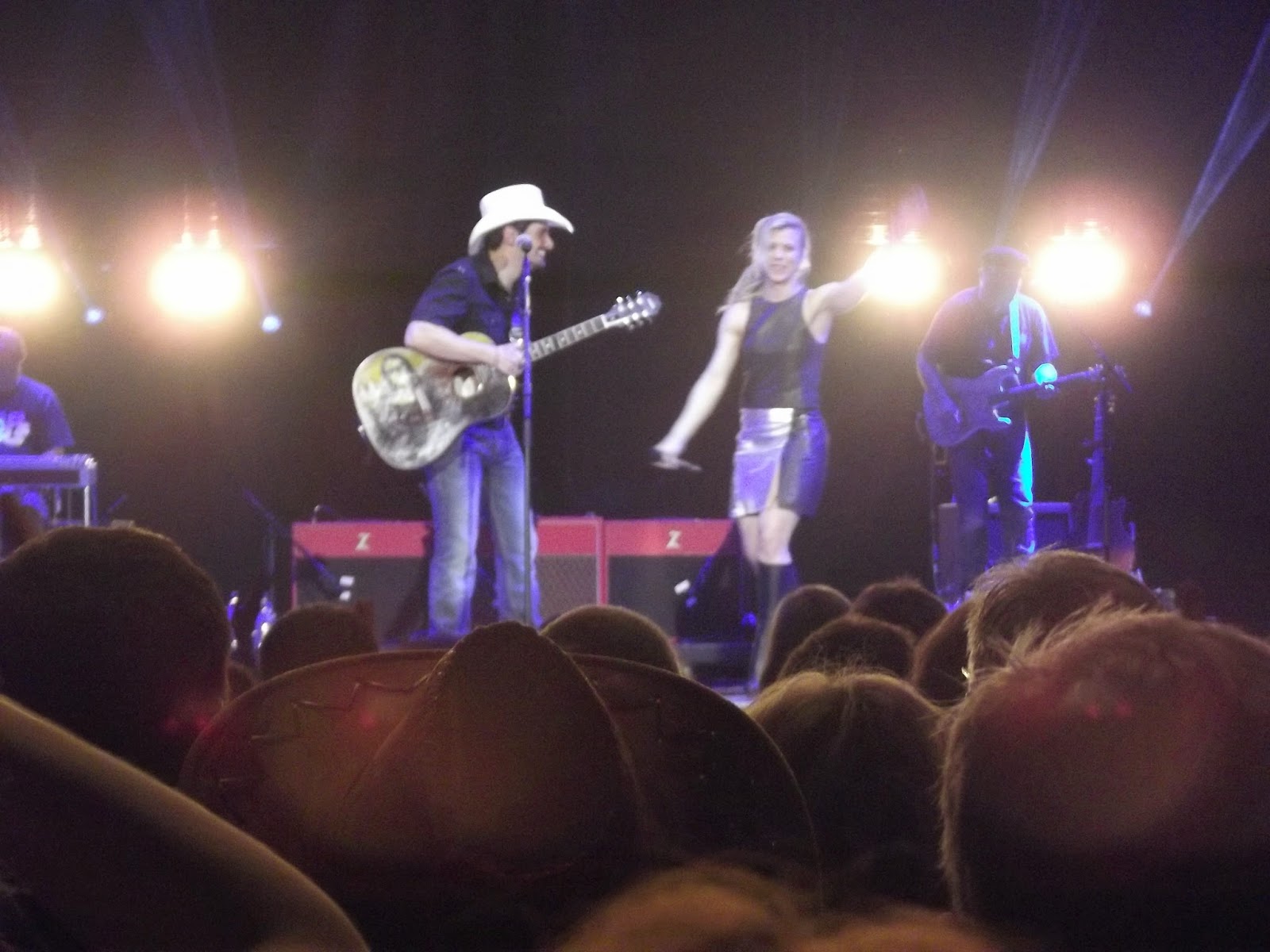 Similar to Zac Brown Band's Saturday set it certainly felt as if Brad brought his whole set to the O2 and his hour forty-five set gave him time to sing a multitude of songs and he also moved to the smaller set at the back of the floor to perform Online and I'm Still A Guy acoustically. Brad's This Is Country Music was accompanied by a great montage of pictures from some of the artists and songs he mentions and was ended with a big picture of country legend George Jones and a touching message that I thought was a really emotive inclusion. Current single The Mona Lisa was also included as the last track before his encore and Brad had the whole of the O2 singing along at points. He performed an extremely professional, tight set and is undoubtedly a very strong guitar player (as was showcased many times!)

As with Saturday's sets, there were also some covers included in these artist's sets. Chris Young covered Sharp Dressed Man from ZZ Top. The Band Perry sang Fat Bottomed Girls recorded by Queen (which seems to have become a solid part of their set list) and Timber from Pitbull feat. Kesha - which oddly worked. Rascal Flatts sang their previously released covers, Bless The Broken Road (from The Nitty Gritty Dirt Band) and Life Is A Highway (from Tom Cochrane). Brad Paisley's set included the Van Halen song Hot For Teacher.

Overall it was another great night and I would have to say The Band Perry and Brad Paisley tie as my favourite acts. The Band Perry felt comfortable on the huge stage and gave a really enthusiastic set that saw the family trio interacting well between themselves and the audience. It was also great to see some of their slower songs included in their set. Brad Paisley is without doubt a consummate entertainer who delivered a very impressive set. Whilst I didn't know all of his songs he more than made up for that and his interaction with the audience was brilliant. I only attended the first day last year and am certainly happy that I went to both days this time around. I would unfortunately say there were probably too many pop up stage artists this year, with many artists playing only one or two sets. I ended up missing many of the artists that I would liked to have seen. There were also many of the same stalls at the 'Town Square' as there were last year and I found that I had quickly travelled round them! 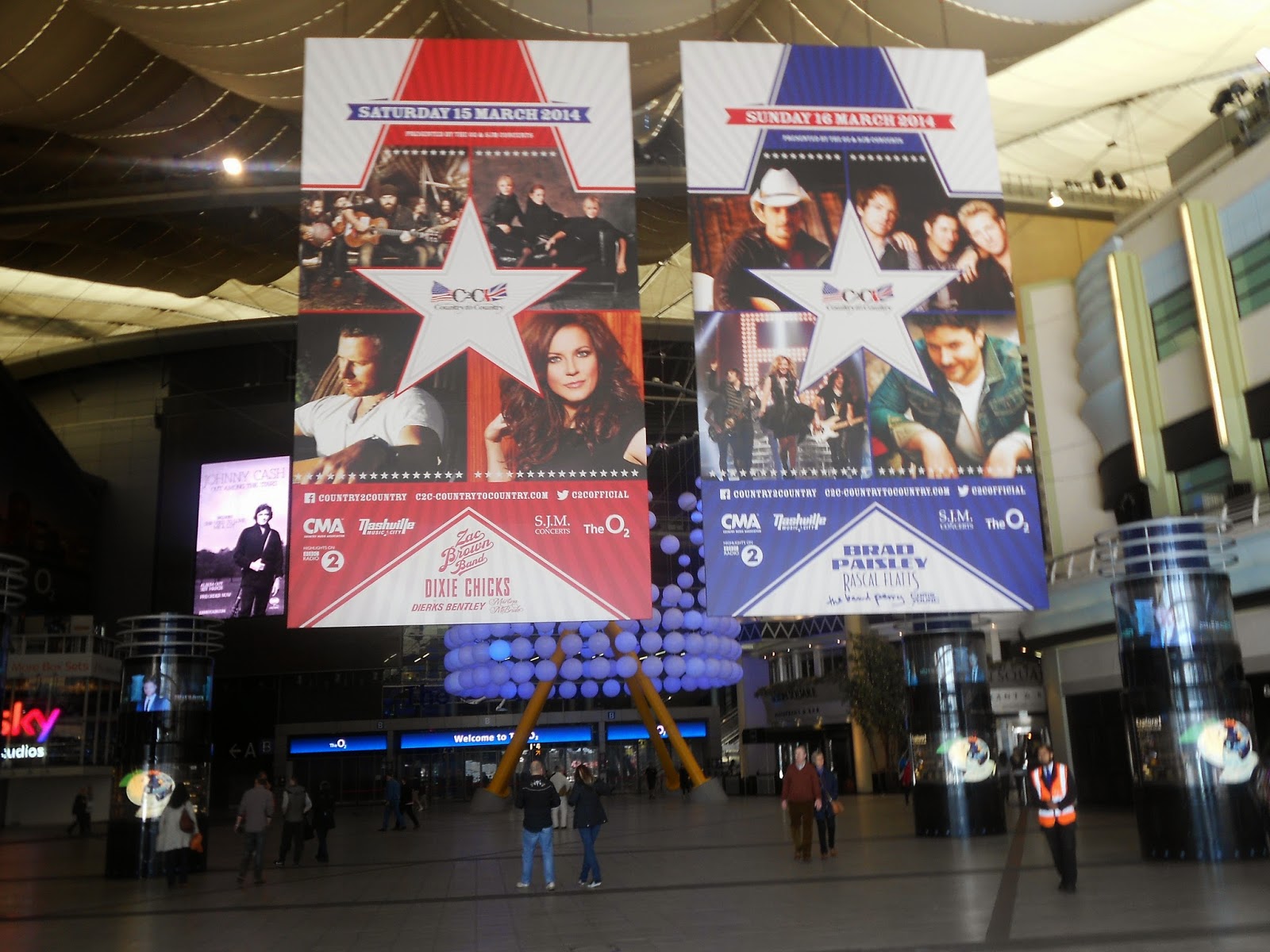 A few people have asked me who I would like to see at C2C 2015 (dates have already been announced - 7th and 8th March in both London and Dublin) Whilst I wouldn't want to go as far as to place them in any type of line up, I would love to see Jake Owen, Brett Eldredge, Gloriana, Sugarland, Jo Dee Messina, Faith Hill, Kip Moore, Sheryl Crow or Trisha Yearwood as part of next year's festival.