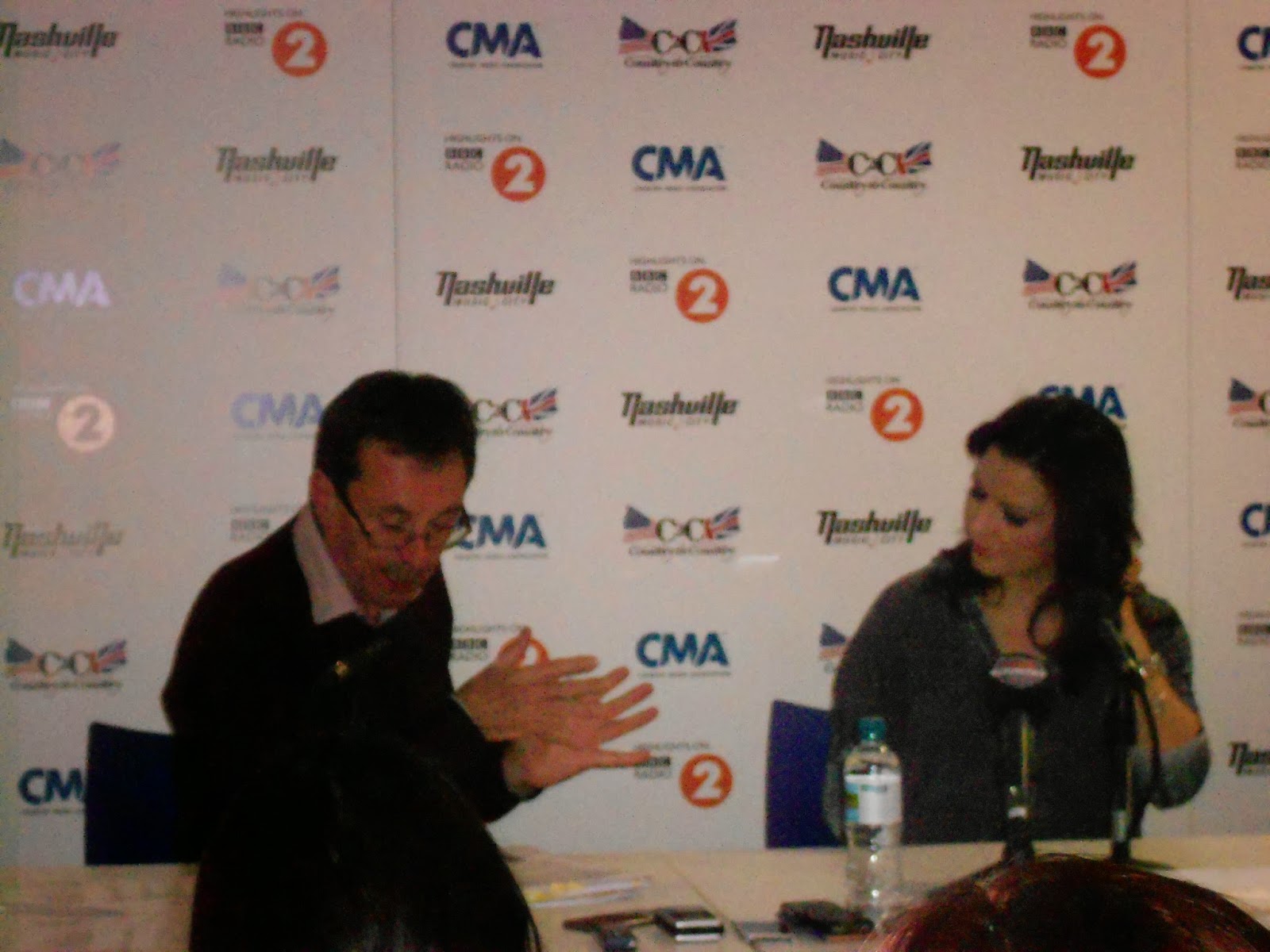 As part of Country to Country I was given a press pass so was able to attend any of the various press conferences. On the first day of the weekend I was at Martina McBride's press conference....

Who chose the songs for your album? Did you?

Yes I did. I chose the songs, Don Was helped as well as an A&R person that I worked with out of New York city named Monica Lynch. It was about a six month process of looking through the treasure trove of songs that were available to us and we ended up just really landing on songs that I felt good about, that I felt like I wanted on my record and wanted to interpret.

Watching you at the Songwriter's night last night I thought that you were just as comfortable in an acoustic situation as you are on the big stage, is that right?


Yes absolutely it was so much fun last night. I love singing with the full band but singing with an acoustic guitar is very intimate and it's nice to hear a different version of the record that we all know, more of an intimate kind of songwriter kind of version. So yeah, I did enjoy it very much.

This is your second album of covers, how does the process differ from "Everlasting" to "Timeless"?


It differed a little bit in the way I approached the songs. When I made "Timeless" my approach to those songs was very faithful and I really just remade those records. I wanted to pay tribute to those records of the late sixties, early seventies in country music and with this record I wanted to stretch a little bit and do versions that were faithful to the original but also had my own input and style as well. I think it was a little bit more of a confident approach, just having nine years to mature and just to think about different ways to approach cover material. 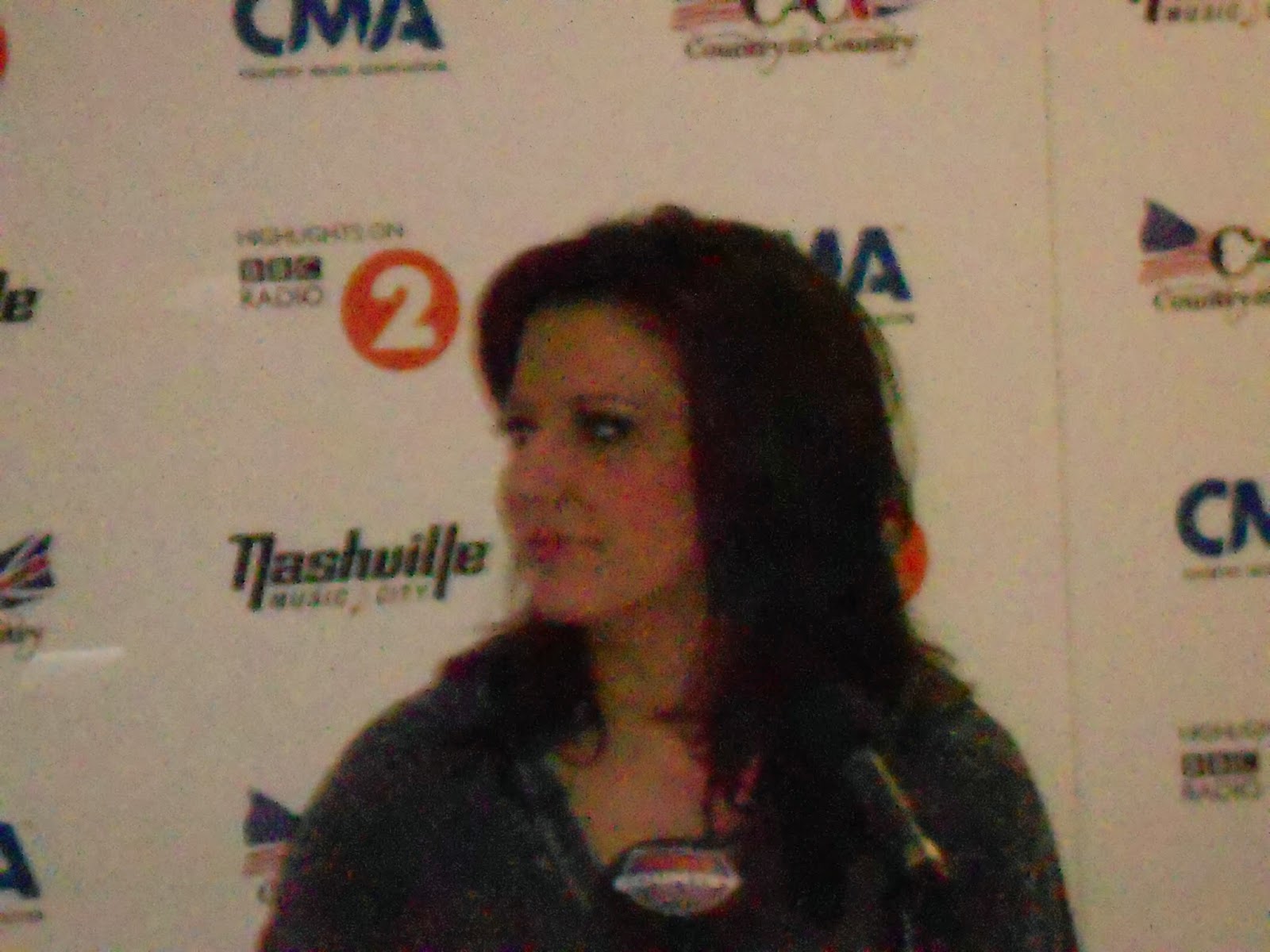 How does it feel to be back in the UK and to perform on stage at the O2?


It feels amazing! I wish I could come here and do a lot of shows here, which we're working on actually. It's just always great to be here. After the show last night I got to go down to the front of the stage and meet with a bunch of fans and take pictures. It was really lovely to see everybody and some fans that I've had for a really long time so I saw some familiar faces. We love coming here and I'm so happy to be on this festival.

What is your view on why women are currently struggling on country radio?


I think there are a lot of factors, some of it being politics, there's always politics in the music business. I think it's cyclical, a few years ago, it's been quite a few years ago now, we had a lot of women on country radio and everyone was questioning why are there so many women on country radio so I think it's cyclical, I think that there are women making some amazing music right now and I think eventually it'll get heard I hope. People like Brandy Clark made a great album and Ashley Monroe, there's just some really great female artists out there right now so I hope they get the chance to be heard.

Do you find it frustrating at all that it's difficult in the UK for country acts to break out of the genre and have an impact on the mainstream charts and do you think there's any reason why that is happening? Do you think it's frustrating that Taylor Swift seems to be the only person that's perhaps been able to have a really big impact on the UK charts?


Well first of all I'm really happy for her, I think it's great. I don't know a lot about that to be honest so for me to speak to it would be a little....I just don't know why. For me, we've had really good luck here when we come over here and tour and I know I have some really faithful, passionate fans here. It's very expensive to tour here, for us to come and bring a band, to come here and do a proper tour so that's one factor that makes it difficult but as far as the big picture I'm not really sure but all I know is that we have some very passionate country music fans in the UK. 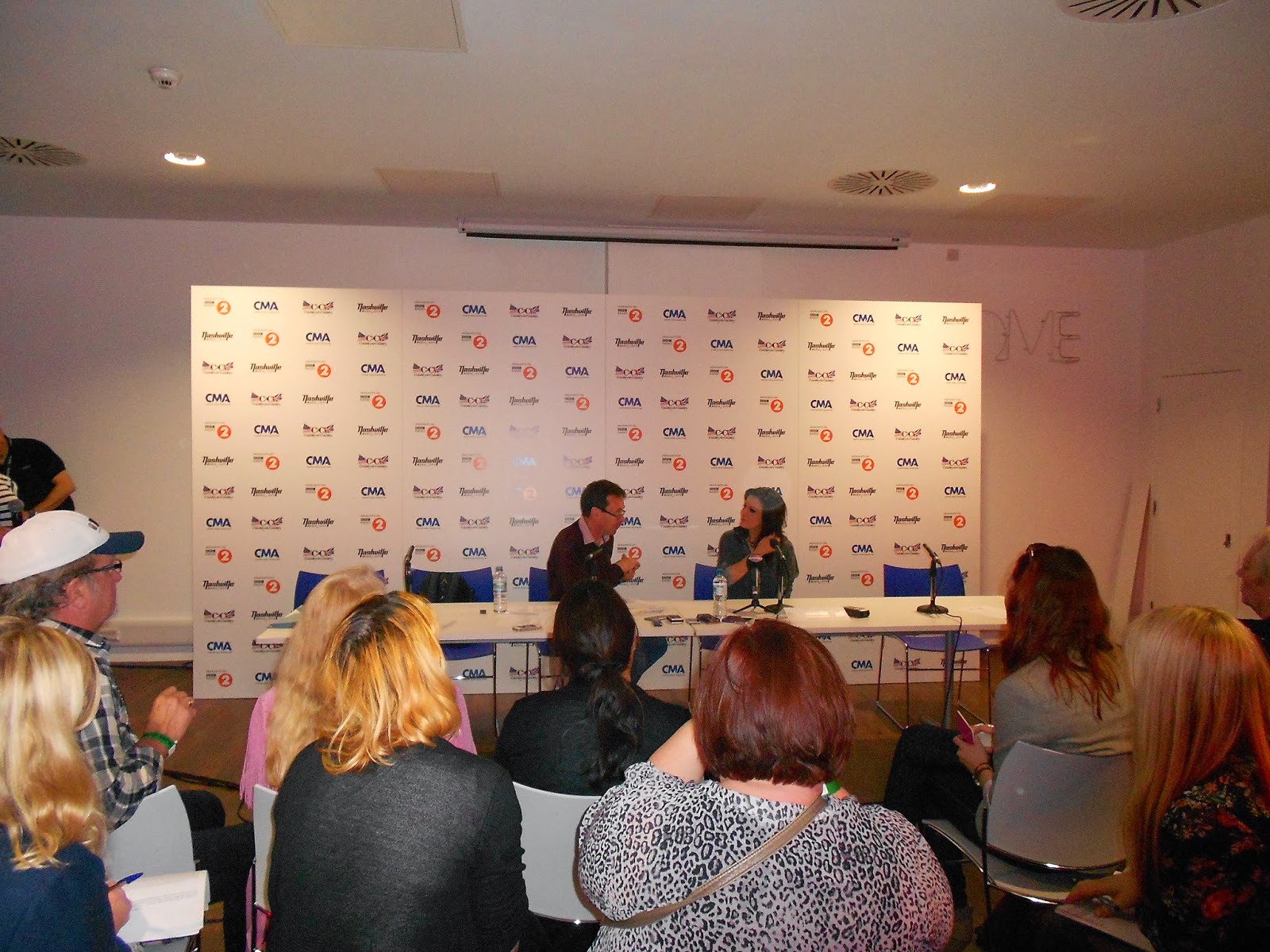 You mentioned Taylor Swift, do you feel any pressure from the new sort of genre of female country artists, Taylor Swift, Kacey Musgraves. Is there a big pressure on yourself to change or do you feel you stay strong in your own traditions?


No I don't really feel pressured by any other artist, male or female. I feel like I've always just done what I do and stayed true to myself and the music that feels right for me so my thoughts about that haven't changed.

You haven't been afraid about tackling difficult subjects in songs, can you talk a bit about some of those songs?


It was interesting when I went to Twitter to ask for requests for the show tonight and had an overwhelming amount of requests for "Concrete Angel" so I do think those songs really strike a chord with people and touch people in a way and as far as being brave about it I don't know if I can take that credit in that way. I've just always done what I felt in my heart was right and I felt like when I heard those songs that there was somebody out there that would identify and maybe feel not so alone or maybe feel like somebody understood what they were going through and that was really my motivation for doing those songs. I think, back to your question about the female artists, it brought up a thought for me that I do think as females we do have more thoughtful....I shouldn't say that because of course there are a lot of males who have thoughtful songs out there [laughs] but the climate at country radio in America right now is a little bit more about having a good time, partying, hanging out in the country and having a good time and females generally speaking have songs that might not fit into that as easily so I think that's part of the problem right now and like I said I think it's cyclical I really do, I think it's going to come around to the other side of things.

You're an idol to many of the young female country artists, how does it feel to be someone who they are aspiring to be?


Well it's very flattering and I have my own idols that I looked up to when I was coming up through this business and still do so to hear that is very nice. I'm inspired by the new generation of all artists but female artists especially, I think they're making, like I said, some really thoughtful music but thank you for saying that, that's sweet. 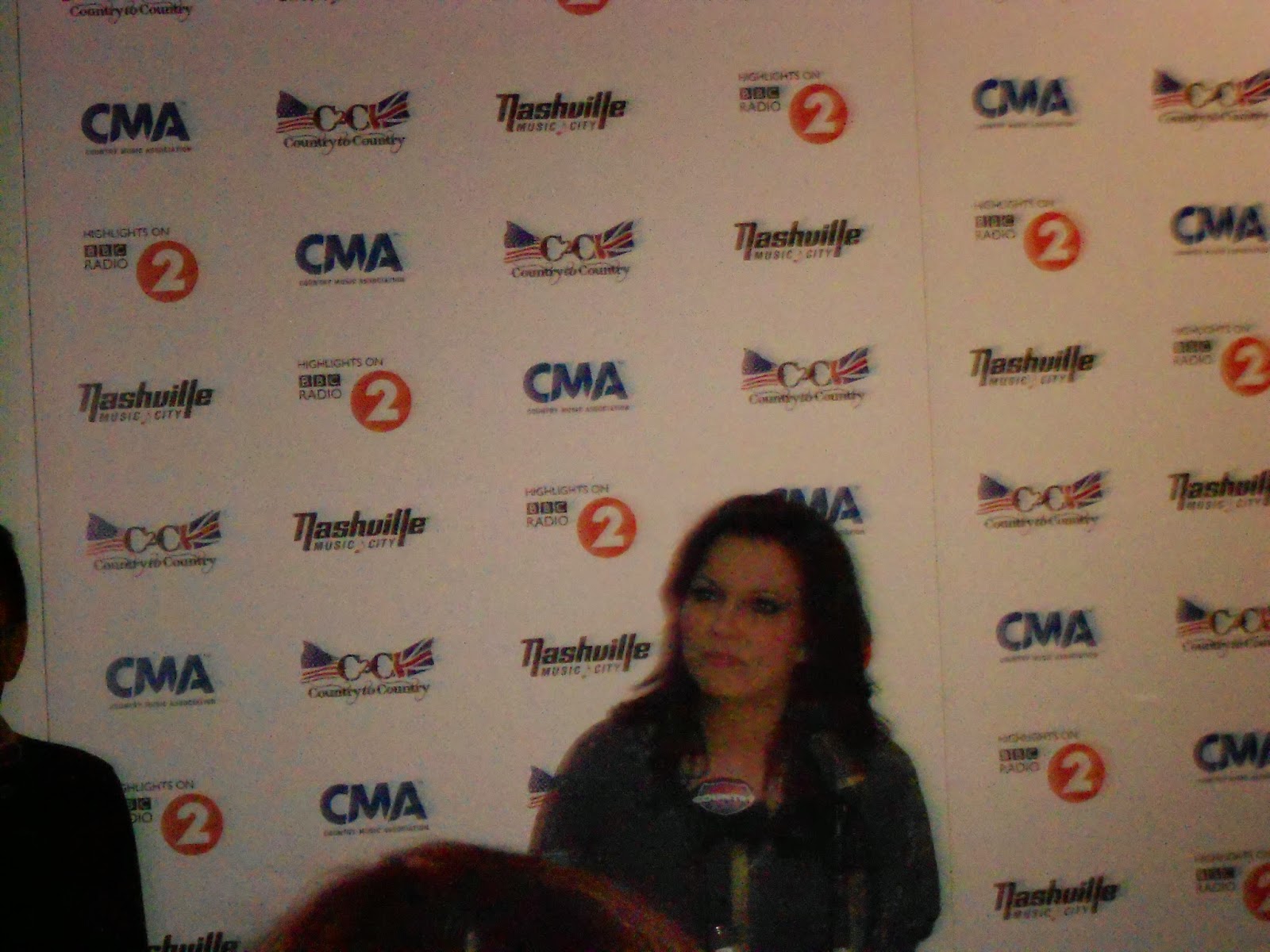 Do your girls like country music? Do you allow them to listen to it?


Yeah I do. My oldest daughter's nineteen and my middle daughter is sixteen almost so they listen to all kinds of music. I learn a lot about different kinds of music from what they play for me. They are country music fans, I've noticed recently they might not be listening to it as much as did at one point and I think that's a lot of the reason honestly, but the good news is they really love my new album! [laughs] and I'm so happy about that because some of these songs are songs that they know and some of them they don't but they play it in their car all the time when they're driving around and it just makes me happy that they're excited about it.

You've been in the industry for so long now, do you still get nervous being up against the songwriters who wrote your songs?


Oh yeah definitely. I got nervous when I performed "There You Are" last night because first of all I haven't done it for a really long time and I've never sung it in front of Bob [DiPiero] the writer and I knew I was going to forget something and of course that happened and you kind of you psych yourself up for it. Mostly more than nervous I just feel honoured to be there, to be part of that group, to be considered a songwriter at this point in my career when I've just really started song writing not very long ago, maybe ten years ago so it was just an honour to be there [at the CMA Songwriter's Series] and to be included, definitely.

It was great to get to be at this press conference! I sincerely hope Martina returns with a full UK tour soon!