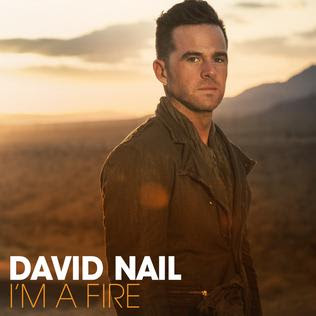 American country singer-songwriter David Nail released his third album, entitled I'm A Fire, on 4th March in the US and 6th March internationally. A distinct departure from the sombre sound of his previous two releases, I'm A Fire continues his progression as an artist and also sees him write four out of the eleven album tracks.
The opening track of the album, Whatever She's Got, is also the lead single. Originally released on 28th March last year, the track opens with a electric guitar and mandolin hook with the drums keeping a good pace throughout. With lyrics such as "she got the blue jeans painted on tight that everybody wants on a Saturday night", the track does not necessarily have the deepest meaning but in this instance it doesn't bother me. The overall production combines really well and you find yourself drawn into the 'good time' song.
There are a few gems scattered throughout this album, the best of which has to be When They're Gone (Lyle County). Featuring country group Little Big Town and co-written by up-and-coming country artist Brett Eldredge, the track carries strong credentials and it does not disappoint. The track opens with a soft acoustic guitar and hand claps with a steel guitar hook and the instrumentalisation builds slowly from there. Little Big Town's backing vocals are really strong with different members of the group fading in and out at points and joining all their voices for the chorus.

In my opinion another gem is the title track. Another instance of a very successful production, the main driving beat comes from a restrained drum and acoustic guitar hook that allows various other instruments to fade in and out over the top. Lyrics such as "you put the swing in my dancing" and "I'm a fire because of you" lead the listener through a track that is lyrically very strong - both co-writers have written some big hits.

Another track that is definitely worth a mention is the album closer, a cover of Galveston. David is joined by Lee Ann Womack for the track and their voices merge really well together. It has been almost four years since Lee Ann last released music so it is great to see her vocals included here. The track is well thought out and closes the album well.

The second single to be released is Kiss You Tonight. Whilst not a rubbish song in any sense, I did find that this doesn't stand up to the strength of the rest of the album and when playing the album I passed it by a few times without realising - and I also find myself skipping the track occasionally. In my opinion the other tracks tell a better story and there is nothing to make me want to comment on the strength of the production.

For fans of the slower songs that David has released previously, the highlight is Brand New Day. Aubrie Sellers (Lee Ann Womack's daughter) lends her impressive vocals to the track and the two artists deliver a heartfelt, emotive performance. The Secret is another more sombre track and has received a lot of positive press. David delivers another strong yet delicate performance with an instrumentalisation stripped back enough to mean that the real focus is upon the lyrics and the story behind the track.

All in all this is a brilliant release from David Nail. I own his previous releases but will admit I haven't played them very often - I do however know that I will be continuing to play this for a long time yet! I would recommend that everyone listen to this album, even if you were not impressed by his previous two albums.
Email Post
Labels: David Nail "I'm A Fire"