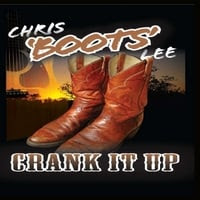 Virginian born Chris 'Boots' Lee has released his fourth album Crank It Up in 2012 . Now living in Australia, Chris has also won many competitions and awards including winning Best Male Vocalist at the 2013 Gippsland Country Music Awards.

Recently brought to my attention, the album features ten tracks from various different songwriters including Steve Wariner and Hank Williams Jr. Title track Crank It Up opens with a solid acoustic guitar line which then builds up smoothly with the addition of of banjo, electric guitar and drums. Melodically a very catchy track there does unfortunately not seem to be much lyrical depth, leading to a lot of repetition of lines such as "crank up the music, roll the windows down".

Always Wanting More is one of the strongest tracks on the album. The steady instrumental accompaniment from the electric guitar and drums produces a good backdrop for the track and Chris' vocals sound very comfortable throughout. Similarly, Addicted To The Rain is another good song. With a steady drum beat and electric guitar hook with occasional use of acoustic guitar. the instrumentalisation is substantial enough to round out the track well without overpowering Chris' vocals.

In my opinion, All My Rowdy Friends (Are Coming Over Tonight) is too rocky for the rest of the album. The almost frenetic piano playing makes the song sound like it is just running away with itself and the softer tracks suit Chris' vocal more as he seems a lot more comfortable in songs like that and sometimes seems to have to stretch a bit too much in songs such as this. This is unfortunately the case with Crazy As Me as well.

This is certainly an interesting album and I am happy that I was introduced to Chris' music. Whilst it is not my favourite album, it is certainly professionally produced and I know it will appeal to a wide audience. Chris is definitely an artist to keep an eye on!
Email Post
Labels: Chris Lee "Crank It Up"