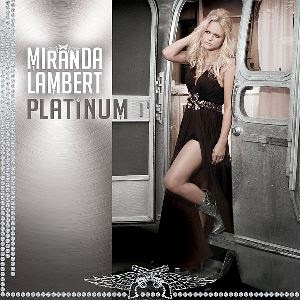 Released earlier this month, Platinum is the fifth studio album from American country artist Miranda Lambert. The album includes various collaborations - Little Big Town feature on Smokin' And Drinkin'; The Time Jumpers on All That's Left and Carrie Underwood on Somethin' Bad.
Admittedly I am not a huge Miranda Lambert fan and mostly bought this album on the strength of lead single Automatic. I would firmly say that Automatic is the best track Lambert has released in years in my opinion. The nostalgic feel to lyrics such as "seems like only yesterday I'd get a blank cassette, record the Country Countdown coz I couldn't buy it yet" and "hey whatever happened, to waiting your turn, doing it all by hand" fits in nicely with the production choices. The instrumentalisation is initially led by a soft acoustic guitar repeating hook that is then added to with other instruments such as drums.
Another great track is Priscilla. Launched with an upbeat, punchy acoustic guitar line, the track is inspired by a television documentary on Elvis and Priscilla Presley. With an unshakable hook that will draw many listeners back time and again, the production is certainly a triumph that - as with Automatic - works well against the lyrics.
The Little Big Town feature Smokin' And Drinkin' is a track I would immediately recommend to any listeners. Little Big Town are well known for their harmonising skill and this is clear in this track. As a listener, I struggled to pick out Lambert's distinctive tone at points in the chorus, however there doesn't seem to be any fighting between the five voices, with Lambert taking a strong lead in the verses. At five minutes thirty long the track is the longest on the album however I was surprised to see just quite how long it was. The overall production, vocal quality and strong lyrics make for a track that flows well and has quickly become a favourite of mine.

Whilst both Lambert and her Somethin' Bad duet partner Carrie Underwood are both strong vocalists, the track as a whole feels a little messy in my opinion. The a capella opening line is strong but then the electric guitar notes in the opening instrumentalisation are strongly discordant and this feeling grows in relation to the vocals in the chorus. There are also various instances in the verses where the lyrics feel a bit rushed to get them squeezed into the allotted space.

Shortly after Somethin' Bad is the Lambert, Brandy Clark and Heather Little track Two Rings Shy. Instrumentally this is unfortunately all over the place. I have listened to it many times to try and really focus on the lyrics and the vocals but unfortunately the incredibly poor production overshadows this. There are various instruments included in the track and the majority of them conflict at one time or another. These clashes also unfortunately mean I have yet to be able to comfortably listen to the track as a whole.

When initially listening to the album's first track Girls, I was pleasantly surprised and however I am finding the more I listen to this track, the more I want to pull the production back even more. The first verse is a real gem, with just a soft drum and acoustic guitar accompaniment and I think it would be really effective to continue along with that, or even to make it an acoustic number.

Whilst this album hasn't completely converted me to being a Miranda Lambert fan I am very impressed with quite a few of the songs on Platinum. I had purchased 2009's Revolution and previously 2007's Crazy Ex-Girlfriend however this is the first album of Lambert's that I have listened to more than a couple of times. The overbearing production that occasional appears on some of her tracks is certainly not needed and can spoil some of the numbers in my opinion. Whilst she always seems to gravitate towards the rockier tracks, Lambert has a voice that really suits the slower, more emotive numbers in my opinion and it is nice to see a lot of these scattered through the release.

A mixed bag of tracks that will certainly appeal to current Miranda Lambert fans and may also win her a few new ones.