Regular blog readers may remember my interview with country singer Joshua Scott Jones earlier this year (you can find it here alongside my thoughts on lead single Honk (If You're Tonky)) At that point Jones had just released his debut solo single and was readying his debut solo album The Healing for release. The album was since released on 3rd June and features eleven tracks, each one written or co-written by Jones.

In my opinion Whiskey Anthem is the real gem on the album. The production is very strong and suits Jones' distinctive tone well. The inclusion of the fiddle is one of the strongest choices, with the instrument coming in and out where needed and really adding a good dynamic to the track. Lyrically similar to the good time feel of Honk (If You're Tonky), lines such as "don't care what you said, gonna paint this town red" and "it's alright coz life's too short, it's not worth the fight any more" add another dimension of moving on from a relationship rather than just the typical good time party song.

City Of Angels is also another impressive track. The opening solid strummed acoustic guitar line gives a great accompaniment to Jones' vocals and also is a good point for the production to build upon. The decision to just have the piano and acoustic guitar accompany Jones' vocals allows a focus on his heartfelt delivery of lines such as "we rode around windy city on the train but we were going nowhere". 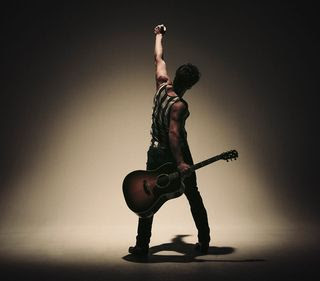 I was surprised to find the more I listened to Lover Let Me Show You My Heart the more I liked it. Full of traditional country influences it is certainly not something I expected Jones to release but it does actually work. His deep tone works well in the situation and is complemented with the female backing vocals.

I have mixed feelings about the album's title track. It is undoubtedly brave to finish the album with it's slowest track and the stripped back production gives a vulnerable feel to the track, added to with the lyrical story. I would however have to say that the rare production changes and slow pace can make the five minutes twenty nine seconds long track seem to drag and I found myself feeling a little bored after a while.

The production on Just How A Heart Breaks doesn't quite work. The lyrics feel like they fall over themselves at points and the punchy feel to the string arrangement in the chorus and the snare drum beat are the main parts of the production that seem to be fighting against the rest of the track which is a shame as it could be a really good song with just a few tweaks.

Overall The Healing is a compelling album that will serve as a strong platform for introducing Jones' style to new listeners and also keep those Steel Magnolia fans that will already be familiar with him. Whilst a name that most people would associate with Steel Magnolia, Joshua Scott Jones certainly proves with this album that he can stand strongly on his own and I am excited to see what future releases bring.
Email Post
Labels: Joshua Scott Jones "The Healing"