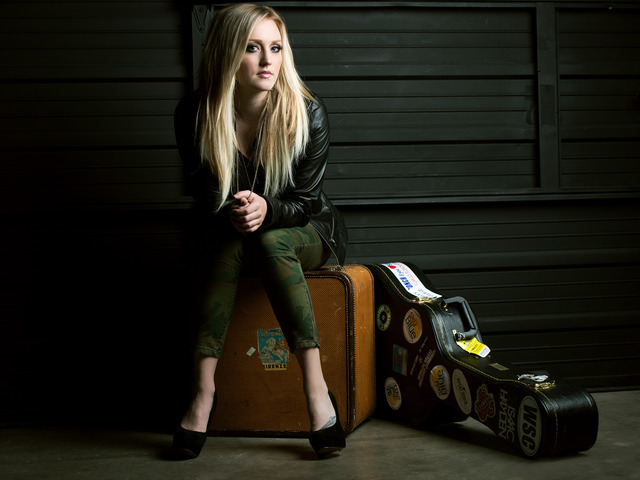 South Dakotan Hailey Steele is set to release her debut self titled EP on Tuesday, 18th November. Hailey competed on season two of the Voice US (alongside artists such as Gwen Sebastian, Nicolle Galyon and RaeLynn - although interestingly on Christina Aguilera's team as part of duo THE LiNE) and has gone on to write tracks such as the Gwen Sebastian cut Small Town Soul - a brilliant track - and the Raelynn cut Boyfriend - which is included on this EP.

Opening track Getaway Car is also the lead single for the EP. The upbeat instrumental opening - led mainly by guitar and drums - sets a good pace for the track and the EP as a whole. The production falls back slightly as Hailey's vocals enter and then builds up again towards the chorus meaning that the track is kept interesting and encourages listeners to continue on through the rest of the songs.

One of the strongest tracks on the EP, and my personal favourite, is Diamonds. Lyrics such as "Diamonds take patience and pressure and time" and "I'll live my story, line by line" show Hailey's song writing skill - she co-wrote the track with Chris Gelbuda. The soft inclusion of the piano in the track works really well, it seems to compliment the overall instrumentalisation strongly as well as adding a lighter sound. Hailey delivers an emotive vocal that makes you feel as though the track is very personal to her.

I also really like High Horse. The production has two distinct sounds in the track - the verses have a 'darker' sound from the drums and deep guitar line and then the chorus has a lighter sound as the drum playing becomes more staccato and the guitar line changes to a higher pitch. The occasional Western imagery in the lyrics is clever and comes across well through lyrics like "honey you ain't the only outlaw running round". It's an interesting take on putting someone in their place and the Western imagery could have definitely have been pushed further.

I was recently able to catch up with Hailey and ask her some questions....

What originally drew you to country music?


As far back as I can remember, music was always around. My parents started taking me to concerts at an early age. If I was at home, I was parked in front of the TV with CMT on.

You've written tracks for yourself and for other artists, which track is your favourite?


That's a tough call! I've written around 500 songs, and my favourites change with my mood and the more songs I write. Of course all five from my EP are staples, but if I had to choose a favorite, I would say "High Horse" or "You Made It That Way". The song "Small Town Soul" was cut by a fellow Dakotan, Gwen Sebastian, but that song will always be close to my heart.

Do you ever write with a particular artist in mind?


I'm inspired by a lot of different artists who are out there today. When I step into the writing room, I'm taking that inspiration with me, but I'm always drawing stories from my own life.

Which has been the hardest track to write?


I've gotten into this thing the past couple years where I just want to write fun, uptempo songs. It's kind of an inside joke that most writers are all emo and sensitive and they all have too many ballads, but that's actually what I struggle with the most. I have a tender side, but it just isn't as easy for me to show in song.

When you write a song how much focus do you put on your intended audience?


I think about my audience a lot. Most of my songs are geared towards women, because they are about topics that we go through. Every time I write a song I think, "if I feel this way, there's at least one other girl out there who will relate."

Do you prefer to write on your own or as part of a group?


They each have benefits. I love the writing community in Nashville because I'm surrounded by uber talented artists and writers. Co-writing is so great because you feed off of each other's ideas. I do also love to write on my own, but it's usually for the more personal, intimate songs.

Which is your favourite track to perform live?


"Getaway Car" and "Boyfriend" are so fun to sing and perform live. They're both fun to dance around to. I love singing "Diamonds" because of its hopeful message, and it's fun to hear people's reactions to it.


There's a song on the new Lee Ann Womack record called "Send it on Down." It made me cry the first time I heard it. It's so real and you feel it from the very first line.

Getaway Car is the lead single from your new EP, how was the decision made to pick that track?


GC is a fun song, and it gives the listener a fun little window of who I am and how I sound. It's light hearted, but it's still a good representation of my personality and what I sound like musically and vocally.


There are so many artists I want to collaborate with...Willie Nelson and Sheryl Crow are at the top of my list. I grew up going to Willie shows, and Sheryl is probably my biggest influence as a writer.

How would you describe your music to new listeners?


I would say it's the attitude of Dolly Parton with a touch of Sheryl Crow and Miranda Lambert. I write from a woman's perspective, and I try to say what a lot of people are thinking. Some of it is sad and sweet, but most of it is fun and in your face.


From Heidi Newfield...I met her backstage when I performed at FarmAid in 2002. As she was signing my guitar, she said, "I'm gonna tell you what Reba told me years ago, and that is to just keep going." That meant so much to me, and she was so sweet.

If you could only have one CD which would it be and why?


Willie Nelson's greatest hits. My motto about song writing is "May the best song win." I love to write, but if I find something that I connect with and is better than anything I've written, I'll sing it. Willie was great at doing that, but he's also written some of the greatest country songs of all time.

Any plans to tour the UK?

Hailey's vocal tone is an interesting mix between a sweet poppy sound and a Southern twang that travels through each of the tracks on the EP smoothly. I'm very excited to hear what a full length album from Hailey will bring, this is undoubtedly a very strong release from her and she is definitely an artist to keep an eye on!
Email Post
Labels: Hailey Steele "Hailey Steele"