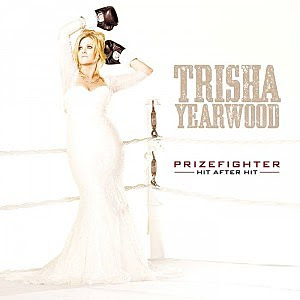 The album's title track was released as the first single in September. It is definitely a good idea to include this as the first track on the album, PrizeFighter being one of the six new tracks. The track features Kelly Clarkson and I felt like she was out sung by Trisha throughout the track and feels a little uncomfortable at points which is the biggest let-down in the track. Lyrically though the track has a great message behind it. Written by a group of incredibly talented country music song writers (Jessi Alexander, Sarah Buxton and Ross Copperman) - who, between them, have been involved with songs such as Brett Eldredge's Beat Of The Music, Lee Brice's I Drive Your Truck and The Band Perry's Don't Let Me Be Lonely - lines such as "when you hit the ground, you find your wings, you go one more round when that bell rings" build into a strong, powerful image that Trisha delivers with a gutsy vocal.

Some listeners may recognise some of the new tracks on the album from versions by other artists. Met Him In A Motel Room for instance was previously released by Gwen Sebastian in 2012. As a fan of Gwen's I was immediately intrigued to hear what Trisha's version would sound like and I am certainly impressed by what has been delivered. The overall sound is reminiscent of tracks such as Let The Wind Chase You and Real Live Woman, with a soft guitar led production which gives room for the vocals and the story to be the real focus of the track.

The album is closed by what is, in my opinion, one of the best re-released tracks included on the album - The Song Remembers When. With it's soft opening production giving a strong contrast to the previous track ( XXX's And OOO's) the track immediately draws you in even though many listeners will have heard The Song Remembers When before. It is, in my opinion, a very strong track to close out the album with, Trisha delivers her usual brilliant vocal and the production builds up a sense of both power and delicacy which I am sure will interest listeners new and old.

I also have to mention the strength of Heaven, Heartache And The Power Of Love. The track has the most bluesy sound of the tracks whilst also being considerably rockier than some of the others. It is also the newest of the re-recorded tracks included on the album and gives a nice contrast to the tracks either side of it, Your Husband's Cheating On Us and Georgia Rain with it's pacey, rocky sound.

End Of The World is one of the weaker tracks on the album in my opinion. It feels a little busy production wise and I didn't find anything within the track to grab me as others have. I like the electric guitar and soft drum instrumentalisation in the verses, the chorus production just feels a little excessive with it's heavy, pounding drum beat feeling the most uncomfortable and a little overpowering.

There has been divided opinion as to whether Trisha should have released this 'compilation' of new and old tracks rather than wait a little longer and release a full album of new material. I would have to say that I feel this works well and welcome the release. It has to be remembered that some of these songs are over fourteen years old - She's In Love With The Boy for instance made it's first appearance on Trisha's 1991 debut album - and they still remain great tracks.

Trisha continues to impress with her amazing vocal, travelling between upbeat numbers like You Can't Trust The Weatherman and slower tracks like How Do I Live with ease. Of course I would love to hear an album from Trisha full of new material but as her first album in seven years I think this bridges the gap well and also introduces her music to a new generation of listeners and potential fans.
Email Post
Labels: Trisha Yearwood "PrizeFighter:Hit After Hit"