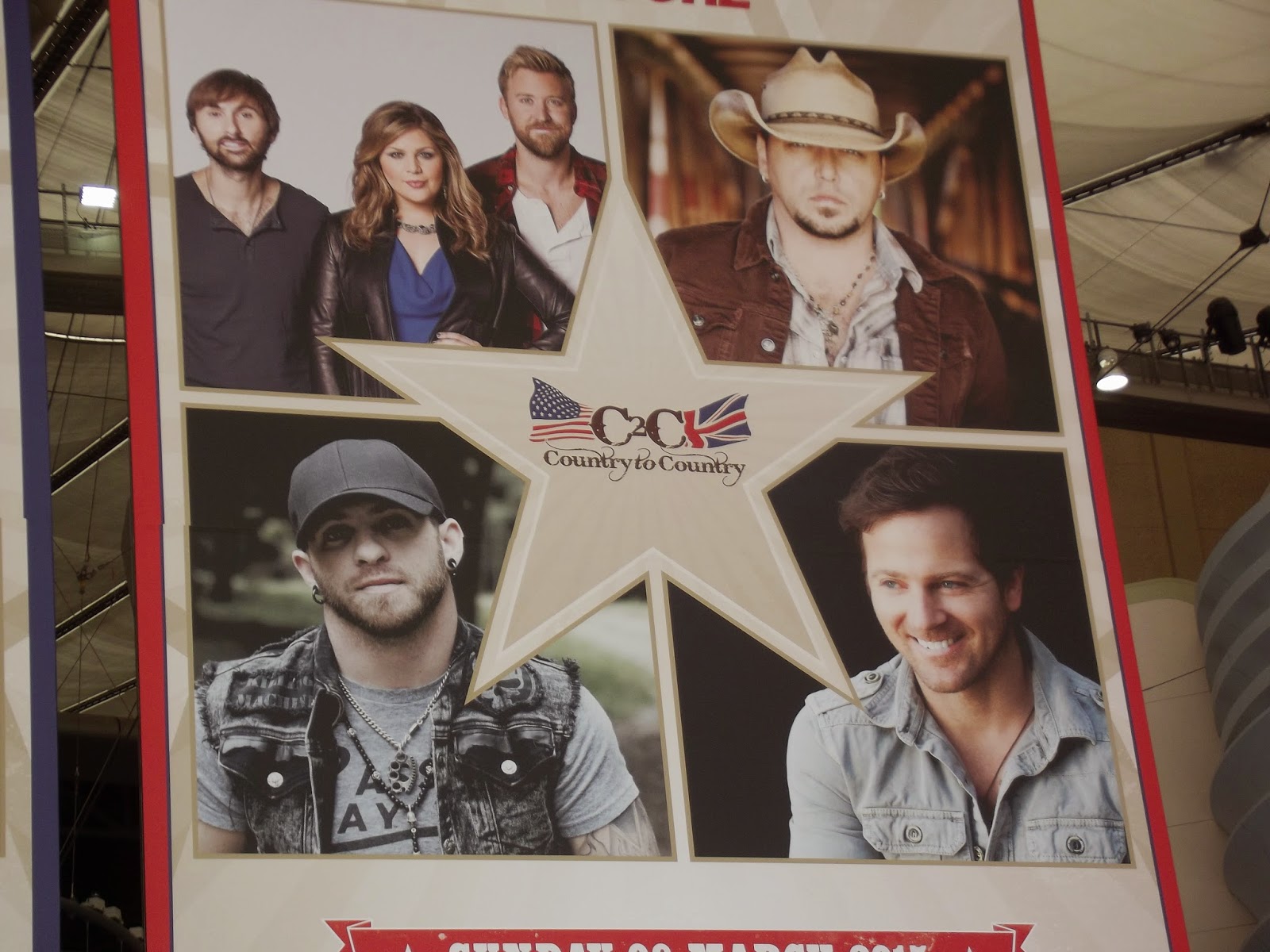 This year's Country To Country Festival continued (and finished) yesterday with Kip Moore, Brantley Gilbert, Jason Aldean and Lady Antebellum on the main arena stage. The show was again compered by Bob Harris and had BBC Radio 2 Country in attendance. As with the previous day there were a lot of pop up stages throughout the external arena and I was able to see part sets from Claydon Connor and Jeannine Barry and a full set from The Cains Trio. I hadn't really listened to Claydon Connor before the weekend but was quite impressed by what I heard! It has been almost two year's since I've last heard Jeannine Barry live and you can tell she has definitely developed as an artist, performing some of her own tracks and a great cover of Little Big Town's Girl Crush. After having seen them on Saturday I knew I wanted to see another set from The Cains Trio, who were on the Town Square stage this time. They sprinkled a few covers into their set, which again included that gorgeous version of Landslide. It was great to see the really positive response they had from the assembled audience as they sang tracks from their debut album such as Beautiful Life and Smoke On The Hill and also sang a track they were releasing to C2C fans for free, Down To The Water, which also sounded great! Yet again, they did not disappoint.

I had also really wanted to attend Striking Matches set as I won't be able to see them live when they return to the UK in May but unfortunately the queue to enter the Brooklyn Bowl (where their set was taking place) was incredibly long and after a while the staff came round to say they would have to close admittance until people left in around half an hour (after Striking Matches had finished) It was a definite shame as they were on one of the open stages last year and a lot more people were able to get to see them. As with the first day I was able to attend some of the arena artist's press conferences before the main show started, yesterday I was able to be there for Kip Moore and Lady Antebellum. 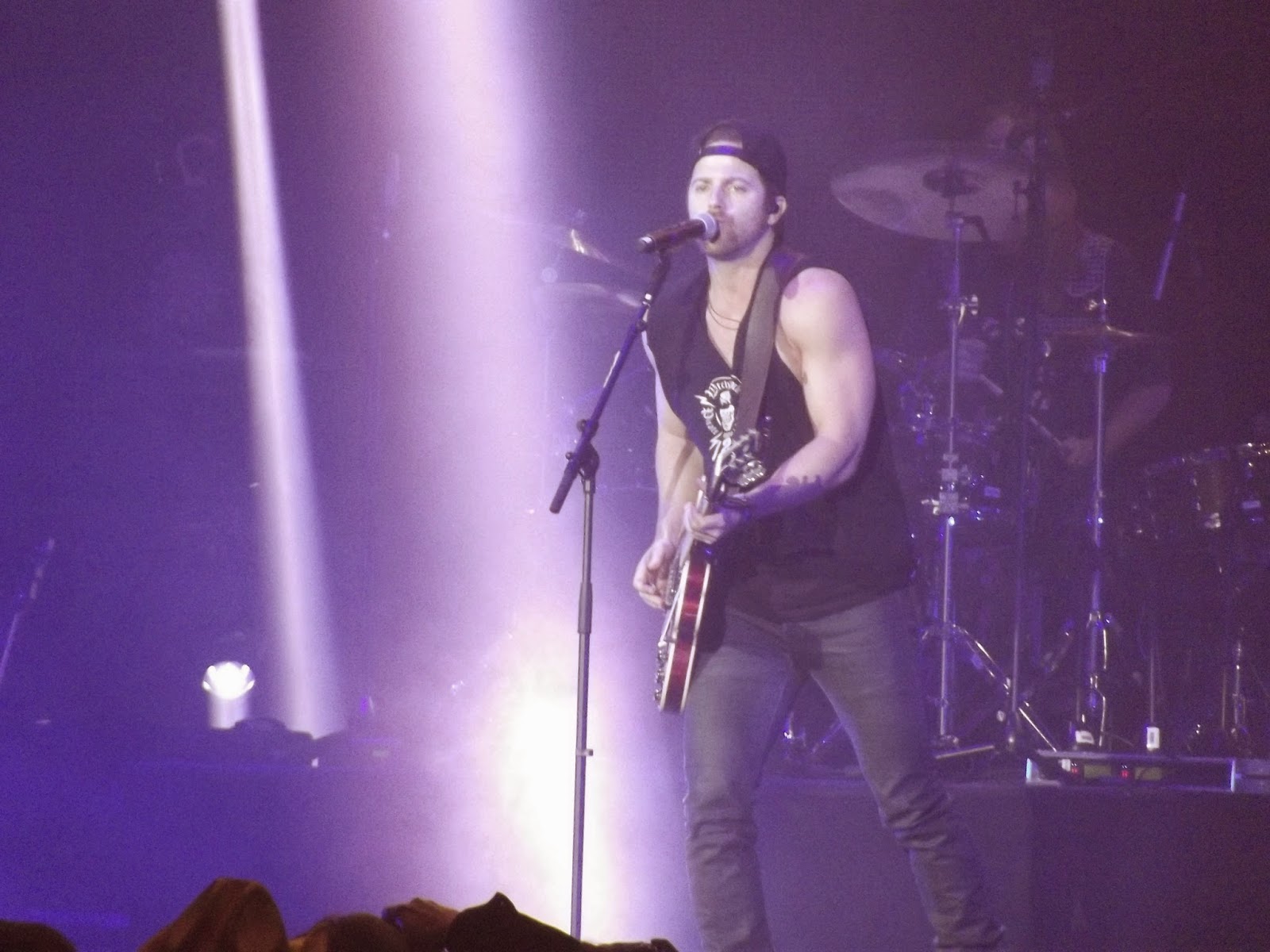 I knew a lot of people (myself included!) were really looking forward to Kip Moore's set and he delivered an amazing performance, including two tracks rumoured to be on his next album, Wild Ones and Come And Get It. His set was over far too quickly, he seemed completely comfortable on the stage and the audience seemed very receptive. Reckless (Still Growin' Up) has been one of my favourite tracks of his for a while so it was great to hear that - and to hear it sounding exactly like it does on the album! Hey Pretty Girl was also a really lovely moment. The track has a touching story anyway but to hear it live with it's simple production really let that shine. It has a softer production than a lot of Kip's tracks and really gave him the opportunity to show off his vocals. He also covered Don't Look Back In Anger which had the whole arena singing along yet again (the majority had been singing all the way through Kip's original tracks also). It would have been great to hear Faith When I Fall (a personal favourite) but an amazing set from a really talented artist! Definitely my second favourite performance of the whole weekend!

Ward Thomas were welcomed to the Satellite stage immediately after Kip had finished and The Shires took the stage after Brantley Gilbert. The Shires were the better of the two in my opinion, it seemed as though they were more at home on the stage and their vocals were brilliant. Their Satellite stage performance also gave them the opportunity to announce they had made history by being the first UK country band to have their first album debut in the top ten on the UK all-genre charts - it came in at number ten - congratulations to them! 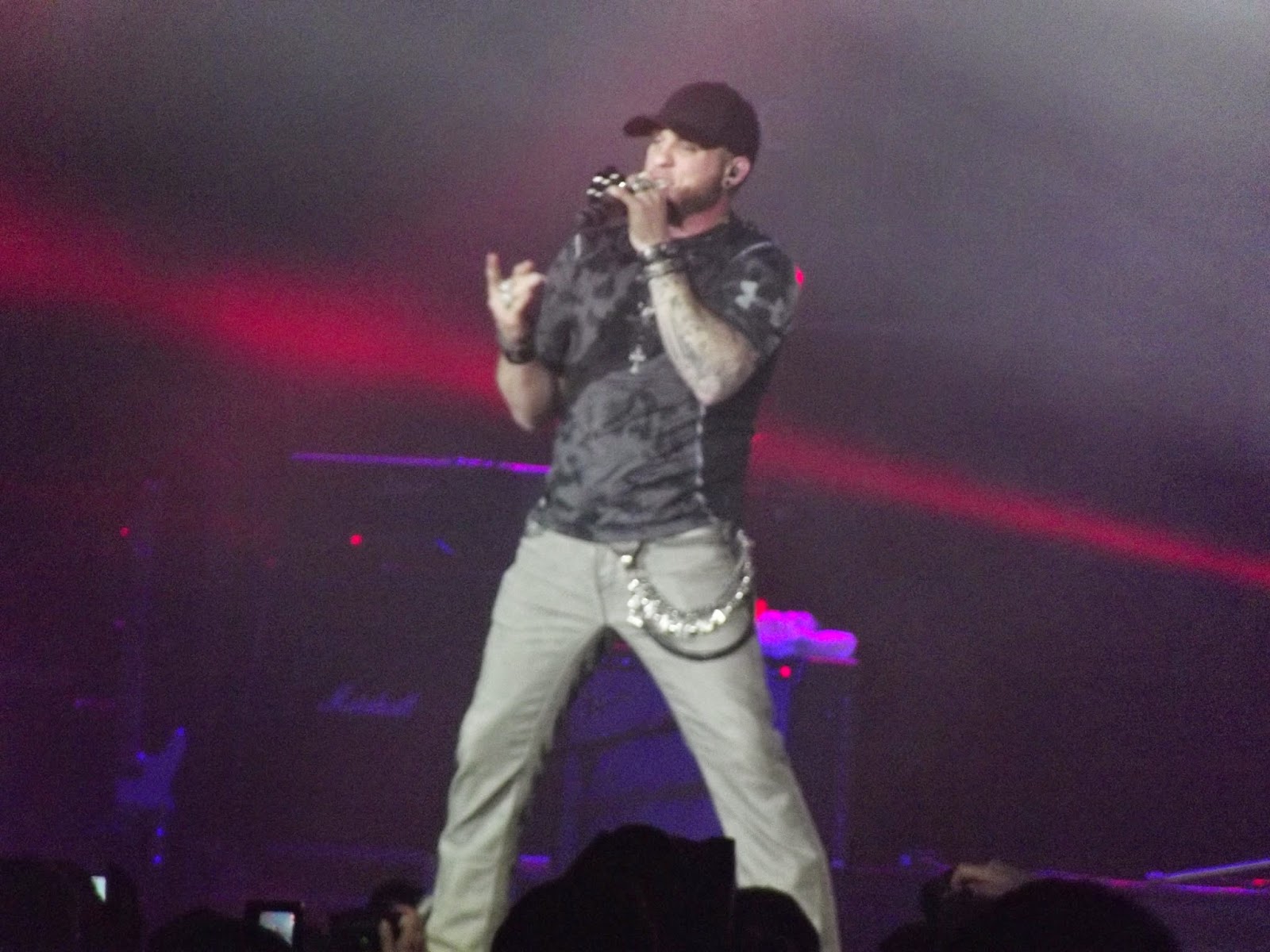 Brantley Gilbert was the second artist of the night to take to the main stage. I had expected him to be rocky and he certainly was, the volume verging on being too uncomfortable. One Hell Of An Amen was the best track, partly due to it's lesser focus on the electric guitar and Brantley's strong vocal performance. Bottoms Up was also great, one of the tracks that originally drew me to Brantley's music. A lot of the audience were clearly very responsive to Brantley's set and he seemed to pick up on that, unfortunately, I just felt as though there wasn't anything in his set to really grab me compared with all the other artists that were on the bill over the weekend. 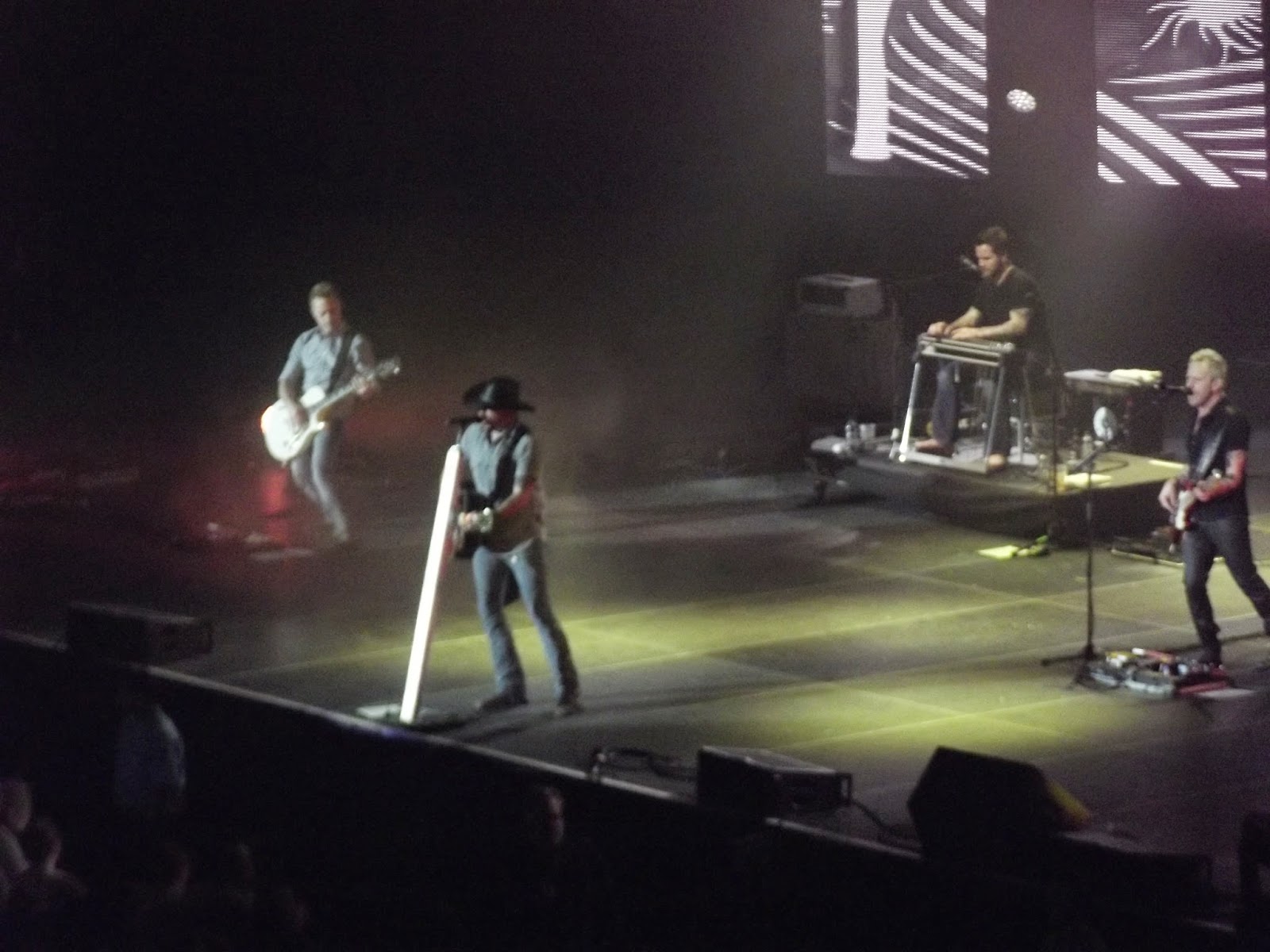 Shortly after The Shires' Satellite stage set Jason Aldean took the stage to pounding drums and pyrotechnics. Unfortunately I was completely unimpressed by Jason's set - it sounded even louder than Florida Georgia Line the night before, to the point that the sound, once again, was distorted uncomfortably. His set was honestly one of my least favourite of the weekend, the pyrotechnics felt excessive and his tracks are uninspiring. I will say that I did quite like his performance of Two Night Town, it was rocky enough to stay in keeping with the rest of his music whilst not being overpowering and it actually allowed Jason to showcase a strong vocal, something that seemed blurred throughout most of the rest of the set. 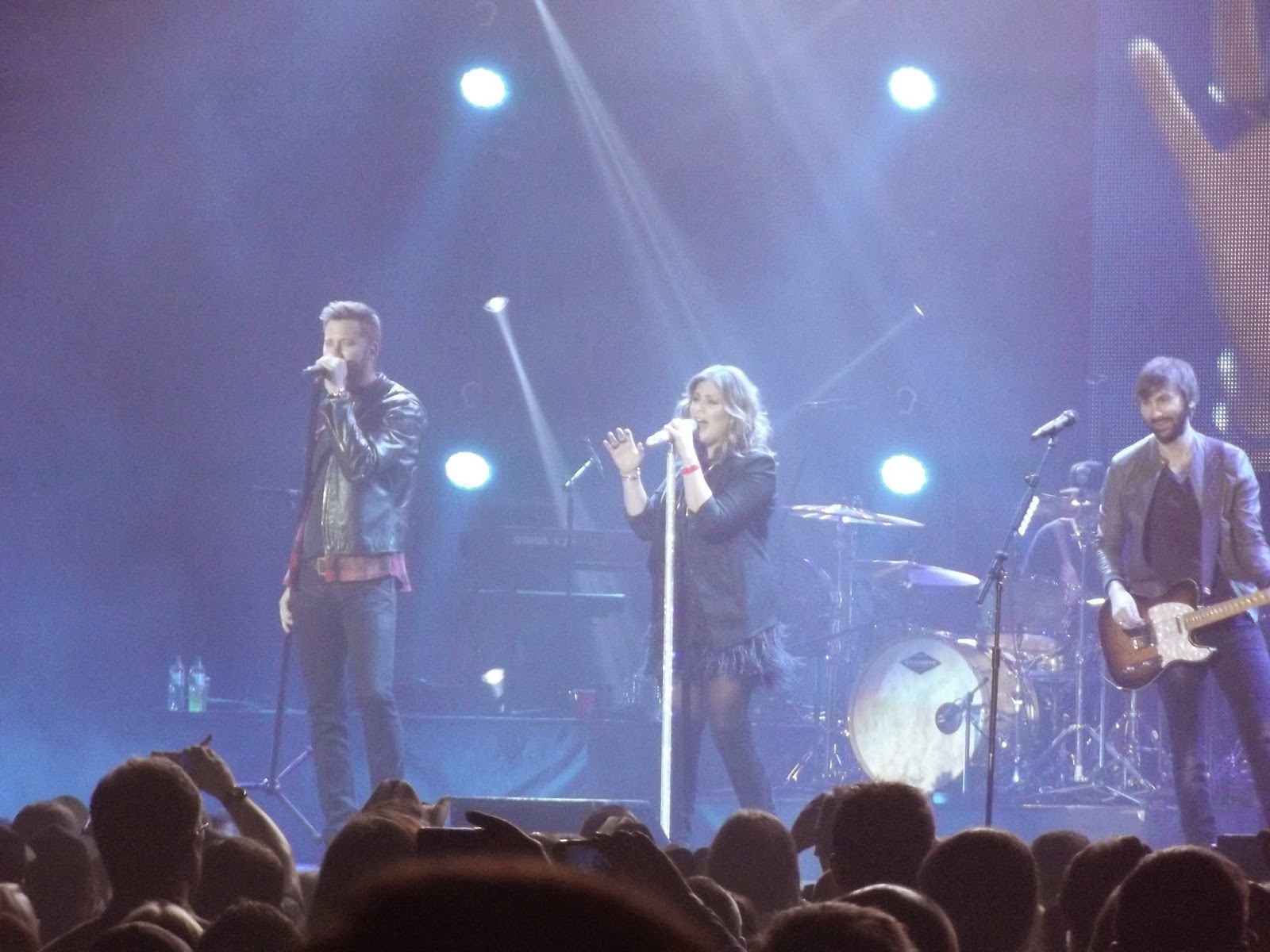 It was down to Lady Antebellum to both headline and close the last day of the festival. Considering the sound levels of Brantley and Jason's sets I was a little apprehensive to hear what the sound would be like with Lady A but I must say it was spot on. This was the third time I had seen time live (although I haven't seen them in a few years) and they were honestly incredible. They were really tight as a band and shone throughout their whole set - which was over far too quickly! It was an interesting mix of tracks with old favourites such as I Run To You and Just A Kiss mixed in with tracks such as Long Stretch Of Love and Lie With Me from their newest album. There were also three covers in the set, Islands In The Stream, Wake Me Up and Cups (You're Gonna Miss Me), with Islands In The Stream being the strongest of those.

I have long said Lady A deliver some gorgeous ballads and whilst the majority of their set was up beat I was thrilled to hear One Great Mystery as well as a medley of some of their other ballads in a short acoustic section, One Great Mystery being one of my favourite tracks of theirs. The energy was high throughout the whole set and Lady A interacted with each other, their band members and the audience as a whole really well. Outstanding set from the trio, they should be really proud of what they delivered!

Lady Antebellum were definitely the high point of the whole weekend for me, closely followed by Kip Moore. Lady A have always been really embraced by UK fans and that was evident from the audience response to their set, I noticed many people joining the audience solely to hear them. Considering it was his first performance in England Kip really impressed me (and others) and made a lot of new fans! Definitely a great vocal and overall performance throughout his whole set. I can't wait to hear the line up for next year's festival!