August 21st saw the highly anticipated release of Kip Moore's sophomore album, Wild Ones. The album's title track opens the thirteen song strong release with a gritty, rock influenced sound that listeners have come to expect from Kip. The strong drum line has a great repeated hook throughout the majority of the track that serves to add another dynamic - changing from the typical, basic, drum line - and serves to help make the track one that you want to hear again and again.

Lead single I'm To Blame is also a very strong track, one I have already found myself listening to many times. It instantly feels as though this would be a great song to hear live, the strength behind production and Kip's gutsy vocal delivery makes I'm To Blame a great track and one that I can really see people singing along to during a live performance. Lyrically unapologetic, Kip delivers lines like "no they don't make guys like me, you get exactly what you see" in a way that builds upon the production base, creating a great track that I am sure will appeal to listeners.

Situated just after the middle of the album, Complicated has a strong drum beat that makes you want to tap your foot along to and "it don't always go like you hoped it would but sometimes complicated is pretty damn good" gives an interesting take on a love song. The contrast between the simple production in the verses and the heavier production in the chorus rounds out the track nicely.  Heart's Desire is also definitely worth a listen to. With one of the catchiest (and most likely the shortest) chorus' on the album, the track is incredibly playable as well as having a strong lyric behind it.

Two tracks really stood out for me as the gems on the album, Running For You and Comeback Kid. Both songs prove that Kip can deliver softer, more emotional tracks just as well (if not better!) than the rockier, more upbeat numbers. Running For You still has a rock orientated production but the instrumentalisation is stripped back further than in other tracks, something that manages to give the track a sense of both strength and vulnerability. Vocally, it feels as though Kip pours emotion and power into his delivery of the lyrics, particularly in the chorus.

Album closer Comeback Kid sees a different kind of emotional delivery from Kip, a more delicate, almost vulnerable feel. A track that is over far too quickly and leaves you wanting to play the whole album over again, Comeback Kid focuses around the lyric of "girl I'm glad that you never did, lose faith in this comeback kid" and builds a really touching, heartfelt story. The track also holds one of my favourite lines from the album, "I'm a new used car with a couple of dents and I'll get where I'm going because I know where I've been". With a piano line playing a big part in the instrumentalisation, the contrast with some of the other tracks on Wild Ones really highlights the song and the piano works well with the other instruments. As with Running For You, you can feel the emotion exuding from Comeback Kid, it feeling as though the track is incredibly personal to Kip and that we as listeners are hearing something special, I imagine this is incredible live. 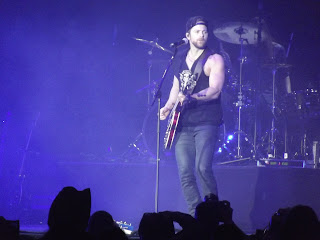 From the first few notes of album opener Wild Ones you know you are in for a treat with this new release from Kip Moore.  Kip builds upon the sound that he introduced in Up All Night with an album where he has co-written every one of the thirteen tracks, showing what a talented song-writer he is as well as an impressive vocalist. The fact that Kip has co-written every one of the tracks on the album means each track feels very personal to him, allowing a very strong performance of each number. With the whispers of a possible February 2016 UK tour coming up from Kip, I for one can not wait to hear this album live! Wild Ones is certainly an incredibly strong contender for album of the year, it doesn't feel as though there is a single 'filler' song on the album, each track having it's own strengths but together creating a brilliant album. Kip should be thrilled and very proud of what is on this record, congratulations to him and all who were involved!