Ten favourite albums of the year! 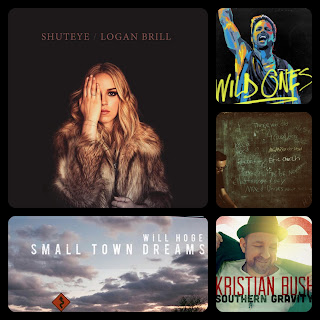 Tara and I decided a while ago that when the end of the year came we would settle down and think of each of our top five albums of the year, that time has now come! There have been a lot of very strong albums this year but the following five really shone in my opinion, all five of which deserve to be a part of any country fan's music collection! Huge congrats to the five artists below:

The debut solo album from Kristian, Southern Gravity is a journey through twelve brilliant songs all co-written by Kristian himself. He has a great vocal tone that shines throughout the entire album, with songs like the touching House On A Beach and the incredibly catchy debut single Trailer Hitch proving he is both a talented singer and song-writer. Kristian clearly knows what sound suits him and Southern Gravity showcases him at his strongest.

The 'surprise' album from Eric Church initially made me a little apprehensive after the quite distinct sound of The Outsiders. After listening through however I found myself loving the album. Eric's vocal tone seems to slip comfortably through every track and the lyrics are some of the best I've ever heard from him. Quite possibly the best album he's ever released.

Wild Ones is the second album from Kip and was introduced by gutsy lead single I'm To Blame. Kip's clear passion for music exudes from every single song, particularly through the final two tracks, Running For You and Comeback Kid.  Each track has it's own strengths that all come together to create a very impressive album.

The tenth album from the extremely talented storyteller, it feels as though Small Town Dreams gives the listener a window into Will's soul. Each song feels incredibly personal to him, from the slower, heartfelt numbers to the rock influenced, upbeat tracks and I defy you not want to listen to this album over and over again. Will draws you in and delivers a multi-faceted album that truly shines.


Logan builds upon the promising sound listeners were initially introduced to with the release of her debut album with this new release. Shuteye also highlights two outstanding collaborations, I Wish You Loved Me featuring Charlie Worsham and The Woman On Your Mind featuring David Nail. With a multitude of excellent tracks to choose from, current single World Still Round is certainly a worthy choice, Logan's vocal feels completely at home throughout this track and, in fact, the rest of the album. Proving she is truly a force to be reckoned with, Logan Brill's sophomore album is truly outstanding. 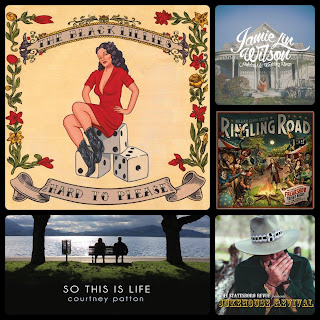 For me, a great album is one that moves you, literally, but also, and more importantly, emotionally. An album
that reaches in and draws out feelings from bliss and joy to crocodile tears. These ten albums did just that. They were the ones I consistently and repeatedly found myself returning to all year long....and the ones I will surely be playing well into 2016 and beyond.

5 - So This Is Life, Courtney Patton

Pairing these women up because they just get it. Glorious and gorgeous voices paired with honest, impactful story songs of real women and real life that hit your heart.

One of those rare, complete records with keen observations on life, love, and society. Vividly detailing everything from circus life (“Ringling Road”), to society’s new norms (“Old Fashioned”), and delving into the intricacies of relationships with sharp, and often biting, lyrics. His writings are witty; filled with humour, heart, anger and truth….and will eventually find him being known as one of the best songwriter’s of his generation.

While many artists claim their latest albums as their best work yet, here that phrase absolutely rings true. Jukehouse Revival finds the band honing in even further on their one of a kind sound. It is a groove fuelled, soulful, joyous, forty minutes of “funky country” that celebrates life, love and hard work. It’s an album that will reinvigorate your musical soul whether you are in a juke joint, a dive bar, listening alone in your car or sitting on someone’s front porch.

1 - Hard To Please, The Black Lillies

The Black Lillies (Cruz Contreras, Trisha Gene Brady, Bowman Townsend, Sam Quinn, Mike Seal and Jonathan Keeney) return, reinvigorated on their latest release. It’s signature Lillies, but funkier, more vibrant, with a thick, welcome infusion of organ, saxophone, trumpet, and glorious guitar riffs. There’s a current flowing through this record; that is the push and pull of love: desire, dissolution and complications, pushed along by a soulful, bluesy groove. From the fabulous foot stomper “Hard To Please” to the gorgeous “Mercy” and the beautiful “Fade,” the songs are...visceral. Contreras and Gene Brady’s vocals have always complimented one another and both consistently convey what a song calls for whether it’s warmth, sorrow, honesty, or joy. TBL have poured their heart and soul into Hard To Please. You’ll not only hear it, but you’ll feel it in every track as you automatically sense that swell in your chest, recall a memory or notice your foot tapping. Don’t let the title deceive you, Hard To Please is anything but.

So there you have it! We hope you will listen to and enjoy these albums, let us know your favourites!