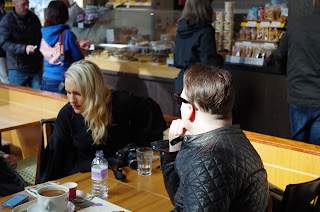 Country duo American Young is comprised of Kristy Osmunson and Jon Stone. Jon and Kristy work incredibly well together and, after having worked separately (Jon as a producer and song-writer and Kristy as one half of country duo Bomshel) they have brought their vocals and musicianship together to form an incredibly talented duo that is set to go far.

They are currently over in the UK as part of the Country To Country Festival and will then head out on a short European tour with Sasha McVeigh. I was able to catch up with them shortly before their debut performance and ask them some questions....

What drew you to the name American Young?


Kristy - I'd written a song called "Young In America" and Jon was like 'man that'd be a really cool name for a band, American Young. We were writing songs for the day and I googled it and it was available, the dot com and I couldn't even believe it. It was kind of ironic and funny because I was born in Canada so I was like heck yes! It was all encompassing and very purposeful. I felt like country music is really the truth of hopefully what we say as a society. I think it holds us to high standards of what our topics of conversation are. It's a great platform to be able to say something important. So yeah! [laughs]

Jon - How are you going to get out of this one? [laughs]

Kristy - Go ahead, I have no idea [laughs] I totally just blew the ending.

Jon - Kind of fades out awkward, sterile, look away [laughs] That's pretty much it, we heard American Young and we really liked it and I think that really defined our music as far as you're just as old as you really think you are. American Youngish dot com was taken.

Jon - And she's from Canada so we're the perfect contradiction, it's irony in it's rawest form.

Kristy - The last interview we did was some UK station and he's like 'so a Canadian and an American that's like an Irish and an English being in a band together' and I was like what do you mean by that and he goes 'well it's like you're the butt of each other's jokes right?' and I was like that's exactly! [laughs]

How did you both first meet?


Kristy - Well first time probably was at Tootsie's. Second was...

Jon -  Think about it, collect your thoughts. [laughs]

Jon - It was good, it was a fun little gathering. Myself, a cat named Jerrod Niemann and Lee just got together and played some songs we had written. Myself, Lee and Jerrod had had success with other acts, I've had a couple of songs recorded by Blake Shelton, Kenny Chesney, Jerrod's had a couple of Garth songs as well as Lee has. I'm pretty much the only one that hasn't had a Garth Brooks hit [laughs]. We got together and sang some songs, Kristy was there, it was just a fun night. 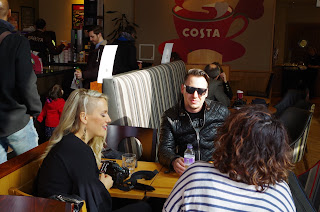 How did it feel when you first heard Love Is War on the radio?


Jon - Well I knew it was going to happen and she didn't so we pulled over. A friend of ours by the name of Nate Deaton in San Jose California made it happen, put it on his radio station for us, he was one of the first people who had the record. She cried like a wee child.

What drew you to Love Is War as the debut track to release?


Kristy - Some friends of ours had written it and I heard it in a meeting and it just said so much that I feel like is so important. I feel like "Love Is War" vocally will re-define what war is, that's hopefully the future of what war is! Hopefully we get it down to instead of killing each other we are working things out in relationships. So I think that's what American Young, we do naturally, it's a relational band and so we're constantly talking about the conversation, the communication and the inter-dialogue between two people. I think it all starts there and if we improve that I think it will bring world peace!

Jon - She played it for me, she had heard it like she said, brought it to me, I loved the song. I knew we needed to make it ours, the song was a lot faster when we originally heard it, they wrote it a lot faster so we drove over to our co-producer's house, Lee Brice, who co-produces our records with me and Lee helped us come up with this incredible vocal harmony part and I wrote this guitar hook, I wrote that in the guitar actually on the way over there and when it all came together it was just really obvious that song was written for us. We tried to have our little spin on it, the record label got behind it and had Eric Welch film an amazing video on it. It was my first video actually, it was really exciting. Then we released it, did a radio tour, did a bunch of really awesome things all around the country and now we're here because of it.

What's been the hardest track for you to write?

Kristy - Yeah, I wrote a song on the record it's about my mum. One of my soul mate co-writers and I sat down to write...my mum got hit by a train when I was in high school but she survived it and it was really miraculous, watching her go through the healing process. I had not realised that as many songs as I'd written in Nashville, I had never talked about that situation. It was probably ten years of writing songs and using it to really dig deeper was therapeutic. That song has definitely done so much for my family, it brought up a lot of family history that I think we needed to talk about and so it really reunited my family which was awesome.

You've previously released an EP, can we expect to hear a full release from you soon?


Jon - Yes, you can actually here the full release right now that we're not supposed to talk about on Spotify....[pauses] we're not really calling it a full release, there's twelve new songs on Spotify, we have our own channel, it's on Hot Country and Wild Country and there's some really fun new songs that really poke at the evolution of what we've done over four years and where we're going so check that out.

This is your first UK tour, do you plan to make the UK a regular stop? 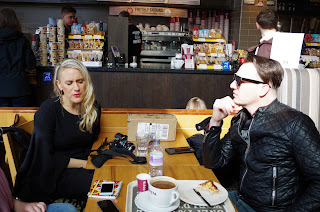 Jon - It depends how this goes! [laughs]

Kristy - We'll be here every year. This time, same time next year. I love it here, I'm excited about the response to country music that I've seen in a day in London. I had no idea that it was as popular over here as it is. There's real fans that know us and know the music, it's awesome! It's been great.

What prompted the decision for you to come and play over here?


Kristy - This is actually our number one market!

Jon - Well the decision to come over here and play was actually...a friend of ours by the name of Sasha McVeigh asked us to come and tour with her so we decided to do that then all these opportunities started to pop up, and then our record label got behind it, they decided they're going to release "Love Is War" to radio out here April 22nd, so that's kind of the decision that led us to come over here. Like I said, once we decided we were going to make a go of it out here and tour the UK and other parts of Europe a lot of opportunities really just opened up and started to present themselves. We were more than humbled and gratified to take part. It's awesome to be over here!

If you could only listen to one album, which would you pick?

Kristy - I would say the Mozart Requiem....you know what, that Keith Whitley record is probably one of my most played all time favourite...I don't know, it's a classic...

Jon - Which Keith Whitley record? Think of the albums that you listen to and then say that one [laughs] All time, favourite album.

Kristy - Probably the Sound Of Music then is my most played record.

Jon - I would probably say Deana Carter "Did I Shave My Legs For This?" or Faith Hill "Wild One".

Kristy - No....you know what? the first Whitney Houston record was pretty unbelievable, I think it was "I Wanna Dance With Somebody"...I don't know, I'm going to go back to the Mozart Requiem, that's my favourite, I'm going to go with that.

Which song do you wish you'd written and why?


Kristy - "Imagine" because it's the greatest song of all time.

Jon - You know what, this is a tough question because I think that songs have their own souls and I don't think that I wish I would have written any of them because if I would have written a song like "Desperado" or some of my favourite songs I would have missed out on the feeling that that song gave me as I listened. So I don't think...I have my favourite songs, I don't know that I have a song that I didn't write that I wish I'd written.


Thank you so much to Jon and Kristy for their time! I had a lot of fun chatting to them and I would definitely recommend seeing them live if you're able to make it to a show whilst they're over here! You can find all their upcoming tour dates on their website here and you can read my thoughts on their debut pop-up stage performance at Country To Country Festival here.