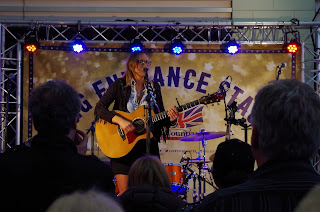 British native country singer-songwriter Emma Stevens is currently working on her third full-length studio album after previously releasing four EPs and two albums. Having previously toured with bands such as The Kooks, Emma is now making a name for herself as a solo artist.

I was able to catch up with Emma shortly after her final pop-up stage set at this year's Country To Country Festival and ask her some questions....

What originally made you want to play the guitar and banjo?

Well my mum used to play a nylon string to me when I was about two and so watching my mum really inspired me to want to pick up the guitar and then I just found that music was my thing. I then went on to play a bit of classical piano and cello and did my grades on that just to kind of get a bit of theoretical grounding. Then following on from that it was just really becoming obsessed with string instruments and country music. I watched The Dixie Chicks playing banjo and just fell in love. So for me it was like banjo, mandolin, got to get them all down or try [laughs].

When did you receive your first guitar?


I stole my mum's second nylon string probably at about fourteen. I've had a few friends letting me borrow guitars but for me it was at about thirteen or fourteen that I first got my own.

What made you ultimately decide to learn so many instruments?


Just my passion for the sound of them! And also, I try and play everything on the albums myself and for me that was quite important because I like putting together an arrangement of different sounds so for me I'm like 'oh I can hear a banjo part there I better learn it, I better teach myself it'. I just find it fun and every time I pick up a new instrument I get more inspired to play something different that I might not usually, that kind of helps the creative flow.

You've toured alongside various artists and groups in the past, what prompted you to move from that to your own career?


I kind of just realised that life is too short. I wrote a lot, I still love writing songs and I just never really had the confidence in my own abilities to go out there as my own entity as an artist. It was a real learning curve for me and actually it took loosing my mum to realise that you just never know when you're going to go and if you love something and you love performing but there's one thing interfering and that's the confidence then get rid of that feeling! Try and face it if you can't, do whatever you can to let your dreams come true.

You've released four EPs and two albums now, how do you feel you've developed as an artist since your first release?


I think my voice has really become different. I was listening to some of my songs on the 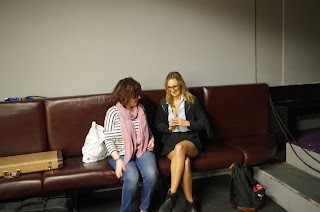 first EP and thinking 'wow my voice sounds really different then to how it does now' and I think because I never started out as a singer really, I was always playing and writing so I kind of had to learn the ropes in terms of singing and I'm still learning the ropes! [laughs]. It's an emotion, it really is. I feel like the writing has kind of evolved a bit and this album that I'm working on now, which is my third album, my goodness I feel like I'm really coming alive with the music now. I'm taking it in a slightly different direction but I'm keeping it really organic and rootsy and it's just really exciting where I am in my life at different points, how it comes out in the music.

What is your favourite track to perform live?


To perform live? It changes every time! A track that I enjoy playing is "Gold Rush" and I never thought I'd say that because it's also the hardest song. It's full of crazy stabs and riffs but I've really been enjoying playing that live, today at Country To Country - and a song called "Never Gonna Change" as well, I like playing that one. An important song for me to play is always "Sunflower" which is a song I wrote about my mum because it's sort of very reflective of how I felt at that time. I think music's amazing because it brings people together and it's amazing the stories that you hear from people, you've bared your soul and your heart to the audience and people will come and tell you stories and I think that's a lovely thing.

Which was the first song you've ever written?


Ah wow oh my gosh...I don't even think I want to remember the first song I've ever written! Tricky, it's a hard one to remember. I think I've just completely blanked it out! I came up with some different guitar parts, a lot of them were very punk....who knows....anyway I've definitely progressed somewhat from punk [laughs] But yeah, I have no idea, I can't remember.

Are there any plans in the works for new music?


Yeah! I've almost finished writing the next album. I've got the concept vaguely there, I just need to record it. I've got a couple of different musicians that I want to get in this time because, as I said earlier, I've been very proud about playing everything on it and I feel like now I'm ready to share the joy a bit and bring in people that are real masters of their instruments, bring them in and share that and learn from them. We'll see but I'm very very excited about this next album and I think so far the writing has been a joy and I haven't had any days where I've thought 'oh my gosh I'm never going to get this album out'. They say it's the hardest second album so hopefully it's all down hill from here! [laughs]

How do you know when a song is 'ready' and you should step away from it?


Once it's recorded there's no going back! It's hard actually, I'm still tweaking songs that I think were finished. I think you have to kind of say at a certain point you've got to stop editing it now, it's getting silly. Generally once I've finished recording a song, unless it's really not how I want it when I listen back to it, I think I'm going to put that to bed now, let it be what it is. If it changes any more it'd be a different song all together.


My vocal coach told me something that I always take with me. I'm very self-critical and I always worry 'are people going to like this? Am I going to sing really bad today?' There's just these things that go round in your head and she said 'it's about the song, it's not about you so when you're delivering a song it doesn't really matter if you're a bit...as long as you're delivering a song to people that they can feel something from that's the most important thing'. So that really helped me in terms of my development as a performer because I stopped thinking about how my performance was and more about how's the song touching people and yeah, that was some great advice.


Thank you to Emma for her time! Keep an eye out for her third album, I'd definitely suggest catching a live show from Emma, you can see her at various gigs throughout the UK. More details can be found on her website here.