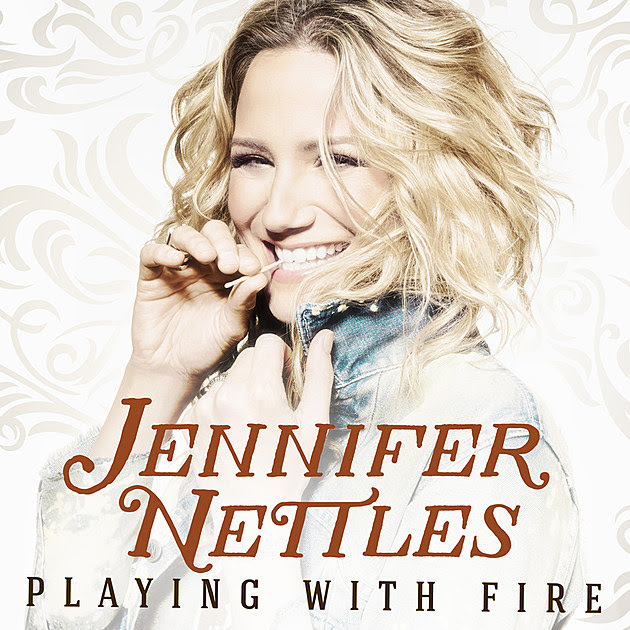 Playing With Fire is the second solo album with country music singer-songwriter Jennifer Nettles. Released on May 13th, the album sees more of an atypical 'Sugarland sound' than that which was showcased in Jennifer's first release.

I have been a fan of Sugarland for years so it was great to hear songs like Sugar, Hey Heartbreak and Unlove You on this release, each of which conjures up that distinct sound. Sugar has actually quickly become one of my favourite songs, it feels like a great summery song to turn up loud and sing along to. The echoes of reggae within the instrumentalisation work really well and the fact that it almost feels as though you can hear Jennifer smile at various points really sells the track as a whole.

It is certainly interesting to see Brandy Clark's name appear quite so often in the song-writing credits. Nowhere is Brandy's influence more evident than in Drunk In Heels. Immediately making you think of Brandy's own track Stripes, the format of the track actually really suits Jennifer, seeing her produce an attitude filled vocal that controls a song that focuses around "when we get drunk, we do it in heels" as well as including some other great lines. It's a great track that I'm sure is going to be very popular with a lot of people, it'll be interesting to see if this becomes a single at a later date.

One thing I would never have expected to be mentioning in a review of a Jennifer Nettles album is her cover of a Holly Williams song. Three Days In Bed has a slightly heavier production than Holly's original and I would say, whilst Jennifer's version is pleasantly surprising, the track seems to lose some of the rawness with the addition of the extra instrumentalisation - particularly the electric guitar feels a little unneeded. Definitely a brave song choice that does pay off but, in my opinion, there are stronger tracks on the album.

There are a few songs here that see Jennifer channel the musical theatre influences from her time in Chicago, particularly Starting Over and Stupid Girl. I quite like Stupid Girl but it does, unfortunately, feel like Starting Over is missing something to make it really stand out. It's a shame as lyrically it's very touching but, as a listener, you don't really feel the emotion in the track as much as you do in other tracks like Unlove You or Salvation Works. The same can also be said for R&B influenced Chaser. The general production often feels too heavy and, whilst Jennifer's first solo album was more R&B, Chaser feels a little out of place here.

The real gem here is Salvation Works. Whilst the track isn't the only ballad on the album, it becomes a goose bump moment as Jennifer delivers a really emotive vocal that manages to create a delicate strength, such that you as a listener feel almost embraced by the track. The chorus is finished by my favourite lines of the whole album, "every sinner has a future and every saint has a past" and the song-writers shine throughout a track that sees Jennifer and Brandy joined by Lori McKenna. Really gorgeous track.

Jennifer has one of the most recognisable voices in modern country music and with songs like Sugar and Salvation Works, yet again proves that she can deliver great poppy, upbeat numbers as well as great slower, stripped back numbers. Whilst Playing With Fire isn't a perfect album it is, in my opinion, a lot better than That Girl. Definitely worth listening to if you are a fan of Sugarland, Playing With Fire sees (mostly) a return to where Jennifer is at her strongest.
Email Post
Labels: Jennifer Nettles "Playing With Fire"