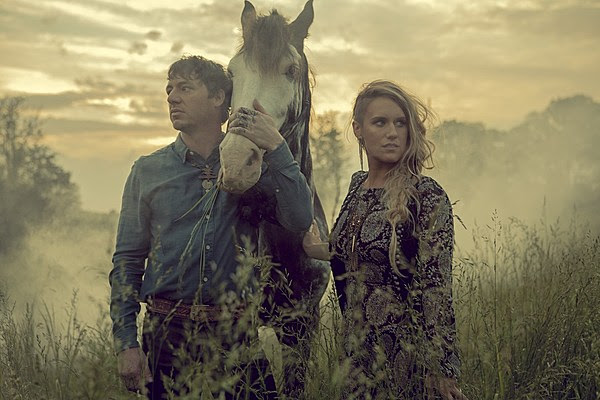 Jon Stone and Kristy Osmunson form country duo American Young. The duo released their debut full length album on 5th August - you can read my review here if you haven't already. I was able to catch up with Jon and Kristy a few days before the release of their album to ask them some questions....

You're set to release your debut full length album, do you find it all came together easily?


Jon - Well it came together the way it should, let's put it that way.

It's great to see Be Here released as a UK single, what prompted you to pick that song over the others on the album?


Kristy - That was our record label. You know, when we turned in this project we kind of felt like it was a cohesive body of work, one of those where we kind of pride ourselves on the whole album itself. It's definitely one you've got to take in however it organically appears to you. We really are proud of the record so the song choices and all of that, we felt like they would show themselves in the right time and Curb got excited about "Be Here" and we had a friend of ours out in LA do a mix on it and it kind of organically happened.

Jon - We even got it tattooed on us! [laughs]

How would you describe this album to new listeners?


Jon - Well we hope that they buy it and describe it themselves! [laughs] I think what it is, it speaks of Kristy and I together and the team and it really speaks about our journey and what we've been going through in the music business and I think our journey though the human experience. I think that's a very eloquent way to put this body of work.

Which track was the most fun to record?


Kristy - You know actually I personally thought "Hometown Girl", it's one of my favourite tracks, it's just the fills in the middle of it I really love. We cut the strings in the middle of the night at Jon's apartment. It was just a beautiful, wonderful experience and us hoping that we weren't annoying the neighbours. He has very kind neighbours! I think this album is a testament to Lee Brice as a producer as well. This was his first - if I'm not mistaken - other than his record, first time to put out a production with his name on it on a major label and you know what? it's brilliant. He has such perspective that no-one else in our world could because we have such a history with him, he knows Jon so well and he knows me so well and I'd like to say he's kind of a conduit. He's a really really balanced, very broad stroke perspective on music and the industry and the whole approach to it.

Point Of View in particular is a brilliantly funny track, how was that track born?


Kristy - It was so funny because I had a little ukulele and was just playing a little uke part and then our drummer started playing the percussion on his stomach. He's a big dude [laughs] ... like he has a broad bass shall we say. He was just putting out the percussion on I was just like man that smells like bacon and eggs and a whole lot of them! It was great. It was fun! It was all just very natural. We kind of like to just stay in the moment and cut as organically as possible.

Jon - By the way, you aren't the only ones that don't know what bacon and eggs means!

Between the two of you you've had a hand it writing all but one of the tracks on the album, how do you get your ideas for the tracks?

Jon - I don't know, I think that we had probably forty songs for this record and we narrowed it down to the best songs that fit us, fit our brand and fit the sound. That fit what we wanted to say and were the strongest songs...then we created what we were shooting for.

These songs have been available on Spotify and with a few YouTube videos for a while, has there been any track in particular that fans have really connected with?

Kristy - We get "Point Of View" a lot...people are really putting themselves in that song. You know that's when it's real, you don't really have to promote it, you just put it out and it kind of finds it way and that's what we feel "Point Of View" has done so we're excited about that one.

Lee's voice works really well alongside both of yours in Eighteen, can we expect to see collaborations with other artists in the future?


Kristy - That's the best part of the community in Nashville and what we do. We write with other artists...Hayley Georgia, she's on Warner Brothers and wrote "Hometown Girl" with us so yeah, we like to collaborate.

The last time we spoke you were very keen to return to the UK regularly and you'll be back here later this month , how has the response from UK fans been?


Kristy - You know it's been really great. You guys are my favourite on-line, on Facebook so if we don't know you come to americanyoung.com and our Facebook. I can literally hear the accent through the phone [laughs].

Thanks to Jon and Kristy for their time! Make sure you pick up a copy of their brilliant new album AY and see them live if you can! (tour dates are listed on their website here).
Email Post
Labels: American Young interview