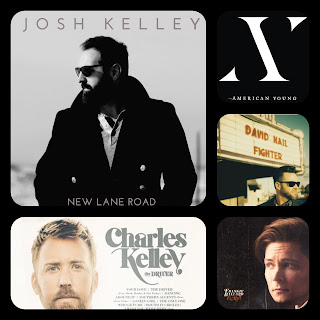 Kasey's picks - An album of the year can mean a lot of things to a lot of different people but for me it is an album that showcases the artist at their strongest whilst being supported by an impressive overall musical package. Alongside this, any album of the year should in my opinion really connect with the listener and simply make you want to hear each of the tracks included on any particular release again and again. Each of these brilliant albums does just that. I have found myself drawn to each of them and would, without a doubt, recommend any of them.


A promising solo debut from one third of hit country group Lady Antebellum, Charles Kelley's "The Driver" sets a high standard. The overall sound is one that fans of Lady A will recognise however there is space here for the edge to Charles' tone to be explored further. Holding three strong collaborations as well, the album showcases Charles as a solo artist and doesn't disappoint.

One of the rockier albums to come out of country music this year, "El Rio" is Frankie Ballard's second album and interestingly shows a distinct progression since his first release. With an overall sound that toes that line between soft rock and country, "El Rio" has considerable strength behind it. The softer side of Frankie's vocal is also brought out at moments and offers a different side to a generally compelling, listenable album.

His fourth studio album, "Fighter" is without a doubt David Nail's strongest release to date. David really began to highlight collaborations with his previous studio release and this is built upon here with a lot of success. The album also feels incredibly personal to David, tracks like the touchingly emotive "Fighter" and heartfelt "Old Man Symphony" highlighting him as both a singer and song-writer. A brilliant album from one of the most under-rated male artists within country music.

Kristy Osmunson and Jon Stone have produced a real gem with the release of their debut album. Their storytelling is on point, their vocals blend very well together and the overall production of each track manages to be both well thought through without sounding overproduced. It is clear that Jon and Kristy complement each other well - with their relationship shining through on tracks like the tongue-in-cheek "Point Of View" - and have released a very strong album that promises a lot for future releases.

One of the earliest releases this year but undoubtedly the strongest, Josh Kelley shines throughout his first album in five years. From the album's gorgeous opening track "It's Your Move" right through to the powerful closing number "Only God Can Stop Her Now", Josh's commanding vocal has a gritty edge that is showcased incredibly well throughout the whole release. The fact that Josh has written each track here really works in his favour to create a cohesive album whilst still pushing boundaries and expectations with some overall style choices. "New Lane Road" is simply, at it's core, an album that deserves to be at the forefront of this year's releases. 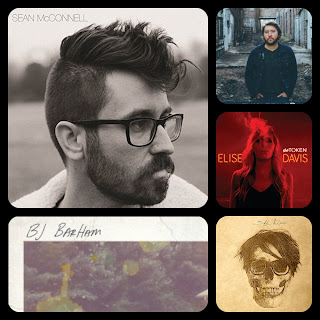 Tara's picks - As always, for me, a great album is one that stirs something deep and moves me emotionally; reaching in and drawing out feelings whether it's pure joy, big crocodile tears or something in between. Like last year, I listened to my fair share of albums, both for review and pleasure; so in order to narrow down the pool,  there were no live albums, EPs, reissues, or compilations  included in this  list. The albums you find below all had that special something that drew me to listen to them consistently and repeatedly.

While Barham's songs for American Aquarium have always been personal and genuine - readily connecting with the listener - those traits have never been felt more strongly than on his solo effort which was released in August. "Rockingham" paints a picture of home - North Carolina, but really anywhere in small town USA - in substantive snapshots of the lives of the everyman and woman who reside (and try to get by) there with a dark realism, emotional depth, and  authenticity that's unmatched.  Fave tracks: "O' Lover", "Unfortunate Kind"

Not your average choice for an Americana/alt-country/country blog but hell,  Walker's album is killer; lyric-driven pop/rock that's overflowing with infectious hooks, boundless energy and  emotional ballads, including one with Ashley Monroe. Fave tracks: "Irish Exit", "Can We Just Not Talk About Tonight"

Released in September, Davis' "The Token" is a painstakingly honest look at the female struggles intertwining love, relationships, and commitment that, imbued with the matrix of emotions that often accompany those things, makes for a record that captures something raw, real and responsive that often hits too close to home.  Fave tracks:  "Pretty Girl", "I Go To Bars and Get Drunk"

Another accomplished songwriter, Beaver's May release, anchored by the hopeful resilience of “Dark” and the melancholy nostalgia and idealism of “If I Had A Horse,” is a collection of songs that are lyrically and sonically compelling, interesting, effective, and universally relatable.  Beaver, who co-wrote nine of the twelve tracks, brings insight to a myriad of emotions including sentimentality, innocence, and longing and merges them with a welcome, edgy frankness; successfully conveying sentiments to either male or female in “a-ha” moments that have you realising he nailed it.  Fave tracks:  "Rum and Roses", "Gravedigger"

The accomplished tunesmith (who has written too-numerous-to-count songs which others recorded) released his self-titled Rounder debut in July. The immaculately produced ten-song collection immerses the listener in McConnell’s honest, emotional songwriting and understated, flawless vocals on an album replete with poignant lyrics and unforgettable melodies that leave you with a palpable sense of McConnell’s gratefulness for the past, happiness with the present, and anticipation for the future. Although the incredibly moving stories are his, they are utterly identifiable and absolutely resonate. Fave tracks:  "Running Under Water",  "Beautiful Rose"

So there you have it! There are the ten albums that Tara and I feel truly deserve to be albums of the year. We hope you have enjoyed these albums throughout 2016 and would love to know your thoughts!