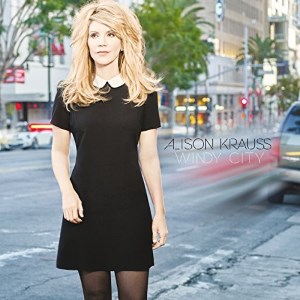 Alison Krauss is a name that is undoubtedly familiar to fans of both bluegrass and country music as a whole and many fans of music generally however the same can not necessarily be said about the tracks she covers on her latest release Windy City. Holding ten covers of classic country tracks hand-picked by Alison and the album's producer Buddy Cannon, Windy City's February 17th release marks the first album of solo music released by Alison in almost 18 years.

With one of the most distinctive voices within country music Alison Krauss has regularly proved her talent through a career that has already spanned 30 years and Windy City is no exception. Whilst not an album for fans of a rockier country sound, there can be no doubt that Alison can comfortably stand alongside - and often best - her contemporaries.

Whilst Windy City is full of impressive covers it is All Alone Am I that really shines. Substantially slower than Brenda Lee's original release and with a distinctly sparser production line, the main instrumental lead here comes from a soft piano line and delicate string section. All Alone Am I offers nowhere to hide within the production but Alison proves that she doesn't need that, the softness behind her vocal delivery fits in perfectly with the rest of the track and the spine tingling emotion oozing marks the track as a stunning moment within the album.

Arguably one of the most recognisable songs on this release if you aren't overly knowledgeable about the more traditional sounds of country music is Alison's cover of Glen Campbell's Gentle On My Mind. Interestingly, the track has been covered around 300 times (a quick YouTube search yields some intriguing results!) but Alison's version of the classic track pays homage to the original whilst still employing little tweaks to make it her own. The delicacy behind Alison's vocal pairs well with the re-occurring patterns within the instrumentalisation and the inclusion of the male backing vocals in particular that, whilst sparing used, rounds out Gentle On My Mind and the overall thought that has gone into the track makes for a distinctly comfortable listening experience.

There is an intrinsic sound running throughout Windy City however songs like I Never Cared For You expand that through a pleasantly surprising Bossa nova influenced production. The catchy track is the shortest inclusion on the album but also certainly encourages listeners to listen to it multiple times. Further research into the lyrics behind the track actually reveal that there is a lot of repetition however that doesn't seem to matter here, the light and shade drawn from the song by the musicians and Alison herself crafts a sound that feels completely comfortable whilst also adding another dynamic to the overall album.


Whilst fans of a rockier, more upbeat style of country music may feel inclined to give this album a miss it would certainly be a shame not to listen to it at all. Throughout Windy City Alison Krauss proves that she deserves a place at the forefront of country/bluegrass music and I know this is an album I will be returning to regularly, a true talent that has released a very impressive album.