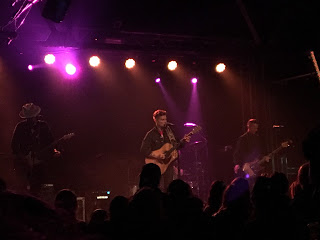 Tuesday night marked the second date of Frankie Ballard's UK tour in the intimate surroundings of Oxford's O2 Academy 2. It is not a venue I had been to before and as such was not sure what to expect but I can't fault the venue as a whole however the small but enthusiastic crowd definitely made it a different experience than if the venue had been full to capacity.

The support act for the evening (and in fact for Frankie's whole UK tour) was Bristol based folk/Americana duo Foreign Affairs. Taking the stage shortly after 8pm the brothers seemed a good fit to open for Frankie and I was pleasantly surprised by their overall performance in front of a crowd that quickly embraced them. Adam and Lawrence are both clearly talented musicians and delivered a confident set on their own leaving many new fans behind (as could be seen by the line to meet them afterwards!). The scattering of slower tracks within the set where the moments that made you really sit up and take notice, the vulnerability and overall delicacy working to the duo's advance to showcase anything dynamic within a set that was, for the largest part, largely rooted in folk rock.

Many readers will already know that Frankie is one of my favourite male country artists so I was both excited and intrigued to see what his headlining set would bring. A (slightly excessively long) boxing style announcement finished with Frankie and his band launching into first song of the evening Drinky Drink. One thing that really stuck out for me was the sizable amount of songs from Frankie's Sunshine & Whiskey album that were mixed in to the set list, it being really nice to finally be able to hear some favourites from that album live alongside the majority of the El Rio album (including favourites like Wasting Time and El Camino). 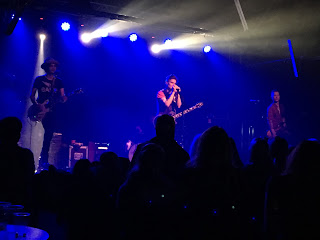 Frankie - the date decision may have hindered that - but the intimacy of what resulted actually worked in Frankie's favour. There can be no doubting the fact he is a very charismatic performer and seemed completely comfortable up on that stage, in turn making the audience comfortable and easily taking them with him through a set that lent more towards the songs themselves rather than interaction with the audience - although this didn't seem to bother the audience and the majority of them could be heard singing along throughout the set. He was however sometimes let down by the overall sound quality as the drum line tended to feel a little excessively loud on some of the rockier numbers. Given control of the set list itself there are certain songs I would have replaced but that is purely down to personal preference of songs I would have liked to hear!

Johnny Cash's Folsom Prison Blues and a short Elvis Presley medley made for pleasantly surprising additions to the generally hi octane set and whilst there are a lot of Frankie's rockier tracks that I really like, it was the slower, more stripped back numbers like It All Started With A Beer and You Could've Loved Me where Frankie really shone. Whilst there were a few instances within the rockier numbers where the production (and as I mentioned, in particular the drum line) became a little overpowering, the inclusion of the softer tracks meant the focus was completely on Frankie's distinctive vocal and he rose to the occasion, in particular during You Could've Loved Me where his emotive delivery made for a real stand out moment within the show. Perhaps someone can convince Frankie to bring an acoustic tour over here at some point!

Overall it was a great night with an opening act who I will certainly be keeping an eye on and a headliner who proved what a talent he is. Now comfortably into his third album cycle, Frankie continues to go from strength to strength and it looks like he plans to make the UK and Europe a regular tour stop as he builds upon his core European fan-base. If you go to one of his remaining shows over here you can expect to hear a performance rooted in the rockier side of his music highlighting slick musicianship, great songs and a charismatic performer with a strong and distinctive vocal, definitely an evening out I'd recommend. 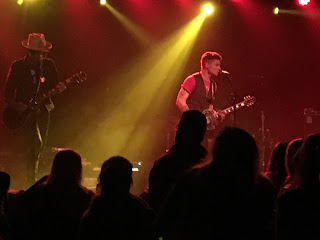 Credit to Jenny Coombs for the photos!
Email Post