A Night In Nashville, Norden Farm Centre for the Arts

Last night's A Night In Nashville show saw the return of Jenn Bostic and Sarah Darling alongside new addition to the 'in the round' style tour Michael Logen. Maidenhead's Norden Farm Centre for the Arts was the backdrop for the evening and this was the first time I'd been to the venue, which is possibly most easily comparable to Milton Keynes' The Stables. I was very impressed by the venue and will certainly be keeping an eye on their gig listing in an effort to return - the food was very tasty, the staff were very helpful and, whilst it began to feel like a bit of a squeeze as the start time for both A Night In Nashville and the separate show in the venue's smaller room approached, for a large part the foyer felt spacious and well organised. Last night's show was in the bigger room in the venue which comfortably fit a substantial (sold-out!) audience whilst still retaining the intimate feel that is so appealing with an 'in the round' style show. 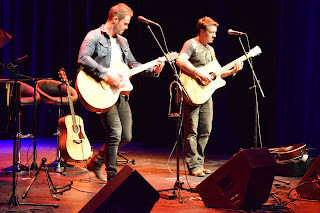 When the opening acts for the tour were first announced I was intrigued to see that there would be separate (local) openers for each night. Having listened to a few of Stewart Mac and Dean Roberts' songs before the show I knew they had some strong songs and were both talented vocalists but I wasn't expecting just quite how impressive they would be live. Stewart took lead vocals throughout their far too short set, with Dean providing backing vocals and the intricate guitar hooks behind the songs. The set-list showcased them at their strongest with catchy, sing-along numbers merging effortlessly with more thought-provoking songs, all grounded by some great guitar playing. The interaction between the two of them translated well and you could tell that by the end of the evening they left with a substantial number of new fans. Definitely one of the best opening acts I have seen in quite a while!

The anticipation was high by the time Sarah, Jenn and Michael took the stage after a short interval. Sarah kicked off the round with one of my favourite songs from her new album, Where Cowboys Ride. Her third of the evening primarily featured songs from her newest album and was delivered with her trademark ethereal sweetness. One of the best songs in Sarah's set was a song entitled More Issues Than Vogue which actually didn't make the cut for her latest release. The tongue-in-cheek nature of the song couldn't help but make you chuckle and it added another dynamic to Sarah's strong overall performance whilst still remaining a cohesive part of the set. 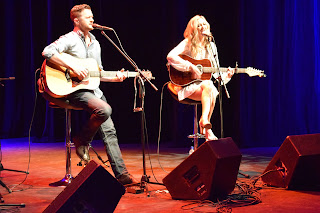 Michael's gritty tone and song-writing talent was a welcome addition to the line-up for the night, his deep vocal also complimenting Jenn and Sarah well. A relatively unknown quantity from my point of view before the show, I had the pleasure of interviewing him shortly before the tour began and had actually requested a rendition of a song he co-wrote with Will Hoge, Goodnight/Goodbye. This song featured towards the end of Michael's set and whilst at it's core is a fairly sad track, Michael made the track his own through a few subtle changes and delivered a distinctly compelling version. Michael is certainly an artist that I will be keeping an eye on, songs such as Human After All highlighting him as a force to be reckoned with. 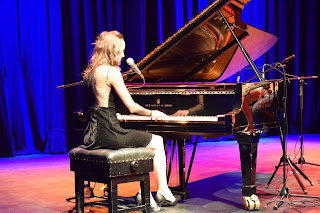 Jenn took her place in front of a Steinway piano and opened with a song that I had requested from her. Change was actually the first song of hers I had listened to and it was great to hear the gutsy song live, Jenn's powerful vocal taking centre stage. A few songs into her set Jenn introduced one of her most heartfelt, emotive tracks Jealous Of The Angels. An incredibly personal song to Jenn, the emotion oozed from her voice as many of the audience (including me) were left with tears in their eyes. Whilst Jenn was clearly very comfortable sat at the piano and played the instrument for the majority of her set, it was great to see her break away from that to pick up an acoustic guitar and play the infectious Hollywood, even managing to convince an increasingly more willing audience to sing along.

The trio closed the impressive show with an acoustic cover of Dolly Parton's Jolene as they stepped forward to the front of the stage and sang with the only accompaniment coming from Michael's acoustic guitar. The timeless hit was given a new lease of life as the trio supported each other through individual solo verses and then came together with slick harmonies in the choruses. A brilliant performance to round out an incredibly impressive evening. 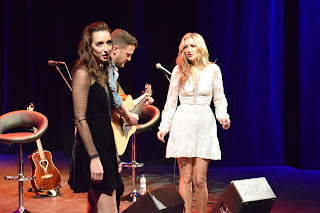 Credit to Dragon Photography for the photos!