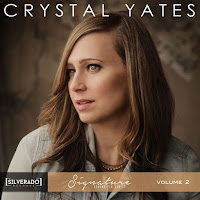 Following up on January's release of Volume 1 of their Signature Songwriter Series, May 12th saw Silverado Records release Volume 2 of the series, this time featuring Crystal Yates. The five song EP is unfortunately ultimately a little frustrating as there are glimmers of a compelling talent throughout but it falls short of what it could be.

Raining In Amarillo is without a doubt the strongest track in the release. The combination of influences from blues and traditional country is, for the most part, very successful however Crystal's tone does unfortunately feel a little strained as the track builds which takes away from the soft, soulful atmosphere that is built at the start of the song. Whilst that - alongside the fact that the lyrics feel a little repetitive after a while - takes the shine off the overall track, Raining In Amarillo is still a strong song at it's core and offers an intriguing insight into Crystal's distinctive tone.

Cementing the idea that Crystal is at her best during the softer, more emotive tracks, Fall In Love Again is also another strong part of this EP. Sadly the continuous heartbeat style percussion line is completely unnecessary and becomes a little grating fairly quickly. It is a distinctive and almost overpowering part of the track however the rest of Fall In Love Again is an emotive, heartfelt ode to love. Overall it is quite slow and sombre so it's probably not one to listen to out of context of the rest of the EP however Crystal delivers the song with a compelling tenderness that is easy to embrace.

EP closer As Long As I'm Behavin' tries to build upon the bluesy feel of previous tracks with the introduction of a rockier production but it ultimately feels a little forgettable. Considerably shorter than the other songs on the EP, it's clear what As Long As I'm Behavin' has tried to do but it ultimately falls short, lacking the depth to really draw a listener in and make them want to come back for more.

The latest Silverado Signature Songwriter Series isn't a bad release it just feels like a lot more could have been done. An intriguing introduction to Crystal Yates for people who haven't heard her name before, the EP falls short of really showcasing her at her best, leaving listeners ultimately feeling a little frustrated as the vocal promise is certainly there. It's hard to really put your finger on what went wrong here but Crystal is still an artist I will be keeping an eye on to see how she develops through future releases.
Email Post
Labels: Crystal Yates "Silverado Signature Songwriter Series Vol. 2"