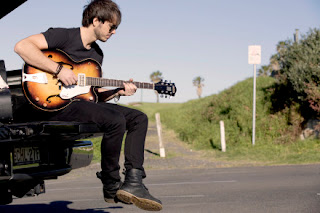 Morgan Evans is fast making a name for himself and growing a sizable dedicated fan-base. The Australian native released his debut album in 2014 and has subsequently relocated to Nashville since then to begin to craft his second release within the Nashville music community. I was able to catch up with Morgan shortly after the start of his current UK tour to ask him some questions....

What first made you decide you wanted to be part of country music?

I'm not sure it was a real choice that I made! I grew up listening to my parent's music - it had a whole load of country music in it - I played in a whole bunch of bands and all those kind of things and everything I did ended up sounding country! [laughs] I guess that's why I ended up playing country music and so the more I played it and the more I travelled around playing it the more people I met and sort of realised that the community around the genre - which I guess is what you mean by being involved in country music and being a part of country music - so yeah, it wasn't a musical choice but I'm really glad it worked out that way.

Who would you describe as your musical influences?

Certainly from those days I grew up listening to Garth Brooks and some Australian country music too like Lee Kernaghan and John Williamson and other big albums around the house were The Nitty Gritty Dirt Band. There was also a lot of 70's rock and roll in there as well, [laughs] a lot of Credence Clearwater Revival, Led Zeppelin and Meatloaf. So that's sort of where it came from and now, I listen to all kinds of music now because I can actually make a choice rather than being in the back seat listening to my parent's music! [laughs] My favourite artists out at the moment...Keith Urban's obviously been a big influence on me and other guys from here too, Ed Sheeran and James Bay, I think the music they're making is really inspiring and John Mayer as well is another favourite of mine.

You've already toured with a wide variety of country music artists, if you could pick any tour to be a part of what would it be?

I think it's got to be one that I'd want to watch every night because that's a big part of it! I think touring with someone like Keith Urban would be a big one because I would literally sit there on the side of the stage every night and watch every single second! [laughs] I saw Ed Sheeran headlined Glastonbury last night, I saw him on the TV - I wasn't there - that was an incredible show, I'd love to do something with him. There are so many artists that I could say that about but pretty much the whole list that I just named for you before! You can just put them in the answer to the second one as well.

How did your upbringing in Australia ultimately lead you to Nashville?

The first time I left there I won a national competition and the prize was to go to Nashville and record a single and release it in Australia. That was the first time I went to Nashville and I remember getting there and it was like a light-bulb moment, like 'hang on, this is where it all happens'! Over the course of the next few years I started travelling back and forth, putting out more music in Australia and eventually a couple of years ago I just bit the bullet and thought okay, I'm going to go over there and live and try to make music with the people who are the best at it.

You wrote all but one of the tracks on your debut album, did you find it was hard to be quite so involved lyrically?

No, I grew up playing music and I started writing songs because I wanted to play, I didn't actually think about writing songs as a separate craft, I just thought you had to write songs to be able to play! So I always wrote all my own songs and actually it was a harder transition to start writing with other people than it was to start cutting other people's songs. I learned so much through that whole co-writing period and I think one of the things I learned was I want to be singing and saying things that I want to say and that means that I have to write a song. I really love that part of the process and I want to keep heavily involved in that.

Is there a certain process you go to when songwriting or is it whatever suits the time?

I think the only thing that's constant is a feeling - and whether that comes from the music that you're playing or something that's happened to you in your life or just a word that you've heard - if I've got a certain feeling about something I'll sit down and I'll start playing until I'm there. I'll rarely sit down and go 'hey I'm going to write a song' and try to write something out of nothing. [laughs] There needs to be some sort of inspiration for something. I think people hear a lot about the Nashville song-writing way and how they just go into a room at 11 o'clock and they come out with a song that's inspired. I'll walk into one of those sessions and I'll have five inspired ideas from other parts of my life that I'll save and I'll take into those sessions. I try to start everything with some sort of inspiration, whether it's musical or lyrical or just a feeling, it can come from any of those places.

Which song do you wish you'd written and why?

I really wish I'd written Mariah Carey "All I Want For Christmas Is You"! That's like one of the greatest songs of all time. [laughs] You listen to it every single year! It goes out of fashion every year but it comes back every year too. Music for me is such a state changing thing, I know a lot of people like to write sad songs, a lot of people like to write happy songs because they're in those states. Quite often if I'm down I'll try to write a happy song and try to lift myself up and I feel like that's one of those songs that always makes me smile.

It's been three years since your debut album was released, what can we expect from the follow-up?

Well, a lot's happened in those three years! There's a lot of inspiration to draw from - it was a big deal for me moving to the other side of the world, from Australia to Nashville so there's a lot of different feelings that went through that time, leaving my family and friends behind and then I met a new girl, an American girl and we're engaged now so there's a lot to write about there as well! I left my band behind in Australia and all the musical inspiration for this next record has come from me sitting in a room with an acoustic guitar. It'll be a different sound and it'll be about a whole bunch of different things but it'll still be me singing. I'm excited for everyone to hear it, I think it'll be quite different to the first one but it'll be the first thing that people in the UK and people in the US hear, it's the first one to be released all over the world - I feel really good about it being the first thing that the rest of the world hears.

Do you have any idea when we can expect to hear anything from it?

The first single will be out here on 21st July, it's a song called "Kiss Somebody" and the rest of the album we don't have a date for but it'll likely be next year some time. We'll get some more music out before then but the full album will probably wait until next year.

This is your first time over in the UK, how have the audiences so far embraced your music?

Yes it is my first time! We played in Manchester the other night at the Buckle & Boots Festival and it was crazy! I can't imagine that many of those people in the audience would have known who I was or any of my music but from the first note that I played, everyone was just in and it was a party - I had the best time! I feel like it's a little bit like in Australia here where there's not as much country music as the country music fans want so when people come from other countries to come and play for them they really appreciate it. I watched that happen in Australia all the time and I definitely felt that happen in Manchester the other night. It's the only show that I've played, I'm in Scotland tonight and in England the next two nights after that so I'll be able to give you a better idea after that but my first experience was nothing short of awesome.

Can we expect to see you make the UK and Europe as a whole a regular tour destination?

That's what I want to do! Absolutely, if you guys will have me back I'll be back! [laughs] I do love it hear and hopefully I can make it somewhere that I can come back to often.

Where would you like to see the future take you?

The future hopefully will take me...just to playing more music! I love making music and I love sharing that moment of playing that music with people and connecting with people in that way. Like in Manchester the other night on stage - whether there's a hundred people or a couple of thousand people it's the feeling I look for and hopefully I can have a whole bunch more of those!

Thank you to Morgan for his time! He has two remaining UK tour dates (which you can find on his website here) and make sure to keep an eye out for upcoming new music!