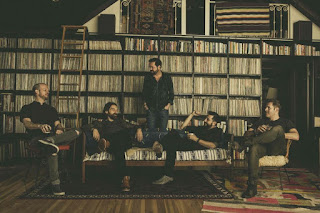 Released on August 25th, Happy Endings is country group Old Dominion's second studio album. Introduced with the release of lead single No Such Thing As A Broken Heart in March, the album holds twelve songs each co-written by various members of the band. Having now listened for a while I've found Happy Endings as a whole to be a bit of a mixed bag in terms of the overall strength of each track. The strongest tracks from this album could arguably make an impressive EP but I haven't yet been entirely convinced that Happy Endings itself really shines.

The only collaboration on the album comes in the form of Stars In The City alongside Little Big Town. The quartet have long been known for their slick harmonies and they bring that to this track, working well alongside Old Dominion lead singer Matthew Ramsey's distinctive tone. Another showcase of strong song-writing, Stars In The City is one of the longest tracks on the album but actually feels like it's over far too quickly (I've had it playing on repeat a lot). A brilliant track from start to finish!

Shoe Shopping is an intriguing title but the song behind it is undoubtedly a strong addition to the album. Merging the catchiness of tracks like No Such Thing As A Broken Heart alongside the bluesiness of tracks like Written In The Sand, Shoe Shopping will leave you tapping your feet along to the solid drum beat as well as appreciating the overall 'smoothness' of the sound. An incredibly clever song, lines like "I could go good with your eyes" reinforce the image of - quite literally - shoe shopping and the song as a whole showcases the band really well.

Fans of Old Dominion may recognise the lyrical idea behind Written In The Sand as it's very similar to Half Empty from their first album - as Half Empty was one of my favourite tracks from that album the comparison  between the two doesn't bother me but it may frustrate some listeners. The smooth, almost bluesy styling to the track works well but it does feel like Written In The Sand could have been a lot more than what it actually ends up being. It's quite a short track and it's highly repetitive which, whilst I quite liked the track, it did leave me wanting more, especially compared to some of the other tracks on the album.

There seems to be an odd effect on some of the vocals and instrumentalisation during A Girl Is A Gun that feels a little grating upon listening and unfortunately this means the track isn't one I'll readily be returning to. Intrinsically the song isn't actually that bad which makes it all the more frustrating because removing the odd effect would have made it a lot more listenable. Sometimes a repetitive song works fine if all the other aspects come together well but that's not the case in this instance, with the lyrics ultimately feeling a little awkward and leaving you wanting the song to travel and grow more than it actually does.

Whilst I wasn't particularly drawn to some of the tracks showcased in this release, there was only one track that I really didn't like. Can't Get You unfortunately just sounds messy and uncomfortable, which is a shame considering it's the last track on the album and is the lasting impression that listeners will be left with. It sounds slightly like the live recording hasn't helped the overall sound (leaving you wondering why the group didn't just release a studio recording of it). It ultimately just feels like a bit of a disappointment, Can't Get You is nowhere showing Old Dominion at their strongest and usually sees me skipping past the track fairly quickly.


I'm sure Old Dominion will find many fans who have been drawn in to this album as a whole but ultimately I will probably find myself returning to the smaller selection of tracks that really grabbed me. Whilst tracks like Stars In The City and No Such Thing As A Broken Heart are arguably some of the best that the group have released, the overall listening experience is let down by some of the decisions made during the creation of various other tracks. It'll be interesting to hear what subsequent releases from Old Dominion bring as they are clearly settling into their sound now and are certainly strong song-writers.
Email Post
Labels: Old Dominion "Happy Endings"