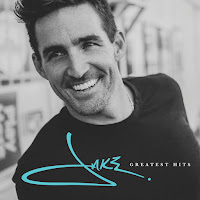 Set for release on 24th November, Jake Owen's Greatest Hits album showcases some of the hits from his career so far. Featuring all six of his number one singles (Barefoot Blue Jean Night, Alone With You, The One That Got Away, Anywhere With You, Beachin' and American Country Love Song) alongside some 'fan favourite' tracks and two new songs, Jake's Greatest Hits album is probably not one for staunch fans of his (who will most likely have already heard the majority of these tracks) but is certainly a strong introduction to him as an artist and to the wider country music genre as a whole.

Whilst it only peaked at number 14 on the charts, What We Ain't Got has long been one of my favourite tracks of Jake's and it's great to see it included here. Featuring backing vocals from Sarah Buxton (who many may recognise from appearances on David Nail's and Martina McBride's latest albums amongst others), the piano led track offers Jake's distinctive tone the opportunity to really shine, leaving listeners with a vulnerable, emotive performance that proves the talent behind Jake's vocal. Sarah's vocals blend perfectly with Jake's and the two float smoothly over the understated instrumentalisation to create a really gorgeous moment that I personally could quite happily listen to time and time again.

Neither of the two new tracks here (Subliminal Love and Long As You're In It) are poor tracks but equally, it feels like they don't stand up to some of Jake's previous releases. It is also incredibly frustrating for long time fans of an artist to see a Greatest Hits album released with a few new songs on it as, if they want to hear the new tracks, they have no option other than to just download them (and thereby not have the CD) or buy a whole album of songs they already have just to own a couple of new tracks so, arguably, Jake would have been better waiting for his next full release to debut these songs. Out of the two I'd probably say the overall sound of Subliminal Love is the stronger. Both are quite different in their styling but the soft reggae production of Subliminal Love works really well and, even though the song feels quite repetitive which takes some of the shine away, Jake sounds very comfortable within the style.

The album is set out chronologically and you can definitely hear a progression in Jake's sound - at it's starkest between tracks one to three and the rest of the album. I've followed Jake's music for around six years and, as such, missed his first two albums so it's certainly interesting to hear these first three tracks! Yee Haw and Eight Second Ride feel a little too messy to me but Don't Think I Can't Love You is definitely a strong track. The smooth waltz styling to the track works surprisingly well and, whilst it's not as impressive as tracks like What We Ain't Got, Heaven and The Journey Of Your Life, you can definitely hear where his talent for the slower, more heartfelt tracks was built from.

It certainly seems as though you can't think about a Jake Owen Greatest Hits album without thinking about Barefoot Blue Jean Night. Even now the track remains a brilliant song to turn up loud and enjoy, with it's catchy melody and 'good-time' feel. The chorus backing vocals encourage you to sing along to a song that manages to be harness both a relaxed, 'chilled-out' feel and an upbeat, party atmosphere and the production supports that overall feeling well.

Whilst I would have personally picked different tracks to include on this album it is generally a successful collection of songs. Interestingly, one of the things that doing this review has left me with is remembering just quite how strong Barefoot Blue Jean Night is as an album. Whilst the album is now six years old I'd actually suggest purchasing that if you want an introduction to Jake' music rather than this Greatest Hits album. The multi-faceted album showcases Jake really well and has an impressive mix of songs that will have every listener connecting with at least one. I hope we continue to see some of the more stripped back tracks sprinkled liberally throughout Jake's albums as that, in my opinion, is where he really shines and I'll certainly be interested hear what his next release brings.
Email Post
Labels: Jake Owen "Greatest Hits"