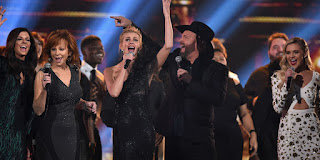 After a very strong show with an over-riding feeling of tribute and unity the CMA Awards are over for another year. Read on for a recap of the night....

Award winners (in the order they were presented)
As with past years, the awards for Musical Event, Music Video and Musician were pre-telecast awards, meaning Keith was the first to receive an award on air. There was a feeling of unity and also remembrance throughout the show this year and that under-ran a lot of the acceptance speeches which set a really nice atmosphere between the artists.

This years' awards brought an interesting mix some winners you have probably come to expect and some other pleasant surprises, with Keith taking his first ever CMA for Single Of The Year and Jon Pardi consolidating a strong year amongst others. Whilst Little Big Town only took home the one award, their sixth Vocal Group Of The Year win now also means they tie the record for most wins in the category.

Perhaps one of the biggest surprises actually only came indirectly through the presentation of an award. Many readers will already know that the Country Music Association normally announce the performers and presenters in stages before the actually show so the surprise was immediately evident throughout social media when Brad and Carrie introduced Sugarland to present the Vocal Duo Of The Year award. It was great to see Jennifer and Kristian back on the CMA stage and even more so when Jennifer hinted they may be making a return as a duo (I would recommend having a look at their website and their joint social media accounts have been re-activated, something is certainly coming!)

Performances
Whilst a few of the performances felt a little average, generally the CMAs delivered a very strong performance list, with stand-out performances coming courtesy of Little Big Town, Carrie Underwood, Miranda Lambert, Tim McGraw & Faith Hill and Chris Stapleton. In addition - whilst it was too short and I could have listened to a lot more of it - I have to highlight Eric Church's goosebump inducing a capella version of Amazing Grace which opened the whole show. It was a brilliant moment and, surprisingly, segwayed smoothly into the next performance.

Many people were intrigued to see what Carrie Underwood's performance would be after Brad Paisley hinted at it being a probable performance of the night and she didn't disappoint. With an incredibly touching performance of gospel track Softly And Tenderly she emotively paid tribute to all those that country music has lost this year, including the victims of the Route 91 Harvest Festival shooting. The emotion was particularly apparent as the names and pictures of the shooting victims scrolled across the screen behind Carrie and she was slightly overcome by it but managed to finish the song and deliver a great tribute, leaving a lot of viewers feeling very emotional. Sometimes I find Carrie's voice to be a little uncomfortable and strained when she really pushes the harsher, rockier melodies but Softly And Tenderly was pitched at just the right level to showcase Carrie's vocal at it's strongest.

Another tribute that really stood out for me - and arguably the performance of the night in my opinion - was Little Big Town and Jimmy Webb's rendition of Wichita Lineman. It was immediately a sweet moment to have the song's writer up there with the quartet but Little Big Town built on that with a performance that really played to their strengths, showcasing stunning harmonies and oozing emotion to a point where Glen's daughter Ashley (amongst many others I'm sure) was moved to tears. An unexpected performance from a quartet who were expected to sing one of the songs from their current album but undoubtedly a fitting tribute to a legend of the genre.

As with Carrie, I can find Miranda Lambert's vocal a little uncomfortable on some of the rockier tracks so her performance of To Learn Her was great to see. Supported by a traditional country influenced melody, Miranda kept her vocal soft and emotive and was visibly caught in the moment of the track. There were always going to be high expectations around a performance from Tim & Faith and they did not disappoint. Singing the latest single from their upcoming album the duo sang directly at each other but still managed to draw the huge audience in as they traded lines. Undoubtedly an incredibly strong vocal from both and a great performance all round. Supported by his wife Morgane, Chris Stapleton took to the stage to deliver an impressive performance of Broken Halos from his (CMA Award winning) new album. Everything about the performance felt completely comfortable, with Chris' distinctive vocal taking the lead through a song that was arguably his strongest CMA performance yet.

In addition, whilst I have been writing this it has come to light that Garth Brooks lip-synced his performance tonight. As I understand it is due to the strength of his voice at the moment but I am certainly disappointed to hear that he felt he needed to lip-sync.


Now in their tenth year as hosts Brad Paisley and Carrie Underwood have become a huge part of the CMAs. With an immediate tribute to victims of the multiple tragedies America has suffered this year (Brad putting it best by saying the "best way to honour our fans is to play our music") the duo set a suitably sombre tone before moving on to an opening dialogue featuring comments about CMA Guidelines on no politics, how to pronounce P!nk and reflecting upon their ten years as hosts amongst other things. Many fans who regularly watch the show will remember the duo's comments regarding Tim McGraw and Faith Hill's dolls a few years ago so one of the best moments of the opening dialogue had to be Tim and Faith surprising Brad and Carrie on stage with their own dolls and good-naturedly making fun of them whilst congratulating them on 10 years as hosts.

Overall tonight's show delivered a great portrayal of country music. Whilst as a fan of particular artists and particular songs there are always going to be things I'd change, generally there was little to fault with the show as a whole and yet again the CMAs have delivered a great show which has - yet again - left me feeling really happy to be a part of the country music community. Roll on next year!
Email Post