Gwen Sebastian - "Once Upon A Time In The West: Act 1" 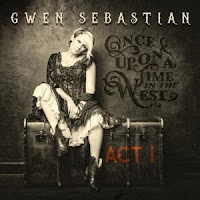 17th November marked the release of Gwen Sebastian's newest album Once Upon A Time In The West:Act 1. The 13 tracks follow 2013's self-titled release and form her fourth studio album. The various dynamics behind this album come together to create an intriguing package in which Gwen has written or co-written each of the tracks.

There are three featured artists on this album and, whilst Miranda Lambert and Ashley Monroe are of course familiar names, I hadn't encountered Blu's voice before hearing him on Cry To Jackson. Interestingly however, Cry To Jackson has quickly become one of my favourite songs from the whole release. The idea of having a male featured artist on this track in particular is inspired and Blu's impressive vocal works really well alongside Gwen's, adding a different edge to the overall sound. An incredibly sad song, Gwen delivers it with a stark vulnerability that draws you in and wraps you up in the overall listening experience.

I'm Not With The Band has a broadly similar feel and is equally as strong. An incredibly emotive lyric that Gwen portrays really well, the track showcases her at her strongest. The subtle, stripped back production offers a supportive backdrop to Gwen's vocal whilst leaving the entire focus on her, the ebb and flow of the melody allowing the track to travel smoothly and hold the attention of the listener throughout. A brave song to include and the risk has certainly paid off.

Unfortunately a few of the tracks included here aren't as strong in my opinion. The steampunk style of Ain't All That Bad for instance isn't particularly successful. It struggles to really show Gwen at her best due to continuous distorting vocal effect and the track holds a highly repetitive lyric whilst not really progressing anywhere. The instrumentalisation is quite compelling however the other parts of the song let the end-product down.

Drunk Or Stoned is also a fairly unsuccessful track. Considering the lyrical strength of some of the other songs here (and alongside stand-out tracks from Gwen's previous album such as God Bless and One Like That) it feels a little average. As with Ain't All The Bad, the electronic vocal effect distorts Gwen's voice slightly which is a shame as she's a strong vocalist and that doesn't come across so well here. There's not really enough to draw a listener back to the track time and time again in my opinion.

Overall, whilst there are a selection of tracks that struggle to really shine, Once Upon A Time In The West:Act 1 is generally a strong album. Gwen continues to build upon past releases and, whilst her distinctive tone and style might not appeal to everybody, there are certainly some real gems within this album that deserve to be discovered. Keep an eye out for Act 2! 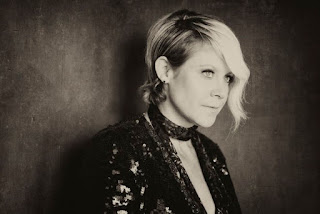 I was recently able to catch up with Gwen and ask her some questions....

It's been around four years since we last spoke, what has happened since then?

Apparently I've gotten older! [laughs] A lot has happened to be honest with you. You know I've been out on tour with Miranda Lambert - in her band - and doing a few of my own shows in between. I've moved from one end of Nashville to the next. Did I talk to you since I've gotten married? So yeah, I've been married now, to Louis my drummer - and obviously I went in and made a new record. So pretty busy! I like that though, it's hard for me to sit around unless I'm watching like a marathon of Netflix! [laughs]

You mentioned you recently released your new album, how was the experience?

I loved it! It was, for me, probably my most creative that I've done, just because I didn't care what anybody else thinks about it or thought about it. I was just basically letting all my feelings out on paper and then bringing them into the studio with great musicians. We went in and recorded this last year already, like last November of 2016 and holding on to it has been a little bit tough for me! It's just one of those things that you want everybody to hear but the recording itself was great. We went in for three days and basically laid everything down as a band because for me that's what I find most comfortable I guess, it just feels more like it's live, doing a show, instead of putting the pressure on to try and be perfect. My husband Louis Newman produced it so we collaborated prior to going into the studio, not only writing songs together and we also sat down with each song that I wanted to record and put down ideas behind it so that when we wanted to record with the band we could tell them inspirations or what I wanted it to sound like. So we spent a little more time on that aspect of it than on other albums and other recordings that I've done.

How do you feel that contributed to the overall album?

It totally was the right thing to do! It's still me and it's still the sound that I wanted but you're inspired by a bunch of different things. I was inspired by Shovels & Rope, their albums, Brandi Carlile, Audra Mae. some more like...Emmylou Harris kind of vibe, feel to it stuff...I listened a little more intently to their albums. I think I learned more and I got better at my craft doing that, listening to people that inspire me and that I think are good, it made me better at my craft.

What was the hardest part of the album process?

Waiting to release it! It's ridiculous and that wasn't planned, I did indeed on releasing it earlier, like early this year, March or so..it just wasn't right for me to do it then. I wanted to kind of...we had some things that were maybe coming down the pipe which might have changed some things so that's why I waited to be honest with you.

Were there any tracks that you'd have liked to have included on the album that you weren't album to?

No, not necessarily. It was hard to pick for sure which is why as 'Act 1' says, there is an 'Act 2' for sure coming. I decided to do a digital release and separate it all because it's too much I think for someone to intake all of it. I went in and record 18 songs and that to me would have just been too much at once. I've listened to it all the way through and it was a lot just for me to listen to! There's always songs that I look back on...there's a few songs actually that I wrote with Ashley McBryde that I really wanted to cut, that I love, but it just didn't work for this project, it just didn't fit. So there's always that aspect of it too. Of course I would love to record more tunes but what I have now I think creates a whole project and a whole sound of what it's supposed to be.

What song would you pick from this album as the best introduction to you as an artist?

It's a combination...I'm going to say two of them, "Cadillac" and then the second would be "Quicksand". Both were singles off of the album and that's the reason why I put them both as singles, they both I think coincide with each other but have opposite sides. One is more of the singer-songwriter - which is "Cadillac" which has more of a vocal thing going on - and then "Quicksand" is the groovy side of my...I guess growing up and my inspirations, music and things like that - more of the live version of me if that makes sense.

What impression would you like listeners to take away from your music?

If you could take only one non-essential item on tour what would it be and why?

Oh my gosh! Non-essential...my dogs! It me they're essential in my life for sure - maybe out on the road not necessarily! [laughs] So I would take them all the time if I could.

You mentioned you've been touring with Miranda over the past few months and you recently got to come over to the UK with her, how was the experience?

Loved it! I loved it so much as well as it's made me realise that I have to come over and do something on my own. I will, I just have to make it work. We're scheduling and...it put it bluntly...it costs a lot - which is a lot of the reason why certain artists don't do it, because they can't, they can't afford it. I'm going to make it work I promise.

Where would you like to see your music take you ultimately?

To 95 years old! I want to do it forever, that's where I want it to take me. So that I'm still loving it at 95. Which is why you have to have those slow songs in there! [laughs] Even if I'm using a walker I'm doing it!

Thanks to Gwen for her time!
Email Post
Labels: Gwen Sebastian "Once Upon A Time In The West:Act 1"