The end of the year fast approaches and Tara and I have once again brought together our thoughts on the best albums released in 2017. There are many factors that make an impressive album and each release on this list holds, in our opinions, a certain something that really makes it special. So read on, let us know your thoughts and make sure to tell us if you discover any new music through this list! 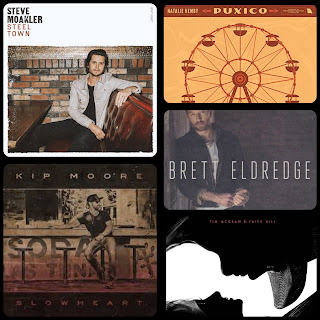 5 -- The Rest Of Our Life, Tim McGraw and Faith Hill


The balance of the two vocals intertwined on Tim McGraw and Faith Hill’s first collaborative album is just right and supports the duo throughout some remarkable performances. An album that is sure to offer at least one track a listener will find themselves drawn to – and grounded by it’s gorgeous title track – The Rest Of Our Life is certainly an impressive release that hopefully heralds many more collaborative albums from Tim and Faith.

Brett Eldredge is a multi-faceted album that showcases it’s namesake very well. Narrowing his song-writing circle with impressive results, Brett Eldredge’s third album takes you on a journey through upbeat, catchy numbers like Somethin’ I’m Good At and Superhero to slower, really emotive tracks like Brother and No Stopping You, all delivered with Brett’s distinctive vocal.

The debut album from a talented song-writer, Puxico is both intriguing and rewarding. Throughout the release it is evident that this is an album full of captivating melodies and emotive lyrics and grounded by an impressive vocal. Undoubtedly the strongest release from a solo female artist this year, Puxico is sure to leave you full of anticipation for what Natalie can produce with future albums.

Perhaps best described as ‘Heartland Rock’, Kip Moore’s third album builds upon the distinctive sound he has crafted throughout his previous two albums. Arguably one of the most under-rated male country artists, Kip has managed to craft an album that shows him at his strongest.  His gritty, gutsy style comes through strongly and His distinctive tone easily blends to the collection of tracks, leaving you with an overall impression of a natural and comfortable performance.


Wheels was the first song I heard from this album and from the moment I first listened I knew I was in for a brilliant listening experience from Steel Town as a whole. Without a doubt an album you will want to hear time and time again, Steve undoubtedly has a talent for story-telling and paints a compelling picture throughout each of the songs. Steel Town firmly plants Steve Moakler as a force to be reckoned with within country music. 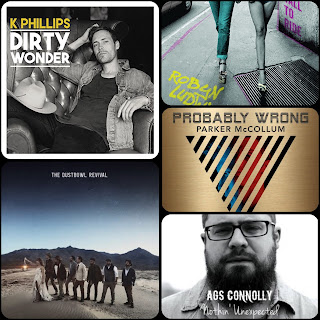 Connolly merges Western Swing, Honky Tonk, Rockabilly and Tex-Mex (Do You Realize That Now?) melodies with sincere lyrics full of depth and intensity in an album that shines.

Further showcasing his ability to craft honest, accessible tunes that never sacrifice storytelling and melodies for trends, McCollum is securing his spot as a distinctive voice in music who will not only forge his own path, but carry on the tradition of the respected Texas songwriters before him.

3 -- This Tall To Ride, Robyn Ludwick

Ludwick's album isn't sunshine and roses, but it is replete with stories and characters that make you think, feel, and yes even empathize with, because underneath the broken souls, cocaine and sex, there's a commonality simmering through the record which is the human need to make a connection and be loved, which is something we all can relate to.

With their fifth album, the California-based octet broke their own mold, building into something fresh, funky and (even more) fabulous without losing their ability to craft moving (and often times wonderfully sassy) story songs. They also, hands down, have the best song of 2017 in Got Over. If you aren't moved by this song, check your pulse.

Phillips' record was an early contender for the top spot soon after first listen. Why? Because in a world of singer-songwriters who seem to follow a formula, Phillips forges his own path. Based on experience, observation and imagination, the ten-track collection, replete with detailed, literate stories, clever allusions and well-drawn characters, is further distinguished by pedal steel, fuzzy guitars and juke-joint keys combining into a unique offering that's astute, learned, dynamic, and often, smoldering.
Email Post