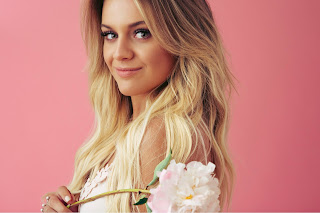 Rising star Kelsea Ballerini is fast making a name for herself within the genre. Fresh from November's release of her sophomore album Unapologetically, the talented songstress is currently in the midst of a busy touring schedule which includes stops in the UK as part of this year's Country To Country festival.
I was recently able to catch up with Kelsea and ask her some questions....

What was your first experience of country music?

When I was a little girl, my dad worked at the country music radio station in my hometown! So I grew up around it.

What career would you have if you weren’t involved in country music?

I love anything creative...maybe a hair and makeup artist.

You play guitar but if you could pick any instrument to play what would it be and why?

I think piano is so beautiful. I took lessons when I was younger but never got further than "Mary Had a Little Lamb."

What was the first song you ever wrote?

You co-wrote every song on your new album, which song was the hardest to write?

"In Between." The actual writing session was effortless, but it's just such an honest lyric that made me really dig deep which is sometimes difficult.

Which is the most enjoyable song to perform live?

How do you feel your song-writing and overall style has developed between your two albums?

It's grown up with me. I wrote my last album when I was 19 years old, and so much life happened between then and now. So I think my songwriting has just changed and evolved with me.

“The House That Built Me" by Miranda Lambert. It's so raw and those are the kind of songs that make you feel like it’s written for you. It's special.

You’ve toured with some of country music’s biggest acts, what would be your dream tour to be a part of alongside artists you haven’t already toured with?

My favorite part about opening up for artists like Rascal Flatts, Lady Antebellum, and now Keith Urban, is that I remember waiting in line to meet them and saving up to go to their shows. I’m a genuine fan of what they do, which makes them sharing their stage with me an even bigger deal.

You’re performing as part of this year’s Country To Country Festival, how did that decision come about?

I've gotten to do a couple of shows in London that are some of my favorite shows I've ever played, and then also did Glasgow and Dublin on the You Look Good World Tour last year. It is so inspiring to go so far away from where we make the music and see that it still connects. I hope to do a lot more touring in the UK in the future.

Can we expect to see the Country To Country dates built into a full tour?

Thanks to Kelsea for her time! You can find her at this year's Country To Country festival amongst various US tour dates and her new album Unapologetically is available now.