7 years of Hitting All The Right Notes! 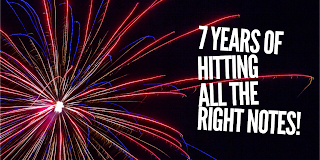 Tomorrow, March 1st, is the seventh anniversary of Hitting All The Right Notes. It was recently mentioned to me that this likely makes my lovely site the longest running country music site in the UK - which is an incredible thought! - so I want to thank you all for your support over the past seven years, whatever part you have played in the success of this site every one of you is hugely appreciated.
A huge part of why I started this site seven years ago was to introduce people to music from artists they might not have ever heard from and in the spirit of this I wanted to take a moment to acknowledge seven songs that you might have missed over the past seven years. Read on and let me know your thoughts!

Steve Moakler - Riser
Release date - 18th March 2014
Better known as the title track of Dierks Bentley's seventh studio album, a version of "Riser" was also released by song co-writer Steve Moakler. Grounded by a descriptive, emotive lyric, Steve's version of "Riser" has a similar overall sound to Dierks' but he also adds his own spin to the song which ultimately creates a very strong version. Steve's confident vocal makes his mark upon the track whilst still leaving a delicacy that is sure to intrigue listeners and ultimately creates a very compelling listen.

Striking Matches - Tell Me So
Release date - 2012
One of the tracks on the duo's debut EP, "Tell Me So" is, in my opinion the strongest song from the EP, but is also arguably the most under-rated. Released prior to Striking Matches 'breakthrough', "Tell Me So" is , at it's core, a delicate, emotive love song that showcases the duo at their very best.

Logan Brill - The Woman On Your Mind
Release date - 2nd June 2015
Quite possibly the best album release from a female country singer in recent years, 2015's "Shuteye" saw Logan Brill bring in David Nail for backing vocals on "The Woman On Your Mind". It would be true to say from first listening I loved this track and that is still the case almost three years later. The duo's voices blend effortlessly and Logan's distinctive tone takes control on a song you immediately want to hear time and time again.

Edens Edge - Christ Alone
Release date - 12th June 2012
A brave choice to close the trio's only album, "Christ Alone" is an entirely a cappella song led by the group's lead vocalist Hannah Blaylock. The full focus of this track is on the trio's slick harmonies and overall vocals, and each member of the group delivers an impressive vocal which comes together to craft a very strong overall song. A different side of the trio to what you will hear in the rest of the album, "Christ Alone" is simple and smooth and deserves to be embraced.

Josh Door - I Need A Highway
Release date - 10th November 2017
A relatively new track but an outstanding song that showcases Josh as a definite artist to watch. Featuring backing vocals from rising star Jillian Jacqueline, "I Need A Highway" is the penultimate number on Josh's latest EP and if you haven't already stumbled across this song you are certainly missing out. A distinctly personal feeling combined with a highly 'singable' quality to the chorus ground the song and strong production choices elevate it to an incredibly strong release.

The Cains Trio - Down To The Water
Release date - 21st July 2015
The steampunk styling behind this track is the thing that will first draw you in but it's the trio's vocals and the overall production that will keep you coming back for more. A compelling listen and the trio's strongest track, "Down To The Water" will add another dynamic to any country fan's music collection.

Caitlyn Smith - This Town Is Killing Me
Release date - 8th July 2016
Recently re-released as part of Caitlyn's newest album, "This Town is Killing Me" was first released in 2016 as part of Caitlyn's last EP. A gorgeous song that really draws you in to the sadness behind the lyric, Caitlyn's distinctive tone is showcased at it's best throughout a song that proves her talent as both a singer and song-writer.