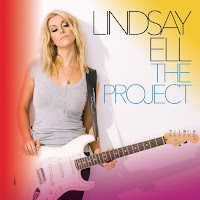 Billboard's top country album of 2017, Lindsay Ell's The Project is set to see a formal UK release on 9th March ahead of her appearances as part of this year's C2C Festival. Produced by Kristian Bush, the twelve track release is Lindsay's third album and generally showcases her very well.

For me, the strongest track here is Champagne. The bluesy instrumentalisation supports Lindsay's attitude filled vocal and the overall production makes the track one that you will want to return to time and time again. As a listener you are ultimately left with a track that blends country, pop and blues influences to create an intriguing listening experience that Lindsay controls effortlessly, sounding completely at home throughout.

Album closer Worth The Wait is another very strong track. One of the slowest tracks on the album, Worth The Wait showcases Lindsay's vulnerable side through a very emotive vocal delivery. A lyric that I'm sure will be relatable to a lot of listeners, the delicacy of the production is in stark contrast to the majority of other tracks on the album which actually only serves to heighten it's appeal because it, simply put, just works quite so well. Vocally Lindsay has nowhere to hide and she rises to the challenge, undoubtedly a compelling listen.

White Noise is one of only three tracks on the album not co-written by Lindsay and is the most successful of the three. The only negative is that the song comes very close to feeling a little too messy in the last minute however the sweet take on a love song offers a memorable chorus and infectious rhythm that comes together into what I can easily imagine being a really popular addition to a live set in particular.

Unfortunately I found myself drawing away from Space. The basic idea behind the song is strong but,
for me, it feels a little strained at points. This is particularly apparent in each chorus with the loss of the smooth, bluesy feel that is so strong in the verses. It's a shame as the verses are really compelling but it feels as though the track as a whole doesn't come together very well.

One thing that sticks out through The Project is how strong the production is on each of the tracks and how largely comfortable Lindsay's vocal sounds. Even if you find yourself not liking certain tracks it feels as though there is basically little to fault here. Generally, I really like this release and have actually found myself liking it more and more as I continue to return to it. The Project has already helped to turn Lindsay Ell into a household name within the country music community and I'm already intrigued to hear how she continues to grow with future releases.
Email Post
Labels: Lindsay Ell "The Project"