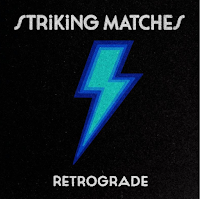 With their sophomore album expected later this year, Retrograde is the latest release from country duo Striking Matches. The three track EP was released on February 9th and sees Sarah and Justin harnessing a 'poppier', more synthetic sound than their debut album and EP but building on the sound listeners would have heard in previous EP Shameless.

Whilst I am sure many listeners will welcome this progression I actually found myself missing the sound that was showcased so well in tracks like God And You and Trouble Is As Trouble Does from the duo's debut album and, for me, the duo have lost some of their spark that made their debut EP and subsequent album quite so strong.

The most appealing track here is probably Retrograde itself. The 'funky' track has an almost disco feel which oddly is largely successful and the duo's vocals blend well. The catchy nature of the song will leave many listeners tapping their feet and singing along but unfortunately the repetitive lyrics and production feels a little grating after listening a few times. Generally Retrograde is an intriguing track that serves as a compelling EP opener.

Retrograde will certainly have many eager listeners but for me it ultimately feels a little overproduced, lacking the natural feeling of previous Striking Matches releases. If you haven't listened to Striking Matches before I'd recommend their debut album Nothing But The Silence rather than this EP - both Sarah and Justin are very talented and I've been a fan of theirs for a while but the selection of songs here just doesn't seem to 'fit'.
Email Post
Labels: Striking Matches "Retrograde"